The global gibberellins market size was worth USD 703.6 million in 2019 and is projected to expand at a compound annual growth rate (CAGR) of 8.8% from 2020 to 2025. The growing global population and decreasing area for cultivation are anticipated to drive the product demand over the forecast period. Gibberellins control cell elongation, stimulates the extension growth, delay aging, and increases the rate of fruit production in plants.

The growing demand for fine quality vegetables & fruits has increased the utilization of gibberellin in the agriculture industry. Farmers prefer this product as it fosters the growth of plants under uncontrollable and unpredictable environments. Gibberellins are majorly used for the production of apples and grapes. 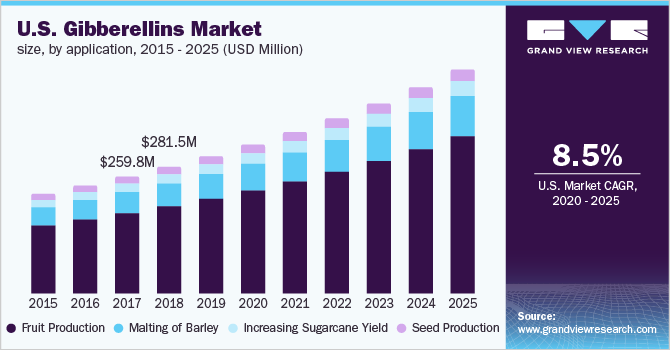 The U.S. market is driven by the growing demand for high agricultural yield, good quality fruits & vegetables, and the growing beer industry. According to the Brewers Association, the number of breweries in the U.S. increased by 16.6% to reach 5,301 in 2016 on account of the rapidly rising demand for craft beer. This has led to high demand for new malt flavors in order to maintain product differentiation.

Numerous economies across the world depend on imports to meet their fruit and vegetable demand. The emerging economies are increasingly focusing on enhancing their crop production yield in order to achieve self-sufficiency. This is likely to augment the demand for gibberellins over the coming years.

Consumer demand for organically produced goods continues to grow significantly. Organic products account for over 4.0% of the total food sales in the U.S. Increasing consumer awareness regarding health, environment, and animal welfare is likely to increase the use of organic products, thereby augmenting the use of gibberellins over the next eight years.

Numerous plant growth regulators like auxins, cytokinins, abscisic acid, ethylene, and gibberellins are available in the market. Factors such as high consumer awareness regarding cytokinins and auxins and low cost of the aforementioned products in comparison to gibberellins are likely to restrain the market growth over the next eight years.

Growing demand for fruits & vegetables on account of expanding the food & beverages industry is expected to augment demand over the forecast period. In addition, augmenting demand for craft beer is likely to propel the utilization of gibberellins for increasing malt production over the next eight years. Moreover, declining agricultural cultivation area worldwide and changing climatic conditions leading to a decrease in crop yield is anticipated to augment the market growth over the coming years.

Malting of barley is predicted to witness considerable growth over the forecast period on account of the growing beer industry. Penetration of craft beer is high in developed economies including U.S. and UK owing to the high consumer awareness regarding its benefits as compared to other alcoholic drinks. In addition, the growing youth population in emerging economies is further anticipated to augment the market growth.

The decreasing area under agricultural cultivation and growing global population are anticipated to drive demand for gibberellin products over the forecast period. Gibberellins delay aging, control cell elongation, stimulate extension growth of plants and increase the rate of fruit production in the plants. The use of gibberellic acid on plants increase crop yield, enable plant metabolism and plant metabolism, Allow the production of the bigger root system, and bigger leaves, and increase cell growth in leaves, stems, and roots.

The global beer industry has grown significantly in the past two decades. The number of brewers in the global market has increased at a faster rate. As a result, the demand for grains such as wheat, sugar, and yeast is likely to increase which is further expected to increase the demand for gibberellins in the market.

Malting of the barley application segment accounted for a revenue share of 17.2% of the global market in 2016. Asia Pacific is expected to witness the fastest growth on account of rising barley malting units. The rising inclination of international brewers toward emerging economies is expected to positively impact the gibberellins market over the next eight years.

The fruit production application segment dominated the global market in 2016, signifying a CAGR of 9.1% from 2017 to 2025. The product is used on a commercial scale for a variety of fruits and vegetables for breakage of dormancy, stimulation of bud break, increasing lateral branching, stimulation & reduction of fruit set, and increasing the fruit size & quality. 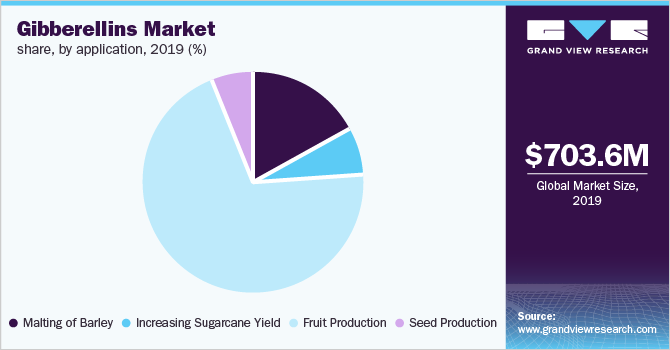 Rapidly growing fruit and vegetable demand globally is likely to promote production in Asia Pacific and Central & South American countries for exports. This is expected to propel the use of gibberellin for improving the yield and quality of agricultural products.

Sugarcane is generally considered as a tropical plant and is grown in areas with a warm climate and adequate rainfall. Favorable climatic conditions ensure high sugar content in the plant. The prevalence of cold climatic conditions in North America and Europe is likely to augment gibberellin demand for sugarcane production in these regions.

North America dominated the global market in 2019 and recorded a CAGR of 8.7% from 2017 to 2025 on account of extensive research and development by companies in the region. The high adoption rate of new products and the production of fruits & vegetables and barley malt in the region are expected to positively impact the demand over the forecast period.

North America is the largest market for gibberellin on account of extensive research and development by companies in the region. Companies including Valent Corporation and Fine Americas Inc. have been involved in the development of new products. The companies have registered new products with GA4 & GA7, which are much more effective as compared to other gibberellins. The high adoption rate of new products in the region and high production of fruits & vegetables and barley malt are expected to positively impact the demand over the forecast period.

Europe accounted for a 24.7% share in 2016 and the region is expected to witness considerable growth over the coming years on account of high awareness regarding the benefits of plant growth regulators. Europe exports large quantities of fruits and vegetables within the region as well as to other economies, which is likely to augment the utilization of this product over the next eight years. 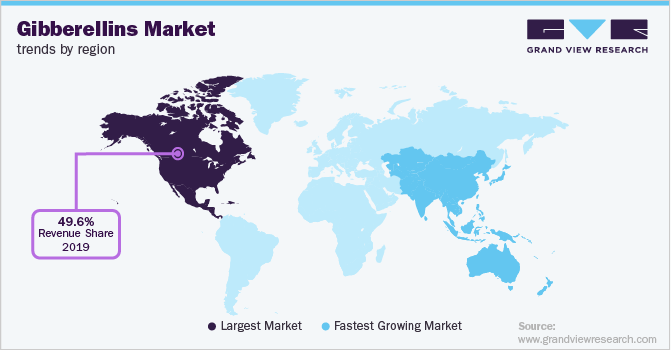 In order to cater to the new demand, the existing and new entrants have invested in new wineries, breweries, and distilleries. North America and Europe are the major markets for the brewery industry and is expected to grow at a significant rate over the coming years. Increased investment and demand for alcoholic-beverages are expected to fuel the growth of the brewing industry as a result increase in the growth of the gibberellins market over the forecast period.

The European region is expected to witness growth in the demand for the product on account of high awareness regarding the benefits of plant growth regulators. High malt production coupled, Unfavorable climatic conditions, and high demand for fruits and vegetables within the region in various countries is expected to increase the utilization of gibberellins for increasing agricultural yield over the next eight years

Asia Pacific has numerous tropical countries including India, Indonesia, Malaysia, Myanmar, Singapore, Philippines, and Thailand. The crop production in tropical areas is generally small scale and labor-intensive. Gibberellins will create a huge opportunity for these regions in terms of reduction in production cost and increase in yield & quality.

The international brewing companies have shifted their focus towards emerging economies in order to strengthen their global market position. This is likely to increase the malt production in economies including India, Vietnam, Australia, and other southeast Asian countries over the forecast period. The Asia Pacific includes numerous tropical countries including Thailand, India, Malaysia, Indonesia, Myanmar, Singapore, Philippines, etc. The crop production in tropical areas is generally labor-intensive and small-scale. Gibberellins create huge opportunities for these regions in terms of reduction in production cost and increase in yield & quality.

Low awareness about the benefits of gibberellins coupled with high cost is the key reason for less usage in emerging economies. In addition, diversity in fruits & vegetables, production systems, and consumption patterns also affect the demand.

Companies such as Valent U.S.A. Corporation; Nufarm Ltd.; Sichuan Guoguang Agrochemical Co. Ltd.; and Fine Americas, Inc. are the key players in the market. The companies utilize the fermentation process for the manufacturing of gibberellin on a commercial scale.

As per a report of Michigan State University published in May 2017, Gibberellin is available in blueberry seeds naturally. In well-pollinated berries, it occurs naturally and also promoted growth naturally. They are labeled for highbush blueberries, including ProGibb 40%, ProGibb 4%, ProGibb 4LV Plus 5.7% (Valent BioSciences), and several formulations of GibGro 4% (NuFarm Americas).

This report forecasts revenue growth at a global, regional & country level, and provides an analysis of the industry trends in each of the sub-segments from 2014 to 2025. For the purpose of this study, Grand View Research has segmented the global gibberellins market on the basis of application, and region: 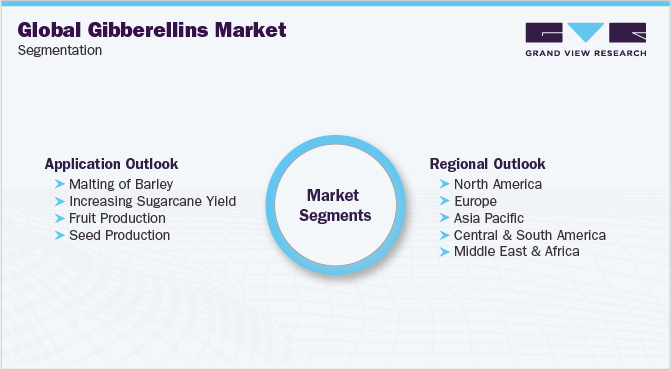