The global flat glass market size was estimated at USD 145.13 billion in 2018 and is projected to witness a CAGR of 10.3% from 2018 to 2025. The consumption of glass as a building material is increasing considering the negative impact of existing construction materials on human health and the environment. Hence, increasing consumption of glass in infrastructure is expected to drive the global market.

Over 90% of the flat glass is produced by the float process, which enables significant reduction in cost, and enhances the product quality in comparison to rolled process. Hence, it is the most preferred production process in the industry. 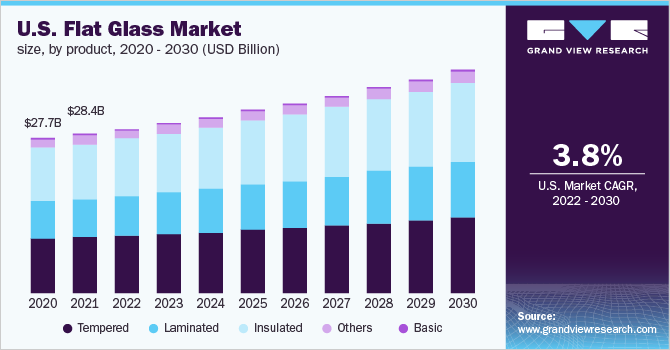 Growth of the building & construction industry is the major driver for the market. The industry has witnessed considerable growth past few years and is anticipated to grow at a CAGR of 6% over the coming few years. The growth is significant in all regions, especially in Middle East & Africa. Government initiatives towards infrastructural development in African countries is propelling the industry growth.

For instance, Kenyan government made an investment of USD 14.5 billion for building a technology hub in Nairobi. The project received an injection worth USD 100 million from Microsoft in May 2019.

Also, the GCC construction sector is anticipated to witness strong on account of increasing oil prices and resurgence in the economy.

In terms of revenue, Asia Pacific was largest segment in 2018, and this trend is anticipated to continue over the forecast period. The growth in the region is attributable to the rapid infrastructural developments in the Southeast Asian countries. Jewel Changi Airport (Singapore) that opened in April, 2019 is the latest example when considering the application of glass in the South East Asia construction industry.

The solar industry has witnessed a tremendous growth past years. The global solar capacity grew at a CAGR of 29.9% from 2013 to 2017. Factors such as depletion of renewable resources, advancements in technology, government regulations, environmental concerns, reduction in cost of solar installations, and growing electricity demand are propelling the installation of new solar plants worldwide.

The market growth is expected to be hindered by one major challenge, which is the high manufacturing cost of flat glass. Its production is a capital intensive process, which requires high capacity utilization to achieve profits.

Based on product type, the flat glass market is segmented into tempered, laminated, basic, insulated, and others. In terms of volume, tempered glass accounted for a share of 29.4% in 2018. It is widely used in construction, automotive, electronic products, and solar panels. In the automotive industry, it is used in windows of passenger cars. It is four to five times stronger than the basic glass, which is likely to fuel its utilization over the forecast period.

In terms of revenue, insulated segment was the largest in 2018. Insulated glass is formed by double glazing method, wherein layers of window panes are separated by vacuum or gas, so as to reduce heat transfer. It is widely used in residential windows and places where security is of vital importance such as armored vehicles, jewelry stores, and government buildings. It saves energy by retaining the heat in winters and keeping it out in summers, also, it is hard to break, which makes it significant in security-related applications.

Architectural was the largest application segment of the flat glass market and accounted for 79.0%, in terms of volume, in 2018. The large share is attributable to the usage of flat glass in both interior and exterior applications, such as, windows & sliding doors, cladding, sky roofs, partitions, railing, and beams & floors. Also, in refurbishment and furniture applications.

In terms of volume, automotive was the second largest application segment of the market in 2018. Tempered and laminated are extensively used in the automotive industry. Their applications are spread across windows, doors, windshields, side panels, sunroofs, and lights. The growing demand for the product has propelled manufacturers to expand their production capacities. For instance, in April 2018, Saint-Gobain took a 50% stake in the production line of a Chinese company, to support its automotive glass product manufacturing. 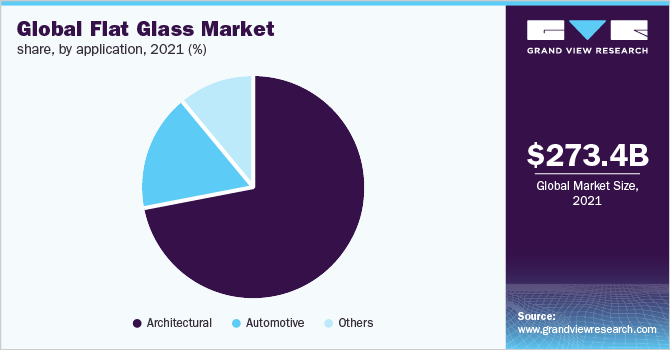 The other applications include solar, appliances, and electronics. Flat glass plays a significant role in the solar panel production, as it protects the PV cells from external forces like weather, hail, and airborne debris. Increasing solar PV capacity and construction of solar farms is anticipated to boost product consumption in solar industry. For instance, in March 2018, operations of a floating solar mega-power plant began in Japan, which includes 50,904 solar panels.

In terms of revenue, Asia Pacific was the largest regional segment in 2018 and it accounted for a revenue share of 49.8% of the global flat glass market. The growth of the region is attributable to the factors like infrastructural developments in the developing economies, increasing automotive production, and growing demand for solar energy.

For instance, India is expected to invest over USD 54.0 billion to reach solar power generation capacity of 77,000 MW by 2022. China is a major contributor towards the overall Asia Pacific construction industry and to the solar panel production. The production of solar panels is highest in China, and the products are exported to various other countries.

The market in North America is forecast to register a growth rate of 10.3%, in terms of revenue. The increasing use of glass in buildings and growing demand for solar panels in the U.S. is driving the market. The imposition of tariffs on solar cells and panels have opened wide opportunties for the solar panel production to flourish in the U.S. in coming years.

The growth rates in Central & South America and Middle East & Africa are anticipated to be fastest, owing to rapid demand from automotive and construction industries. For instance, the automotive production in Central & South America grew by 19.3% in 2017 from 2016. The growth in the construction industry of African countries have boosted the production of flat glass in the region. For example, in May 2018, MIGA issued guarantees for building a float glass plant in Nigeria.

The market is dominated by major players such as Saint-Gobain, Nippon Sheet Glass Co. Ltd., Guardian Industries, SCHOTT AG, Şişecam Group, Vitro, and Xinyi Glass Holdings Limited. Increasing production capacity is a key strategic initiative adopted by most of the key players of the industry.

For example, in October 2018, Nippon Sheet Glass Co. Ltd., announced construction of a new float glass plant in Buenos Aires, Argentina. The plant is expected to be operational by 2020, and investment in the new plant was done to cater to the rising demands for automotive and architectural glass products in Argentina.

This report forecasts revenue and volume growth at country & regional levels, and provides an analysis of the industry trends in each of the sub-segments from 2014 to 2025. For the purpose of this study, Grand View Research has segmented the global flat glass market report on the basis of product, application, and region: