The global smart cities market size was valued at USD 83.9 billion in 2019 and is expected to register a CAGR of 24.7% from 2020 to 2027. With the growing awareness about ‘smart everything’, the smart cities concept has also been gathering increasing attention, which is essentially the end result of all the intermediary technologies. Moreover, support from central/federal governments, city governments, and dedicated governing bodies has been the major contributor to driving the market globally. Additionally, funding and financing models, governance structures, technology ecosystems, and advancements in infrastructure are playing an important role in the deployment of smart cities. 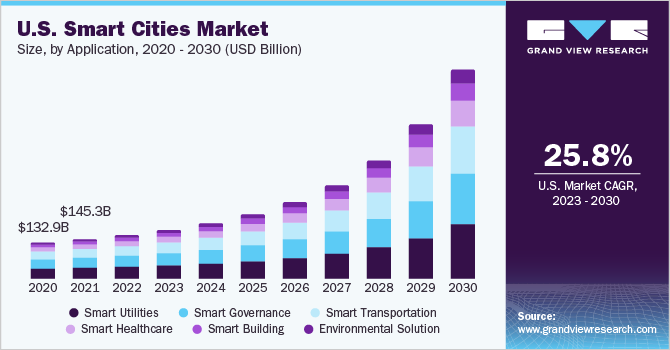 Smart cities leverage the available technologies and innovations to enhance the living conditions of its residents. According to the ‘2018 Revision of World Urbanization Prospects’ report published by the UN Department of Economic and Social Affairs (UN DESA), the current urban population of 55.0% is expected to increase to 68.0% by 2050. Demand for sustainable infrastructure owing to increasing population and urbanization has become a key driver for the growth of the market. Governments across the world are trying to tackle problems that arise due to the rapidly growing population and urbanization through smart city initiatives across domains such as mobility, utility management, and safety. Furthermore, an increase in traffic congestion and greenhouse gas emissions drive the adoption of intelligent mobility and efficient energy management applications.

Driven by recent technological advancements in domains such as healthcare, transport, energy, governance, and intelligence gathering, the market is anticipated to witness lucrative growth in the coming years. Smart cities benefit from the adoption of technologies such as Internet of Things, cloud computing, big data, cognitive computing, and open data. Moreover, increasing implementation of different Public Private Partnership (PPP) models such as BOO, BOT, OBM, and BOM is driving the successful project execution of smart cities. Furthermore, recent announcements made by the U.K. government to raise a substantial amount for its smart cities projects and the Indian government’s Smart Cities Mission are likely to contribute to the growth of smart cities projects.

Though developers of smart cities make use of a diverse range of technologies and smart sensors, the application areas differ from city to city or community to community. The need for developing resilient cities, saving energy, and building a sharing economy also play a significant role in driving the smart city market. Moreover, companies are investing significantly in Research and Development (R&D) activities to introduce new technologies for connected infrastructure in cities. Cisco Systems, Siemens AG, and IBM Corporation among others are prominent technology companies that are investing substantially in R&D activities related to connected infrastructure, which are instrumental in the development of smart cities across the world.

Technologies such as big data, cloud computing, and Internet of Things (IoT) have helped bring about innovation by integrating the internet in everyday human functions, thereby simplifying and improving human life. Over the coming years, advancements in the field of artificial intelligence are expected to lay the foundation for the development of technologies that would affect human life to a significant extent. Moreover, the development of technologies such as electric vehicles and renewable energy systems would significantly contribute toward the development of smart cities. Thus, technology proliferation in the coming years is likely to boost the growth prospects of city infrastructure stakeholders.

The adoption of governance and financial funding models has a direct impact on the design, development, and execution of smart cities projects. Project implementation and deployment timelines are significantly impacted by the governance and funding model. Smart cities encapsulate both technology and infrastructure and its convergence at different constructs of the city. As a result, different entities are involved in the planning, implementation, and operation of the projects. This complex structure has resulted in a labyrinth of institutions that are involved in the governance of cities. However, certain frameworks have evolved for the implementation of smart city projects. These frameworks involve different levels of participation from the state, local, and federal governments. In addition, the private sector has been taking up different roles including that of service providers, collaborators, and financiers.

While the traditional methods of financing projects such as debt instruments still exist, numerous new methods of financing smart city projects have been emerging owing to their multi-disciplinary nature. An important aspect of investing in smart cities is the divergent nature of funding sources driven by the nature of the projects and regional/local economy. While some projects are funded by public private partnerships, many projects are solely funded by the state or local administration.

On the basis of application, the smart cities market has been segmented into smart governance, building, environmental solutions, utilities, transportation, and healthcare. The utility segment accounted for a significant share in 2019 and is also anticipated to witness lucrative growth over the forecast period. Numerous countries are focusing on deploying digital technologies for the distribution and billing of electricity, water, and Liquefied Petroleum Gas (LPG) to residents to improve delivery and also to effectively monitor usage. The segment growth is driven by the rising demand for energy grids and smart meters in urban areas owing to the increasing need for controlling energy usage and developing sustainable communities. 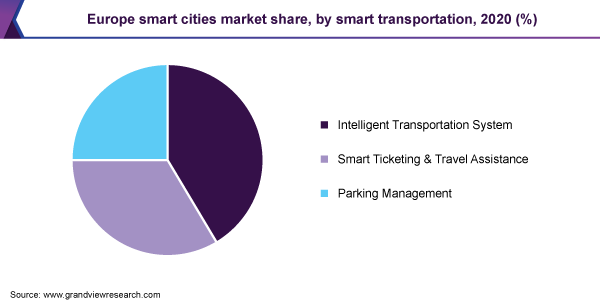 The smart transportation and building segments are also expected to exhibit significant growth over the forecast period owing to the increasing government initiatives to improve public transportation systems and the consumption and generation of renewable energy. Governing bodies across the globe are focusing on developing their infrastructure in line with technological advancements, further driving the growth of the segments.

The market is witnessing significant growth in almost all regions. The European market accounted for a significant share in 2019 as it exhibited a more developed marketplace when compared to other regions. The European Union’s initiatives, combined with major development projects initiated by the local governing bodies, has increased the adoption of smart cities in the region. In addition, multiple factors such as funding and financing models, governance structures, technology ecosystems, and developed infrastructure play an important role in driving the regional market growth.

The Asia Pacific region is anticipated to be the fastest-growing market over the forecast period due to the increasing demand for intelligent solutions for energy management, infrastructure management, and transportation. Increasing migration to cities is also a key factor that would positively affect the demand for intelligent solutions for urban regions in order to provide facilities to the rapidly growing population.

The industry may witness a rise in small companies that cater to the niche markets and offer customized solutions with limited scope. However, the marketplace would be dominated by large technology giants. The industry is also marked with a growing number of collaborations between governments and companies to develop and implement pilot projects. Key players focus on the development and deployment of customized solutions in the areas of city surveillance, energy management, transportation, and utilities among others. A few companies are also playing the role of system integrators.

This report forecasts revenue growth at global, regional, and country levels and provides an analysis of latest industry trends in each of the sub-segments from 2016 to 2027. For the purpose of this study, Grand View Research has segmented the global smart cities market report on the basis of application and region:

What is the expected CAGR of smart cities market over the forecast period?

What is the key growth driver for the global smart cities market?

b. Factors such as Government initiatives, support from city governments and demand for sustainable infrastructure owing to increase in population and urbanization will be the key growth drivers for the global smart cities market.

Which region is expected to witness growth over the forecast period?

b. In 2019, Europe held the largest share in Smart Cities market and is expected to exhibit growth in coming period. However, Asia Pacific is anticipated to be the fastest growing market over the forecast period.

Who are the key players in the smart cities market?