The GLP-1 receptor agonist market size was valued at USD 11.3 billion in 2019 and is anticipated to grow at a compound annual growth rate (CAGR) of 6.1% from 2020 to 2027. Formulation advancements of GLP-1 receptor agonist coupled with the presence of robust product pipeline is expected to drive the market over the forecast period. As per the International Diabetes Federation in 2019, around 463 million people aged 20 - 79 years were estimated to be diabetic worldwide. Furthermore, overweight and obese people are exposed to the risks of developing diabetes and cardiovascular diseases. According to WHO, in 2016, over 1.9 billion adults were found to be overweight which may result in increased usage of GLP-1 receptor agonist. 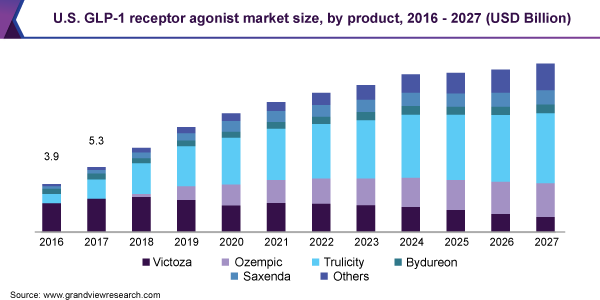 Innovative products are being developed which are expected to accelerate the growth of the market for GLP-1 receptor agonist. Pharmaceutical companies are making innovations in terms of formulations, improved bioavailability, combination therapies, and route of administration. For instance, in September 2019, Novo Nordisk introduced Rybelsus in the U.S. market for GLP-1 receptor agonist. It is the first once-weekly oral semaglutide based tablet and has been found to be more effective than conventional treatment options for the reduction of HbA1C and mean change of body weight in the clinical studies.

In addition, companies are engaged in developing novel GLP-1 products. For instance, Sanofi in collaboration with HanmiPharm.Co., Ltd are developing efpeglenatide, a GLP-1 receptor agonist for type 2 diabetes and obesity. It is currently undergoing phase-3study. Furthermore, Boehringer Ingelheim and Zealand Pharma A/S announced the initiation of phase 2 clinical trial for its dual-acting GLP-1/glucagon receptor agonist, BI 456906 in September 2019. The strong product pipeline is anticipated to propel the growth of the GLP-1 receptor agonist market.

However, product failure is expected to limit the growth of the market for GLP-1 receptor agonist. For instance, in July 2017, GlaxoSmithKline plc.discontinued the sales and manufacturing of Tanzeum (albiglutide) due to the declining sales and limited prescribing of the product. The product was associated with serious risks and limitations such as renal impairment, pancreatitis, diabetic ketoacidosis. Furthermore, the product was not recommended for patients with a history of medullary thyroid carcinoma, multiple endocrine neoplasia syndrome type 2, or serious hypersensitivity to the medication.

The Trulicity segment accounted for the largest market share of 38.0% in 2019. In 2018, the sales of Trulicity increased by 58.0% in the U.S. market, whereas in the rest of the world, the sales increased by 63.0% majorly due to increased demand for the product and growing product penetration in developing countries. 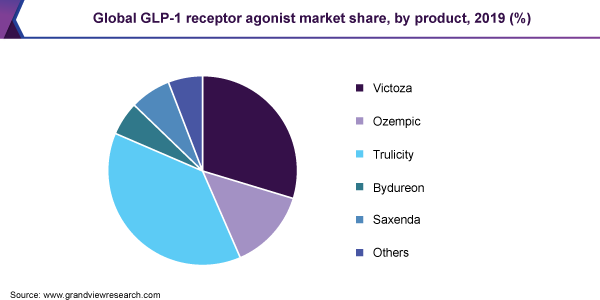 Furthermore, Ozempic is expected to be the fastest-growing segment in the market for GLP-1 receptor agonist over the forecast period. The growth is due to the benefits associated with the products such as cardiovascular risk reduction, weight loss, and controlled HbA1C levels. It is a once-weekly injectable GLP-1 analog for Type 2 Diabetes Mellitus, introduced by Novo Nordisk in the U.S. in January 2018, followed by Europe and Japan in February and March respectively.

North America held the largest market share of 72.0% in 2019 owing to the factors such as the increased usage of GLP-1 products and rise in R&D expenditure by the government. A well-established biopharmaceutical and pharmaceutical industry is also estimated to contribute to maintain dominance over the coming years in this region.

Asia Pacific is expected to be the fastest-growing region in the market for GLP-1 receptor agonist over the forecast period. The factors contributing to its fastest growth are increasing incidence of metabolic diseases like diabetes and obesity in China and Australia, high untapped opportunities, and increasing investments in the R&D sector.

Key players are adopting different strategies such as mergers and acquisitions and geographic expansion to increase their share in the market for GLP-1 receptor agonist. For instance, in January 2020, Sanofi announced the acquisition of Synthorx, Inc. This acquisition will help the company for the development of its product portfolio by the expanded genetic alphabet platform technology and in generating revenue in the coming years.

In addition, Novo Nordisk announced the investment for establishing a new production facility in 2018, for a range of diabetes active pharmaceutical ingredients located in Clayton, North Carolina, and a new diabetes filling capacity in Hillerød, Denmark to address the unmet needs of the population.

Furthermore, research collaborations between companies for the development of novel products are also taking place to get the hold on the market for GLP-1 receptor agonist. For instance, in December 2018, Eli Lilly and Company with Boehringer Ingelheim entered into a collaboration with Duke Clinical Research Institute (DCRI) for the development of type 2 diabetes and cardiovascular disease treatment. Some of the key players in the GLP-1 receptor agonist market include:

This report forecasts revenue growth at global, regional, and country levels and provides an analysis on the latest industry trends in each of the sub-segments from 2016 to 2027. For the purpose of this study, Grand View Research has segmented the global GLP-1 receptor agonist market report based on product and region:

How big is the GLP-1 receptor agonist market?

What is the GLP-1 receptor agonist market growth?

b. North America dominated the GLP-1 receptor agonist market with a share of 72.0% in 2019. This is attributable to increased usage of GLP-1 products and rise in R&D expenditure by government.

Who are the key players in GLP-1 receptor agonist market?

b. Some key players operating in the GLP-1 receptor agonist market include Eli Lilly and Company, Sanofi, Novo Nordisk A/S, and AstraZeneca.

What are the factors driving the GLP-1 receptor agonist market?

b. Key factors that are driving the market growth include formulation advancements of GLP-1 receptor agonist coupled with presence of robust product pipeline.