The global glucaric acid market size was estimated at USD 550.4 million in 2016 on account of increasing demand from detergents, soaps, food ingredients, corrosion inhibitors, and de-icing applications. The ban on the use of phosphates in detergents due to their toxic nature has increased glucaric acid demand in this application.

Pure glucaric acid was the most widely used product in the U.S. in 2016. Its demand is expected to grow on account of stringent regulations restricting the use of harmful chemicals, in order to curtail environmental damage. Growing liquid detergent industry, which was the largest consumer of this product in 2016, is expected to play a key role in propelling market demand.

The U.S. was one of the major producers of glucose, which is the primary raw material for manufacturing glucaric acid, in 2016. Due to this reason, major manufacturers of this product are headquartered in this country.

The U.S. Department of Energy (DOE) identified glucaric acid as one of the top chemicals made from renewable sources. Apart from the above mentioned applications, utilizing glucaric acid in polymer manufacturing is expected to provide a positive outlook for industry growth.

Calcium D-glucarate is projected to grow at a CAGR of 8.4% by value, from 2017 to 2025on account of wide applications in the food industry optimizing the levels of vitamins and minerals in the body, thus, safeguarding vital organs such as lungs and liver.

D-glucaric acid-1,4-lactone, one of the widely used derivatives, is projected to grow at the second-highest CAGR of 10.4% by value, from 2017 to 2025. This product, which is used in the treatment of cancer has witnessed growing demand from the emerging Asia Pacific medical sector, especially from countries with a high prevalence of this disease, such as China and India.

Food ingredients, detergents, corrosion inhibitors, and de-icing chemicals were key applications of glucaric acid, in 2016. The detergent industry was the largest consumer of this product followed by food. 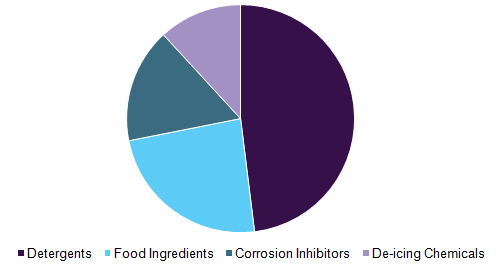 The demand for the product in detergent manufacturing witnessed a boost due to the ban on the use of phosphates, particularly in liquid detergents. Growing demand for biodegradable cleaners is also expected to have a positive impact on the glucaric acid market over the next eight years.

Glucaric acid also found application in food ingredients, which accounted for 22.1% of the market by revenue in 2016. Growing awareness about the importance of this product in maintaining the levels of essential nutrients has resulted in increased consumption in everyday meals, which has played a key role in driving its demand.

The Asia Pacific region witnessed the highest demand for glucaric acid and its derivatives in 2016. This region is also expected to grow at the highest CAGR of 11.6% from 2017 to 2025. Growing demand for this product from the detergent and food industry, especially in emerging countries such as China and India, has propelled market growth over the next eight years.

Most of the manufacturing of this product takes place in this region. China, India, and Taiwan are known to possess abundant raw material sources and cheaper labor, as compared to European and North American countries. Thus, major players including Rivertop and Rennovia have established manufacturing facilities in these emerging countries of Asia Pacific.

North America held the second-largest share of 22.6% by revenue, in 2016. The market in this region is dominated by the U.S., which was the pioneer in introducing this product. Since it is an organic product, the use of glucaric acid in this country has been encouraged by the governing bodies such as Environmental Protection Agency (EPA), further triggering market demand.

Since it is a new product in the market, these players are constantly aiming at consolidating their positions through strategic investments in R&D. For instance, Rivertop Renewables developed an oxidation platform for manufacturing glucaric acid, which ensured a high yield of the product, as compared to traditional feedstock methods.

This report forecasts revenue growth at global, regional & country levels and provides an analysis on the industry trends in each of the sub-segments from 2014 to 2025. For the purpose of this study, Grand View Research has segmented the global glucaric acid market on the basis of product, application, & region: