The global gluten-free pizza crust market size was valued at USD 2.0 billion in 2018 and is anticipated to expand at a CAGR of 6.5% over the forecast period. Increasing urbanization and growing popularity of western foods including pizza are driving the market for gluten-free pizza crust. Increasing disposable income and penetration of pizza outlets are expected to increase demand for pizza crust over the forecast period. 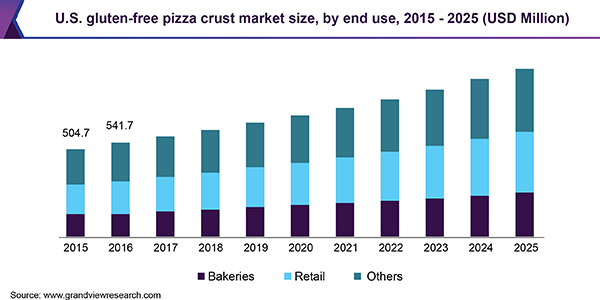 Growing awareness related to health among people and increase in prevalence of celiac disease are expected to fuel demand for gluten-free food products including pizza crust. Celiac disease is one of the major autoimmune disorders, which occur in genetically predisposed person where the consumption of gluten leads to damage in the small intestine. The disease is estimated to affect 1 in 100 people worldwide. In America, an estimated 1 in 133 people are having celiac disease.

The organic segment is expected to expand at a CAGR of 6.9% over the forecast period. Demand for organic products is growing in developed countries such as U.S. and Germany owing to increasing awareness related to the harmful effects of synthetic ingredients. Furthermore, growing product visibility is expected to provide growth opportunity for the organic gluten-free crust market over the forecast period.

Retail was the largest segment and it generated a revenue of USD 713.2 million in 2018. Increase in the penetration of retail outlet and supermarkets and hypermarkets is expected to drive the sale of pizza crust through retail outlet over the forecast period. An increase in the number of independent grocery stores is a key factor driving the product demand over the forecast period.

The offline segment held 88.8% share of global revenue in 2018. This segment is expected to maintain its lead throughout the forecast period. Increase in the number of franchise outlets worldwide is driving the sales of gluten-free pizza crust through the offline channel over the forecast period. In addition, franchise outlets such as Dominos are expanding their gluten-free product line in order to cater to the demand of health conscious people. For instance, Cali’flour Foods has been providing the maximum offline pizza crust to different retail shops. 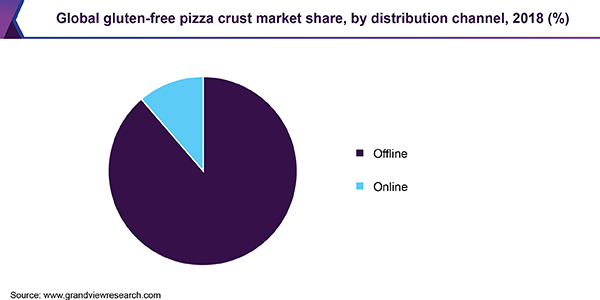 Growing popularity of western food in developing countries such as India and China is expected to drive sale of pizza crust through offline channel. It was surveyed that the maximum number of tourists arrive in Asia Pacific mainly in countries like India, China, and Thailand, which, in turn, is expected to drive the market for gluten-free products, including pizza crust.

The online segment is projected to expand at a CAGR of 8.2% from 2019 to 2025 on account of increasing internet penetration. Technology advancements are one of the significant factors in driving the online segment. Many e-commerce vendors such as Walmart and Amazon are expanding their reach in developing countries and are focusing on expanding food products offerings. Increasing penetration of small players who are focusing on online channel to expand their product reach is expected to have a positive impact on the market growth from 2019 to 2025. Increasing internet penetration in countries such as China, India, and other Southeast Asian countries is expected fuel the demand for the sale of pizza crust though the online channel over the forecast period.

Asia Pacific is expected to expand at a CAGR of 7.1% over the forecast period. It has been surveyed that India has over half of the population below the age of 30 and is known to be the most significant region for young generation, thereafter China, Indonesia, and U.S. Thus, the impact of western culture is increasing due to high youth population. This, in turn, is anticipated to drive the market for gluten-free pizza crust in developing countries of Asia Pacific.

Increasing competition in the pizza market is expected to fuel the demand for gluten-free pizza crust over the forecast period. The global market is moving towards fragmentation. Prominent vendors operating in the market are based in the U.S. and Europe. Some of the major players of the market are Udi's Gluten Free; Rich Products Corporation; Gillian’s Foods; Conagra Brands, Inc.; Kinnikinnick Foods Inc.; Rizzuto Foods.; Vicolo; and MOONLIGHT PIZZA COMPANY. The manufacturers are focusing on expanding their sales or business by broadening their product offerings or setting up new production plants in the global market.

This report forecasts revenue growth at the global, regional, and country levels and provides an analysis of the latest industry trends in each of the sub-segments from 2015 to 2025. For the purpose of this study, Grand View Research has segmented the global gluten-free pizza crust market report on the basis of product, end-use, distribution channel, and region:

How big is the gluten free pizza crust market?

What is the gluten free pizza crust market growth?

b. Conventional products dominated the gluten-free pizza crust market with a share of 67.2% in 2019. This is attributed to the hectic lifestyle of consumers has led them to seek convenient food solutions.

Who are the key players in gluten free pizza crust market?

What are the factors driving the gluten-free pizza crust market?

b. Key factors that are driving the market growth include increasing urbanization, growing popularity of western foods, and increase in prevalence of celiac diseases.