The global guidewires market size was estimated at USD 1.89 billion in 2018 and is projected to expand at a CAGR of 6.3% over the forecast period. Rising preference for minimally invasive surgical procedures owing to advantages such as smaller incisions, faster recovery time, and reduced pain is boosting the growth. Furthermore, technological advancements and rise in geriatric population prone to various chronic diseases such as cardiovascular diseases, urological diseases, and neurovascular disorders, are few other factors driving the market.

As per the World Health Organization (WHO) estimates from 2018, global population aged 60 years and above is expected to grow from 12% in 2015 to 22% by 2050. Elderly population suffering from cardiovascular diseases imposes a burden on the healthcare system. According to the World Bank estimates, in 2017, nearly 27.04% of total population in Japan was aged 65 years and above as compared to nearly 25% in 2015. Prevalence of cardiovascular diseases increases with age, and is expected to boost the demand for guidewires in surgical interventions. Thus, rising geriatric population is one of the key drivers for this market. 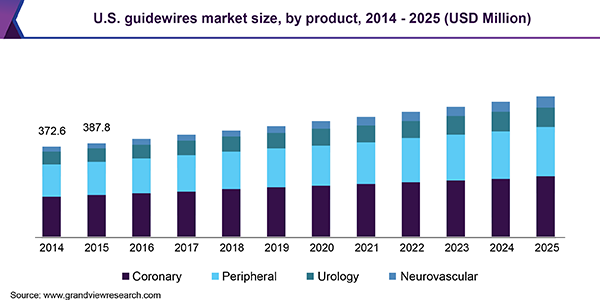 Moreover, adoption of unhealthy lifestyles such as lack of physical activities, sedentary work life, high alcohol and tobacco consumption, and high intake of saturated fats and sugars are rising among the adult population. These factors increase the risk of chronic diseases such as obesity, diabetes, and cardiovascular diseases, which might lead to surgical interventions with a disease progression. Therefore, rising burden of chronic conditions is expected to boost the market in the forthcoming years.

In May 2017, Philips Volcano’s Verrata and Verrata Plus guidewires were positively appraised for add on reimbursement via title V of the List of Reimbursable Products and Services (LPPR) by National Commission for the Evaluation of Medical Devices and Health Technologies (CNEDiMTS), France. In June 2017, CNEDiMTS also evaluated Boston Scientific’s fractional flow reserve guidewire, Comet, based on technical equivalency, to include it in LPPR category. The presence of a favorable reimbursement framework coupled with various government initiatives aimed at increasing accessibility to treatment alternatives is driving the market in developed economies.

An increasing number of product launches is also one of the indicators that depict the growth in investment for new product development. For instance, Cook Medical announced the launch of two in one guidewire, Motion Hybrid Wire Guide, with combined features of Teflon fixed core wire and nitinol access wire in January 2017. In May 2016, St Jude Medical, Inc. (Abbott) also announced the CE mark approval and European launch of a fractional flow reserve measurement system, named PressureWire X Guidewire. Between 2014 to 2017, Covidien (Medtronic), ASAHI, and BIOTRONIK had also launched their products.

Unhealthy and changing lifestyle habits, such as consumption of salt, saturated fats and sugars, lack of physical activities, high tobacco and alcohol consumption has increased the risk of developing chronic conditions such as obesity, cardiovascular diseases, and metabolic disorders. Rising prevalence of lifestyle habits such as growing number of smokers and rising incidences of obesity & dietary irregularities are responsible for the growing incidences of cardiovascular, neurological and urology-based diseases.

According to WHO (2018), cardiovascular diseases cause approximately 17.7 million deaths every year. Rising prevalence of unhealthy lifestyle habits such as the growing number of global smokers, rising incidence of obesity, and dietary irregularities are responsible for the growth of cardiovascular disease prevalence in the world. Furthermore, the number of congenital heart disease patients is on a constant rise, which acts as a growth driver for the market.

Growing awareness about the catheter-associated infections and its impact on the life of the patients is expected to restrain the usage of catheters, thereby ultimately impacting the growth of the guidewires market. However, introduction of technology innovations aimed at reducing catheter-associated infections and FDA publications aimed at increasing awareness about the appropriate use of catheters is expected to change the market dynamics in the favor of guidewires market.

In 2018, coronary segment held the largest revenue share of 44.8% owing to high demand for minimally invasive coronary procedures. A significant number of hospital admissions of atherosclerosis patients and rising prevalence of cardiovascular disease also contribute to the segment growth. As per the document titled Heart Disease and Stroke Statistics 2018, nearly 92.1 million American adults were suffering from some form of cardiovascular disease, in 2017.

Introduction of new technologies is expected to assist the segment to continue its dominance over the forecast period. Presence of favorable reimbursement policies for cardiovascular surgeries is also positively impacting growth of the guidewires market. Galeo coronary guidewires (Biotronik) and Spectre guidewire (Teleflex) are among a few examples of coronary guidewires launched in the past four years.

Neurovascular segment is projected to witness the fastest CAGR of 10.2% over the forecast period, majorly owing to a high prevalence of neurovascular diseases such as dural arteriovenous fistula, aneurysms, arteriovenous malformations, cerebral hemorrhage, cavernoma, and stroke that affects the spinal cord and cerebral vascular system. Treatment of such disorders is challenging due to the presence of critical blood vessels. However, rising adoption of these devices in highly complex neuro-vascular minimally invasive surgeries is positively impacting the market growth.

In 2018, coated guidewire accounted for the majority of the revenue share owing to high demand. These products reduce friction, preserve tactile feel, and allow easy access to blood vessels. Hydrophilic and hydrophobic are the two types of coatings available in the market. Conventionally used uncoated products also exists in the market. However, the usage of uncoated guidewires is significantly declining owing to the advantages offered by coated guidewires.

Hydrophilic coating accounted the highest revenue share in 2018. This is due to a high preference for hydrophilic coated guidewires in the percutaneous transluminal coronary angioplasty (PTCA) or vascular procedures. The hydrophilic nature of the guidewires results in the chemical interaction with water to form a hydrogel material that exhibits low friction coefficients.

Manufacturers are also investing in the development of hydrophilic coated or a tip with hydrophilic coating. In February 2014, Covidien (Medtronic) announced the introduction of HydroFinity hydrophilic guidewire in its peripheral vascular product portfolio. Cook Medical, ASAHI INTECC CO., LTD., and BrosMed are few other companies that have recently launched products in this category.

Nitinol is another important segment in terms of revenue share as well as growth rate. Growing preference for nitinol owing to its advantages such as better flexibility and kink resistance as compared to other raw materials such as stainless steel is one of the key drivers. Ability of the nitinol based products to resist deformations in the tortuous anatomies is also one of the drivers for rising preference for nitinol. 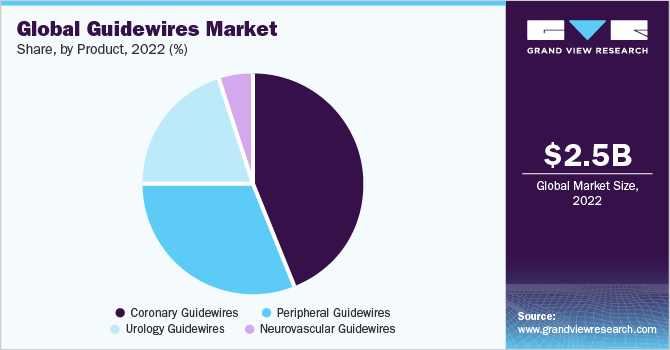 Other segment consisting of metals and alloys, other than stainless steel and nitinol such as platinum, or platinum-nitinol is expected to emerge with the fastest CAGR 6.7% over the forecast period. Technological advancements leading to the development of alloy based products exhibiting better material properties are anticipated to drive the growth. Examples of this product category includes Abbott’s HI-TORQUE CONNECT 0.018" PERIPHERAL GUIDE WIRE Family and Boston Scientific’s Platinum Plus Guidewire .014" & .018".

North America held the largest market share of USD 639.8 million in terms of revenue in 2018. This is majorly attributed to the high prevalence of cardiovascular diseases and rise in number of coronary and peripheral interventions. Moreover, growing preference for minimally invasive surgeries such as coronary bypass and cardiothoracic surgery is also one of the key factors driving the regional demand. Additionally, the presence of key players such as Terumo Medical Corporation, Boston Scientific Corporation, Abbott, Cardinal Health, AngioDynamics, and B. Braun Melsungen AG is also one of the indicators that depict its current huge market potential.

Growing prevalence of cardiovascular diseases and rising preference for minimally invasive surgeries in the U.S. are the key factors driving the growth of the market in the U.S. People in the country prefer noninvasive surgeries owing to the probability of high infection associated with invasive surgeries. In addition, noninvasive methods reduce hospital stay for patients, thereby saving time and cost. According to the data published by St. Jude Medical (Abbott) in 2016, nearly 900,000 PCI procedures were performed each year in the country.

French surgeons are known worldwide for their expertise in minimally invasive surgeries and hence, France has established training centers for these surgeries. Guidewires are used as safeguards during minimally invasive coronary surgeries. Favorable government policies and well-established healthcare infrastructure owing to the use of technologically advanced utilities for the treatment of target disorders are among the key factors driving market growth in this region. Major players operating in the European market are B. Braun Melsungen AG, Medtronic, Cook Medical, and Stryker.

Asia Pacific is expected to register a lucrative CAGR of 8.4% over the forecast period, owing to factors such as increasing geriatric population, prevalence of cardiovascular disease, and preference for advanced minimally invasive surgery technique that provide faster results and higher accuracy. Untapped opportunities in the emerging countries such as China and India are also driving the market.

Growing geriatric population in these countries coupled with rising prevalence of cardiovascular diseases is contributing to the market growth. For instance, according to Institute for Health Metrics and Evaluation (IHME), in 2017, stroke and ischemic heart disease were the leading causes of death in China. Some of the key players in this region are B. Braun Melsungen AG, Terumo Medical Corporation, and Abbott.

This report forecasts revenue and volume growth at global, regional, and country levels and provides an analysis of the latest industry trends in each of the sub-segments from 2014 to 2025. For the purpose of this study, Grand View Research, Inc. has segmented the global guidewires market report on the basis of product, coating, raw material, and region: