The global halal food & beverage market size was valued at USD 436.8 billion in 2016. Halal, in the present time, has turned out to be a universal conception that covers the entire concept of fresh, clean, and healthier production as well as services of food. This is completely contradictory to the traditional notion, which was restricted to only slaughtering of animals according to Islamic law or merely free from swine & alcohol. It is no more a mere religious obligation but has moved beyond that to become a standard of choice for both Muslims and non-Muslims. The shift in consumer perceptions regarding such products offers strong opportunities for substantially rapid growth of the global halal food market in the next eight years.

In spite of these changes in perceptions, the growing Muslim population is, however, the most vibrant factor fueling demand for these foods. The worldwide Muslim population has grown from around 1.57 billion in 2009 to over 2.10 billion in 2016 which is projected to grow even faster over the forecast period. According to the State of the “Global Islamic Economy”, the Muslim consumer spending across halal food & lifestyle in 2014 was reported to be worth USD 1.8 trillion which is anticipated to increase to USD 2.6 trillion by 2020. These figures show excellently potential growth for halal food products and even services categories of the industry.

With a large, diverse, and educated consumer base of approximately 1.7 million predominantly young Muslims globally, which is growing at nearly double the rate of the world population, the Islamic economy can be considered as one of the fastest-growing sects globally. The International Monetary and Financial Systems reported that at one instance where the global economy is entering a secular stagnation owing to a decline in investments and the aging population, the Islamic economy, on the other hand, stands in stark contrast offering vast opportunities for the economic growth. These factors are anticipated to be crucial factors backing the halal foods industry growth.

However, there are a few constraints expected to hinder industry growth. A persistent confusing environment for establishing international halal standards, mainly because they are framed by various types of organizations is a major restraint. These would include government-owned and linked enterprises, independent Halal certification bodies (HCBs), private organizations, National Standard Agencies, regional bodies such as GCC Standardization Organization (GSO), The Association of Southeast Asian Nations (ASEAN), European Commission and international establishments including The Organization of Islamic Cooperation (OIC) and The Standards and Metrology Institute for the Islamic Countries(SMIIC) initiatives.

The primary concern for the manufacturers is to determine the specific standard that is likely to offer them the best possible access to a target market. Also, these companies have to constantly update various certifications to optimize the trade process in several instances where these become mandatory for exports. Nevertheless, leading organizations for halal standardization and accreditation have been taking steps to harmonize the standards.

Despite these uncertainties in the regulatory agenda prevailing in the present industry scenario, this sector remains vibrant and is expected to be an interesting area for innovation. Manufacturers have been trying to drive change in the entire value chain of this market from raw material, product development to finished product packaging, marketing, and spreading the benefits of consuming these products along with the social media advertisements.

Food safety and traceability have become a major concern in the entire industry. It is highly expected that every stakeholder must be fully accountable and responsible for procuring, handling, manufacturing, and quality control of halal foods. This may be attributed to the fact that a food-related illness, because of a minute mishap anywhere in the value chain, might destroy a company’s reputation, even if it is not specifically at fault. Hence, the safety & control regulations and policies require inputs and collaborations of every stakeholder in the value chain.

The halal food and beverage market is expected to continue to build its momentum across the global supply chain. The most prominent testimony to this fast-growing nourishment segment is that it remains almost constant in terms of its traditional ideas in spite of minimal differences across different cultures and geography. Hence, this sector is expected to become a major source of growth in both Islamic and even non-Islamic economies.

Meat & alternatives are expected to be the largest product segment by 2025. With the growing world Muslim population, the demand for meat and meat products will also increase. The rapidly increasing Muslim population, their economic development, and the growing disposable income of an average consumer are the main factors expected to drive the market over the forecast period. According to The Organization of Islamic Cooperation (OIC), meat products have been considered as the most preferred diet of Muslims.

Around 75% of Muslim population in the U.S. and over 84% in France consume halal meat daily apart from the other dietary products. The Islamic population in addition to the religious value is fascinated by several central doctrines such as to protect the forthcoming generation, to preserve life, to maintain integrity and self-respect. Moreover, respect for the welfare of animals, health consciousness, and a degree of acculturation are also some of the vital influencers in the growth of the halal meat & meat products market. 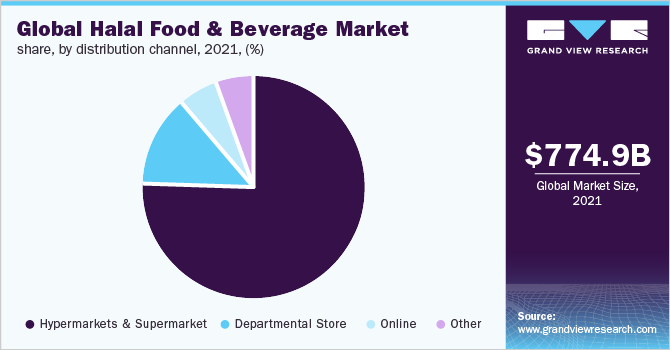 The fact that the foodservice operators are able to meet the ever-increasing demand is yet another factor maintaining the supply-demand scenario globally. Supporting religious obligations and preserving halal identity for not only in meat & meat products but also gradually extending capacities to cover services that are involved in the logistics of halal meat and meat products. This is because the halal meat concept is no longer confined to food items only; it also includes the notion of storage, handling, packaging, transportation & delivery processes.

Religious swing to Islam and migration from Muslim dominated nations in other regions are the other two vital dynamics responsible for the significantly rising Muslim population in the Asia Pacific. With the increase in the number of Muslims, the demand for these types of food has also increased tremendously, and this trend is projected to continue over the forecast period, hence driving the Asia Pacific market. Middle East and Africa, home to over 327 million Muslims and is another growing halal food consumer region and providing potential opportunities for importers. The increasing population and rising consumer cognizance towards Islamic lifestyle and food especially in the Middle East is a major factor driving the industry growth.

The UAE recently launched “Halal National Mark” as there was an absence of single or proper certification in the region, and henceforth the manufacturers in the region have been adhering to these standards. Over 20% of the global Muslim population was based in the Middle East as of December 2014 and Iran has the highest population among all the Arab countries. Egypt and Nigeria are the two African countries with the highest Muslim population. Moreover, the growing popularity of halal food among the non-Muslims in the other regions owing to rising awareness for food security, freshness, healthiness, and nutrition has another vital role to play in driving the industry growth.

This report forecasts revenue growth at global, regional & country levels and provides an analysis of the industry trends in each of the sub-segments from 2014 to 2025. For the purpose of this study, Grand View Research has segmented the global Halal Food and Beverage Market report on the basis of product and region: