The global Head-Up Display market size was valued at USD 1.91 billion in 2016 and is expected to witness a significant increase in the market over the forecast period. Number of shipments of Head-Up Display (HUD) in 2016 was estimated to 3.75 Million units and is expected to witness a significant increase in terms of volume over the forecast period. The growth of the HUD market is primarily driven due to the low cost of product and easy integration with smartphones, which enhances the safety of drivers by reducing distractions. Innovative solution offerings such as global positioning system and augmented reality that can be integrated with the head-up display system further drives the demand for industry.

HUD is a transparent display that presents information in the driver’s line of sight without the need to look away from the road. HUDs were initially developed for aviation and military applications; however, they are increasingly being used in automobiles, commercial aircraft, and other wearables.

The increase in purchasing power of individuals due to growth in disposable income is expected to feul the industry growth. The modern-age population is becoming more tech savvy and acceptable toward technologically advanced products that promote safer driving practices. Furthermore, increasing awareness regarding safety is a major factor driving the further growth.

A typical head-up display consists of a projector unit, a display system, programmed computer, and connecting chords. It is available in diverse types such as fixed mounted HUD, helmet mounted HUD, and so on and offers an advanced way of viewing navigation directions. The system can also be coupled with an adaptive cruise control, which was a recent innovation in car transport systems, to offer the best safety systems.

The improved standard of living of the global population has resulted in increased affordability for premium cars, which in turn has boosted the usage of head-up display for navigation purposes. Though several automobile manufacturers are currently offering head-up display systems as an additional feature in their cars, it may eventually become necessary for every car manufacturer to implement them for improved safety and enhanced user experience.

Based on applications, the global market has been segmented into automotive, aviation, wearables, and others. The automotive application segment is expected to account for a significant market share over the forecast period. The aviation segment follows next owing to majority of commercial aircraft implementing head-up display systems for optimum landing and takeoff. The increasing number of flight simulators also significantly drives the growth of this market. Moreover, the designing of transparent display proves to be a major challenge for vendors as the displays are required to provide enhanced visibility in sunlight in the same way that they would at night.

The automotive segment has further been sub-segmented into premium/luxury cars, sports cars, and basic & mid-segment cars. The premium/luxury cars sub-segment is expected to account for a significant market share in the automotive segment over the forecast period. The integration of head-up displays with driver assistance systems, which are increasingly adopted by several automobile manufacturers, is expected to drive the market growth of these displays. 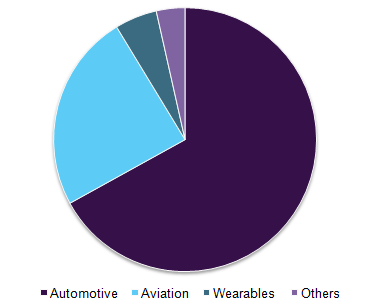 The wearable application segment is expected to account for a nominal market share over the forecast period as vendors are investing heavily in R&D to offer an enhanced driving experience. Increasing demand for advanced technological products, which offer enhanced accuracy, is the major driving factor for the growth of head-up display market in the wearable application.

The presence of large technology companies and huge investments made in the R&D of head-up displays are the major factors driving the growth of the market in the North American region. Currently, North America occupies a significant market share in the overall global market, which is followed by Europe due to the increasing awareness among individuals about the benefits offered by head-up displays.

Recent innovations in technologies with respect to the automotive industry, such as adaptive cruise control and augmented reality, are the major trends that would lead to a significant rise in the demand for the overall U.S. market. Additionally, the region being one of the largest auto markets in the world is also expected to significantly boost the market revenue.

The Asia Pacific regional market is anticipated to account for a comparatively higher CAGR, owing to the increasing awareness among users regarding the benefits offered by the technology. Growth in the standard of living and increasing disposable income are the driving factors for the growth of the market in this region.

This report forecasts revenue growth at global, regional, and country levels and provides an analysis of the latest trends and opportunities in each of the sub-segments from 2014 to 2025. For this study, Grand View Research has segmented the head-up display market based on application, and regions. The automotive application segment is further sub-segmented based on the end user.

How big is the head-up display market?

What is the head-up display market growth?

Which segment accounted for the largest head-up display market share?

b. North America dominated the head-up display market with a share of 31.1% in 2019. This is attributable to the growing number of startups in the technology & software industry and increasing adoption of the ADAS by economy car manufacturers in the region.

Who are the key players in head-up display market?

What are the factors driving the head-up display market?

b. Key factors that are driving the market growth include an increase in the disposable income of the tech-savvy population, growing demand for electric & luxury vehicles, and increasing use of HUDs along with augmented reality & gamification.