The Augmented Reality (AR) market size was USD 640.2 million in 2015. The increasing scope of applications across different industries, such as medical, retail, and automotive is expected to drive demand over the forecast period. AR technology is in the nascent stage with a huge growth potential and has attracted large investments contributing to the industry growth. 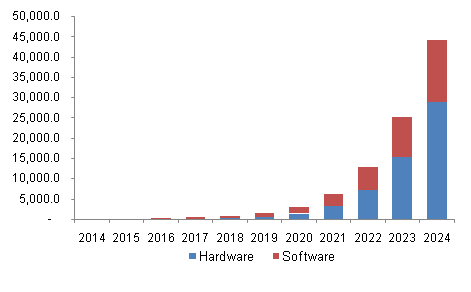 According to the TechCrunch, “Over USD 1.1 billion has been invested in the last two months in this space. Investors are raising funds for the increasing number of startups. For example, Magic Leap has received an investment of USD 590 million since 2014 for its head-worn device.

Another technological advancement is the smart contact lens, which can automatically remove unsafe optical radiation. The smart contact lens consists of a small display that can project images into the wearer’s eye, an antenna, a camera, and motion sensors. Recently, in 2016, Samsung has filed a patent for these lenses, which is fitted with a camera and image display in South Korea. Google is also developing glucose-sensing contact lenses that could help in detecting diabetes by continuously monitoring the glucose level.

AR offers a large number of technology solutions to the retail industry, which improves interaction between retailers and customers. Emerging trends such as pop-up stores in the retail segment are anticipated to fuel growth. Gesture-based technology is an important part of pop-up stores, along with a camera and iPad catalog, as they aim at encouraging customer participation. Furthermore, retailers willing to enter the online shopping industry find the lack of interaction with physical products as a barrier to making purchases. AR enables virtual trial rooms, which allow customers to try on products online. For example, De Beers has a tool that allows consumers to virtually try on jewelry. Thus, technological innovations related to high-end products with enhanced features are expected to offer abundant opportunities over the forecast period.

The AR software segment dominated the market with a revenue share of over 95% in 2014. However, the hardware segment is expected to witness a substantial growth at a CAGR of nearly 90% by 2024. AR systems have three basic hardware components, sensors, processors, and displays. Innovations in hardware, such as the development of smart contact lens and advanced HMDs equipped with AR processors, are expected to induce substantial growth prospects for hardware equipment over the future.

The smart glass segment is expected to witness significant growth on account of the increasing demand in the industrial and enterprise sectors. Advancements in smart glasses with more miniaturization, improved battery life, and better field of view may increase the segment demand.

Head-mounted displays (HMDs) are expected to dominate the market accounting for over 65% of the overall revenue by 2024. Several companies in the industry are working on developing HMDs for AR with advanced features. For instance, the modern HMDs are capable of employing sensors of six degrees of freedom that allow free head movement.

Furthermore, the rising R&D activities in this segment are expected to gain momentum. For instance, the Korean Advanced Institute of Science and Technology (KAIST) has developed a high-performance HMD, which has an inbuilt augmented reality processor that would propel the demand.

The automotive application segment is expected to grow at a CAGR of nearly 75% from 2016 to 2024, owing to the increasing adoption of AR across the automotive industry. Several automotive companies have started employing AR into their advertising campaigns. For example, in 2008, MINI developed a print advert that uses a webcam and a desktop computer. It provides the viewers with a 3D walk-around of its new car by augmenting the print advert. Moreover, the automotive industry players are developing apps to enhance the driving experience, which is expected to be a high impact rendering driver.

The industrial sector contributed around 20% of the revenue share in 2015, which is expected to witness a decent growth at a CAGR of nearly 70% for 2016 to 2024. Increasing scope of applications in complex machinery, maintenance, and assembly, is expected to augment expansion, which will result in achieving tangible profits.

The Asia-Pacific augmented reality industry accounted for over 19% in 2015, growing at a CAGR of over 80% from 2016 to 2024. China is expected to drive the regional growth with the increasing investments in AR devices and software. The mobile AR market in China is driven by the proliferation of the smartphone industry. Local vendors such as Renren, Tencent, and Baidu have invested in the technology and are expected to launch numerous mass-consumer apps, which is projected to determine a high level of penetration among the customers.

Europe is estimated to grow at a CAGR of nearly 75% over the forecast period led by the increasing investments from countries such as Germany and the UK. Furthermore, the increasing adoption of AR across the automotive and retail industry is expected to drive the growth.

The AR is a lucrative industry with a very high potential offering many platforms, applications that are still unexplored. In order to be ahead of the curve, the companies in this industry invest in deploying the R&D team that is dedicated to both business and technical innovations.

How big is the augmented reality market?

What is the augmented reality market growth?

Which segment accounted for the largest augmented reality market share?

b. The head-mounted display (HMD) dominated the augmented reality (AT) market with a share of 68.3% in 2019. This is attributable to the rise in R&D expenditure for developing HMDs with advanced AR features.

Who are the key companies/players in augmented reality market?