The global heavy duty road filtration aftermarket size was estimated at USD 2.19 billion in 2015 and is expected to grow at a CAGR of 6.8 % from 2016 to 2024. Growing environmental concerns and new government regulations across many countries such as U.S. and Germany are expected to benefit the aftermarket for road filtration products over the projected period.

Countries across the globe have focused their attention on curbing air pollution. Air pollution has adverse effects on environment such as global warming and ozone depletion. Furthermore, air pollution also has acute and chronic effects on human health and may lead to diseases like cancer, nausea, headache, and loss of coordination. As a result, the market is expected to gain momentum over the projected period. 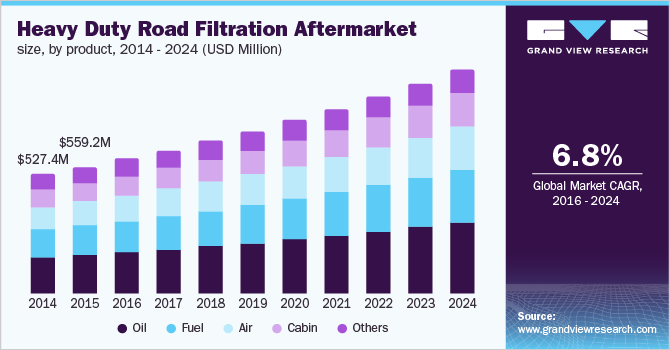 In the U.S., oil segment accounted for the largest revenue share of 31.1% in 2015 and is expected to continue its dominance over the forecast period. Oil filters are majorly used in heavy-duty vehicles such as construction machinery, agricultural equipment, and others. The latest technologies and innovation in the country makes it a mature market in comparison to others.

Aftermarket filters provide various advantages over the conventional ones. However, their high cost may be a restraining factor for the market over the forecast period. OEM manufactured filters are produced in bulk, providing economies of scale benefits to the manufacturers. Also, to suit varying applications, high-quality materials are used for manufacturing.

Major industry participants are focusing more on product differentiation. Fram Filters have developed filters possessing the time-release technology (TRT). This technology prolongs the degradation of oil to prolong oil replacement duration. Such innovations are further expected to drive the market.

Fuel filters emerged as a dominant segment in 2015 and accounted for 31.2% of the revenue share owing to their properties such as protection of high-value vehicles and low maintenance cost. The fuel filter collects debris, contaminants, and moisture that could otherwise get into the engine and may damage the cylinder, pistons, and other engine components.

Oil filters were the majorly used products, and accounted for 25.7% of the total revenue share in 2015. Filtration products used in the heavy-duty aftermarket is expected to witness significant growth owing to the increase in automobiles around the globe. Furthermore, increasing awareness and industrialization towards the environment plays a major role in the market growth.

Air filters accounted for 22.2% of the total revenue share in 2015. This increase in the demand of heavy-duty air filters is owing to its major use in construction machinery. Increase in the growth of construction and infrastructure sector around the globe, is anticipated to drive the demand of heavy-duty filtration products over the projected period.

Global aftermarket for heavy-duty (HD) road cabin filtration products is rising at a significant pace. Rising environmental concern is resulting in demand for cabin filtration across the globe. In 2015, HD cabin filters segment accounted for 13.4% of the total revenue share and is expected to lead market in the upcoming years.

Trucks and buses segment accounted for 33.3% of the revenue share in 2015. This application segment is expected to lose some share in the forecast period owing to the rising fuel cost and environmental issues. These concerns are pushing the government to invest in alternative fuels and technologies that are more efficient.

Trucks & buses represent only a small portion of the total vehicles population. Yet, they account a significant percentage of the total fuel and energy consumed in the road transportation sector. The demand for heavy-duty filtration products for trucks & buses are expected to grow over the forecast period. 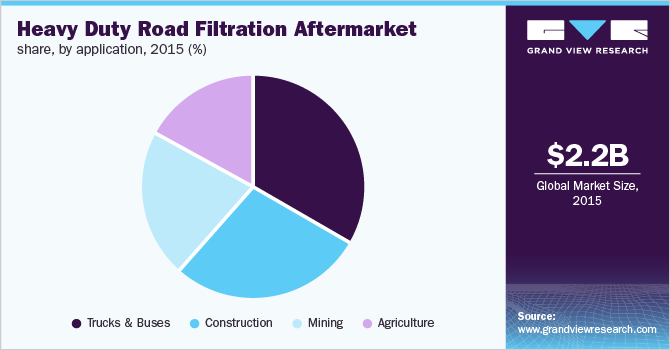 Construction segment was the second largest application in 2015 and accounted for 28.1% of the revenue share owing to rising construction industries in countries like India and China. Construction market in Western Europe is expected to show a slow down with a change in the economic condition around different countries in the region.

Agriculture segment is expected to grow at lucrative pace owing to challenges such as the sector has to produce more food to feed for a growing population with a smaller rural labour force. Consistent change in weather pattern is causing disturbance in the industry. Government authorities are trying to use new and advance machineries to improve the output in the sector.

In 2015, Asia Pacific industry accounted for 24.4% of the revenue share and is expected to witness the fastest growth over the projected period. Rapid growth of application industries across China, Japan, South Korea and India is expected to promote the demand for heavy duty road filtration aftermarket over the forecast period.

China is the largest consumers for aftermarket heavy-duty road filtration products in this region. Improving automotive sector in China, and India on account of low manufacturing cost coupled with favorable government regulations is also likely to promote investments in the Asia Pacific region.

Despite of the global slowdown in the mining sector, Central & South America continues to grow as a major target for mining investment, development, and exploration. Countries in the region are the major exporter of iron ore, copper and gold. As a result, the region is expected to gain significant market share over the forecast period.

It is fragmented industry with many international as well as regional players. The presence of a large number of manufacturers and distributors has flooded the industry resulting in a high competition. Major industry participants include Mann & Hummel, Cummins Filtrations, UTI Filters, SOGEFI Group, Parker Hannifin Corporation, Donaldson and many others.