The global hemophilia market was valued at USD 11.1 billion in 2018 and is expected to grow at a CAGR of 5.2% over the forecast period. The Presence of limited therapies and rising burden over the regulatory authorities toward treatment of these disorders is expected to drive R&D focused on identifying curative agents. This, in turn, is expected to boost growth during the forecast period. Furthermore, increasing campaigns and supportive government initiatives plan to undertake early screening of neonates, which is expected to propel the requirement of diagnostic aids.

According to the World Federation of Hemophilia (WFH), the disease is more prevalent in males and about 1 in 5,000 neonates suffer from type A. Hemophilia is a rare genetic bleeding disorder estimated to have affected about 440,000 people globally as of 2018. The federation also mentions that about 75.0% of these individuals are either undiagnosed or receive inappropriate treatment. 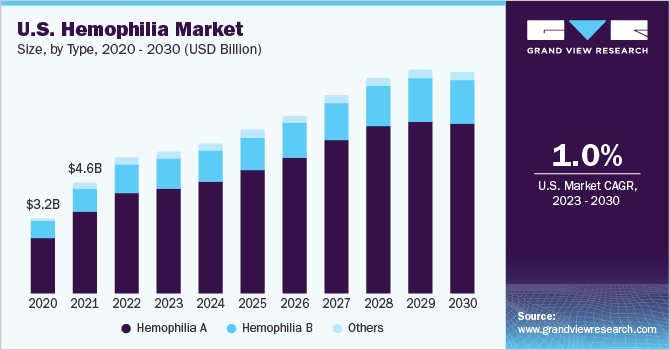 With the genetic evolution, increasing incidences of bleeding disorders and rising severity have been observed, leading to industry growth over the forecast period. For instance, according to the National Hemophilia Foundation (NHF), as of 2015, about 1.0% of the U.S. population is anticipated to suffer from von Willebrand disease, thereby increasing the need for treatment drugs.

To facilitate continuous treatment for patients, agencies such as the Hemophilia Association of America have pursued industry players to introduce various co-pay assistance initiatives. This is expected to neutralize the expenses for individuals and further assist in providing access to new products. For instance, CSL Behring donated 1.5 million units of their antihemophilic agents on the occasion of World Hemophilia Day (April 17). The company also started “MyAccess Cost-Share Program” for the U.S. patients, wherein they provide treatment cost up to USD 12,000.

Based on type, the hemophilia market has been classified into type A, B, C, and others. This segmentation has been done on the basis of the coagulation factor deficiency in a particular patient. Type A is the most commonly occurring type and has been observed to be four times more prevalent than type B.

Furthermore, the pharmaceutical industry is flooded with drugs to be used in the treatment of type A, thereby limiting its growth over the forecast period. Advate and Recombinate are the popular drugs manufactured by Baxalta, which are used for prophylactic treatment of type A patients across the U.S., the UK, Germany, Japan, China, and South Africa.

However, over the forecast period, the sector is anticipated to witness the fastest growth for type B-based medication, as indicated by the increasing number of people being diagnosed with type B and by the increasing efforts to tackle it.

Key therapies analyzed in the hemophilia market include replacement therapy, Immune Tolerance Induction therapy, and gene therapy. Gene therapy is an evolving field focused on identifying the defective DNA bases and reinstating with functional ones. Hence, this segment is expected to present industry players with the most lucrative opportunities over the forecast period.

Furthermore, the NHF stated in their annual statistics that about 60.0% cases of type A fall into the severe category within the U.S., driving the demand for a more permanent solution rather than replacement through chemically synthesized factors. 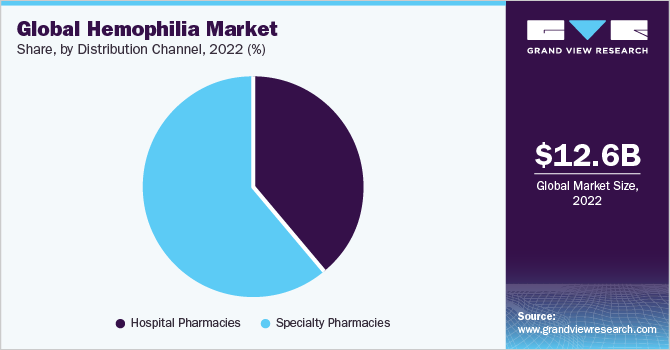 BioMarin Pharmaceutical Inc. announced the first clinical results for their gene therapy molecule BMRN-270 indicated to be used for curing type A in April 2016. According to the study, six patients from a total of eight illustrated production of the deficient factor VIII.

North America dominates the hemophilia market and is expected to contribute over 45.0% of the revenue share. High prevalence coupled with rising inclination toward prophylaxis treatment is predicted to be the preliminary drivers of this growth. According to the annual global survey, 2015 of WFH, it is estimated that about 63.0% of the patients in the U.S. have opted for prophylaxis treatment, thereby propelling the growth.

However, over the forecast period, Asia-Pacific is anticipated to witness the fastest growth. Rising identification of cases in countries such as India, Indonesia, Japan, and Malaysia coupled with increasing per capita use of therapies for factor VIII (type A) and IX (type B) deficiency are the vital impact rendering drivers.

Key players in this industry include Baxalta, CSL Behring, Pfizer, Inc., Bayer Healthcare, BioMarin Pharmaceutical, Inc., Biogen, Chugai Pharmaceutical Co., Novo Nordisk, Shire Plc., and others. Shire Plc. is currently the most progressive company, owing to its acquisition of Baxalta in June 2016. Baxalta earns over 40.0% of their annual revenue through the sale of their drugs such as Recombinate, Advate, Hemofil, Rixubis, and Obizur.

Exploring new geographic regions and rising R&D expenditure toward the development of longer acting alternatives are the common trends observed. In March 2016, Baxalta filed an application for marketing authorization of Adynovi (Adynovate in the U.S.) with the EMA, which is currently under regulatory evaluation in Switzerland.

This report forecasts revenue on segment level and provides an analysis of the industry trends in each of the sub-segments from 2015 to 2026. For the purpose of this study, Grand View Research has segmented the Hemophilia market report on the basis of type, treatment, and therapy.