The global gene therapy market size was valued at USD 536.43 million in 2018 and is expected to register a CAGR of 33.9% assuming the projected successful commercialization of some of the key therapeutics, that are planned over the forecast period. Many other therapies are also under development, which when approved and marketed, may contribute to significant revenue generation and would boost the industry growth. For instance, in 2018, there were 950 molecules in the development that were expected to be as effective treatment options for different indications like cancer, cardiac diseases, inherited blindness, and various other gene related defects.

Gene therapy involves modification of the faulty and missing gene/s and then delivery to the intended target using modified viral particles or other biotechnologically approved methods. This therapy is mostly considered as a one-time treatment; however, in some cases, it requires more than one dose of medication to completely cure the disease. Gene therapy, once considered impossible on a commercial-scale has now become a trend and most of the companies are banking on breakthrough innovations in the field. Many of the smaller companies have been successful in bringing few molecules to the market with the backing of larger companies. 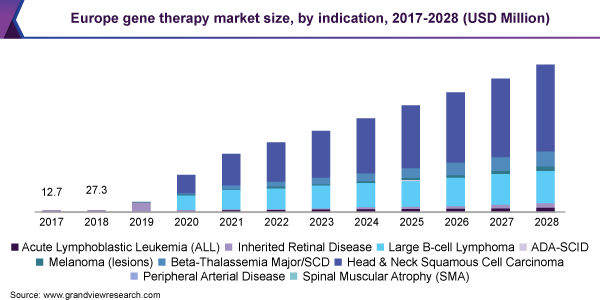 For instance, major companies like Bristol Myers Squibb are acquiring or funding small-scale companies to support the innovation in exchange for royalties. The global industry is currently in a very important phase of development, with some companies launching a few gene therapy products for commercial usage and with some novel molecules up for commercialization by 2020. Companies are betting big on the revenue returns considering significant investments made in the R&D of the molecules. However, the lack of standard regulations for usage and development, high prices of the marketed products, consumer acceptance, and market presence in other countries or regions are hindering the gene therapy market growth.

As an example of expensive treatment, Kymriah, a gene therapy molecule by Novartis AG launched to treat Acute Lymphoblastic Leukemia (ALL) costs around USD 675,000 per dose and was available only in U.S. at the time of launch. This has resulted in revenues much lesser than expected and predicted by the company and other industry experts from medicine and finance. Such bottlenecks can be overcome with joint efforts from government bodies, manufacturers, and payers, in terms of pricing, regulations, reimbursement for treatment costs, and their efficiency in handling the ethical concerns that would arise with gene therapy, especially in the regions of Asia and Middle East.

Recent times have seen a few molecules approved for clinical usage and out of the 7 molecules approved around the world, 4 are indicated for the treatment of various cancers. Majority of the manufacturers are focused on developing the therapy for various cancers. For instance, more than 60% of the gene therapy pipeline is being tested for oncological treatments. High prevalence of cancers around the globe along with the limited and painful existing treatment regimen is further driving the market.

However, manufacturers are making considerable efforts in innovating molecules for rare diseases and CVDs treatment. It is estimated that by 2030, more than 15 approved molecules for various indications are to change treatment approach for cancers and inherited diseases owing to the modifications that might take place in terms of market penetration, coverage by payers and government bodies.

Modified gene might be the most important component of a gene therapy molecule, however, the efficacy, for the molecule to act on the intended site without triggering fatal adverse effects, largely depends on the delivery of the gene. Need to deliver the modified molecule precisely to the intended target to achieve desired results without triggering immune system leaves no margin of error in gene delivery. This led the scientists to research on various delivery agents like attenuated viral particles and other non-conventional non-viral delivery methods. 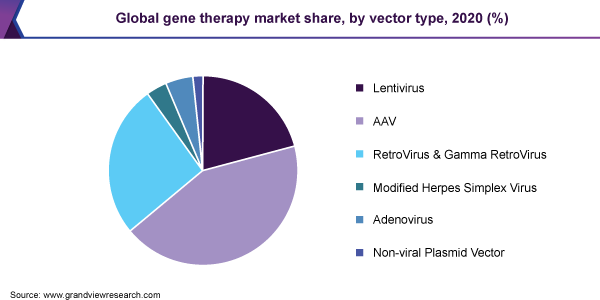 Many viruses, such as Lentivirus, Adeno-Associated Virus (AAV), RetroVirus & Gamma RetroVirus, Modified Herpes, Simplex Virus, Adenovirus, Vaccinia virus, Baculovirus (Bacmid) are being modified and being researched upon to identify ideal vectors to deliver gene therapy drugs. However, each type of viruses poses their own limitations that include triggering a potential immune response, limited DNA-carrying capacity, and so on.

These consequences led the researchers to look beyond viruses to deliver the molecules and some of them include non-viral methods like the injection of naked DNA, Lipofection, which can eliminate the potential adverse effects that might be caused due to viral vectors. However, there is considerable research to be done to commercialize any of these non-viral methods.

North America is the dominant regional market, in terms of revenue generation, number of molecules approved for clinical usage, and R&D, which consists around 70% of the global gene therapy pipeline. Many of the companies in U.S. are seeking approvals for next phase of clinical trials and molecules that are ready for commercial usage. In 2018 alone, FDA has approved 3 molecules to treat cancer and inherited blindness and by 2020, it is expected that at least 6 molecules would be on a full commercial scale. Europe follows U.S. with 3 molecules approved for clinical usage; however, one molecule for the treatment of cancer is limited to Russia and Ukraine. In the emerging economies, China leads the market by a significant margin by having two approved drugs that can be used for cancer treatment and with significant pipeline volume.

This report forecasts revenue and volume growth at global, regional, and country levels and provides an analysis of the latest industry trends in each of the sub-segments from 2014 to 2026. For the purpose of this study, Grand View Research has segmented the global gene therapy market report on the basis of indication, vector, and region: