The homeland security market size was USD 279.64 billion in 2015. The increase in demand for safety equipment and solutions across several industries such as aviation, maritime, cyber, and border security is anticipated to drive market growth over the forecast period. The industry is highly competitive, and manufacturers invest heavily in R&D operations to offer innovative products. For example, Harris Corporation invests its R&D funds in providing new mission-critical communications at a faster pace and lowering cost. 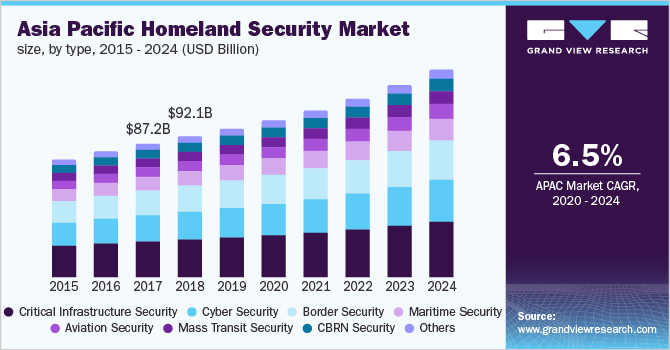 Several government initiatives were undertaken to restrict increasing cross-border insurgency and terrorist threats are expected to drive demand. Also, growing human trafficking, drug smuggling, and illegal immigration are persuading the government of various countries to invest profoundly in the procurement of homeland security solutions. Cybersecurity is anticipated to be the fastest-growing market segment. This growth can be attributed to regions such as North America, and Europe that is investing immensely in cyber defenses, hence, driving the homeland security market.

Advanced technologies such as cloud, social, and next-generation mobile computing in the business environment are fundamentally altering the way organizations exploit information technology for sharing information and conducting online commerce. Presently, more than 80 percent of total commercial transactions are made online, which seeks high quality of safety for transparent transactions.

Unmanned systems are being used extensively in national safety missions across the world. For instance, as of October 2014, the U.S. Army and U.S. Air Force (USAF), unmanned aerial systems (UAS) had flown over three million flight hours. Recently, the U.S. Navy has increased its experimentation in an assortment of unmanned maritime systems (UMS). Unmanned systems are becoming more affordable, proficient, and easier to operate which is expected to drive the industry growth further.

Cyber security has accounted for over 20% of the overall revenue share, which is expected to grow at a CAGR of over 5.5% from 2016 to 2024. The significant cyber protection risks occur from the widespread and increasing dependence on information and communication technology infrastructure and e-services, which has led the key focus on ensuring safety by combating cybercrime more efficiently and advancing national defense capabilities.

Aviation segment is expected to witness significant growth at a CAGR of nearly 5% owing to the advances in technologies such as biometric identification, handheld screening, and RFID technology.

CBRN segment is estimated to grow at a CAGR of nearly 4.5% over the forecast period. Technological innovations, such as nanotechnology, networked video cameras, and software design, to identify critical intelligence information have become powerful tools for counter-terrorism operations, increasing the effectiveness of anti-terrorism countermeasures. However, diffusion of advanced technological capabilities could facilitate terrorist access to CBRN materials, as well as guided missiles which could harm the homeland safety.

The Asia-Pacific homeland security market is expected to grow at a CAGR of over 6.0% from 2016 to 2024. Emerging economies such as China and India are expected to drive regional growth over the future. In India, safety concerns about domestic law and terrorist attacks have prompted the state and central government to focus on the modernization of the country’s security and defense infrastructure. This has led to the increase in budgetary allocation for homeland security expenditure and other initiatives such as National Security Agency, providing a Unique Identification (UID) number to all citizens of the country and establishment of the Crime and Criminal Tracking Network and Systems (CCTNS). North America dominated the industry with over 25% of the revenue share in 2015 and is expected to grow at a CAGR of nearly 3.5% from 2016 to 2024. The number of cyber-attacks has increased exponentially in the U.S. that has led to an increased focus on cyber safety across the region.

How big is the homeland security market?

What is the homeland security market growth?

Which segment accounted for the largest homeland security market share?

Who are the key players in homeland security market?

What are the factors driving the homeland security market?

b. Key factors that are driving the market growth include an increase in demand for safety equipment and solutions across several industries such as aviation, maritime, cyber, and border security.