The global hopped malt extract market size was estimated at USD 6.79 billion in 2018 and is expected to expand at a CAGR of 8.1% from 2019 to 2025. Increasing product application in the brewing industry, especially for manufacturing craft beer is anticipated to drive the market. Growing consumer awareness regarding the availability of a broad range of flavors and styles of craft beers with a low percentage of Alcohol by Volume (ABV), is expected to further fuel the product demand.

Hop is one of the major ingredients used in the beer brewing process along with other products, such as grains, yeast, and water. Hops provide bitterness, balance the sweetness of malt sugars, and add a refreshing finish to the brew. The ability of hopped malt extract to add the required aroma and bitterness to the finished beverages is anticipated to drive the demand. Rising adoption in baking, breakfast cereals, confectionery, and other food applications is anticipated to fuel the market growth. Moreover, rising application in non-alcoholic beverages is expected to contribute to the demand. 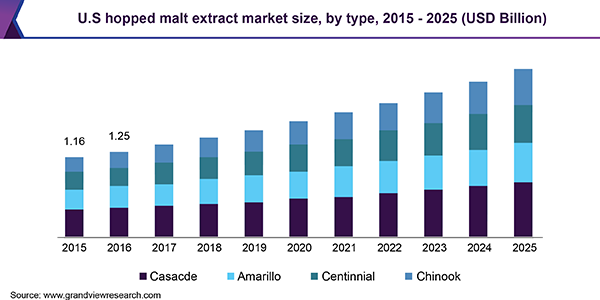 Small breweries heavily rely on hopped malt extract to produce their beers infused with new crafts and innovations to attract more consumers. Rising demand for craft beers is expected to drive the incorporation of new breweries, creating growth prospects for the market. For instance, beers such as stouts and India pale ales heavily use the hopped malt extracts.

Lack of raw material supply is anticipated to act as a driver as well as a restraint for the global market. Rising production of various malts including oat, barley, and wheat are projected to create business opportunities in the near future. Efforts to introduce less perishable malt varieties are projected to provide significant traction.

Cascade hops held the largest market share of about 34.36% in 2018, due to a wide range of application of the product in the brewing industry. This hop is often used in American pale ales owing to its superior aroma style profile and acidity. Many super acidic, dry-hopped brews are hopped with this variety. This factor is projected to bode well for the growth of the segment.

Centennial and Chinook segments are expected to register a CAGR of 8.3% and 8.9% respectively. Rising need for blends of various hop styles with strong aroma and flavor is anticipated to fuel demand for centennials. Chinook hops are used in both mainstream and craft brewers. Mainstream brewers, such as Coors focus on using Chinook as a bittering hop. The common types of beers brewed using Chinook hops include American barley wine, American lagers, winter ale, and American amber ale among others.

Beverage held the largest market share of more than 70% in 2018. Beverages, particularly alcoholic drinks majorly contribute to the high demand from this application segment. According to a report by the trade organization The Brewers of Europe, the number of microbreweries in Europe reached over 9500 in 2017. This factor is anticipated to fuel the growth of the overall hopped malt extract market during the forecast period. 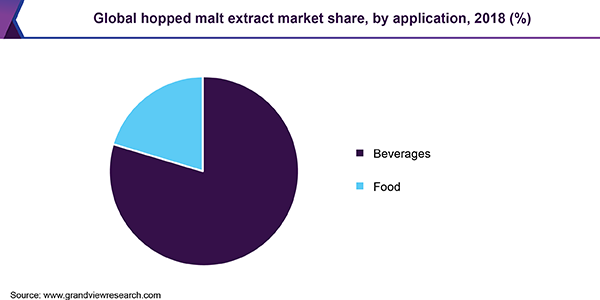 European and North American markets, particularly countries, such as U.K., Germany, and the U.S. are projected to drive the segment growth. Moreover, the governments from countries such as Australia, New Zealand, China, India, Belgium, and Mexico, among others support the incorporation of new breweries to promote employment generation. This factor is expected to drive the beverage application segment in the near future.

Europe held a market share of around 34% in 2018, mainly driven by the significant rise in demand for craft beer from U.K., Germany, Italy, France, and other countries. Beer drinkers from the countries, such as in Poland, France, Italy, Germany, and U.K. are interested in trying out different types of craft beer, such as Indian Pale Ales or other pale ales, and are also willing to shell out more money on them. This factor is expected to drive the regional market growth in the forthcoming years.

Asia Pacific is expected to register the fastest CAGR of 8.8% from 2019 to 2025, majorly attributed to rising demand for low alcohol volume drinks and flavored from China and India. According to Kirin Beer University’s December 2017 report on world beer consumption, China was recorded as the major country not only in terms of market share and consumption but also as one of the top 13 beer consumers in the world. This scenario is anticipated to drive the regional demand for hopped malt extract.

This report forecasts revenue growth at global, regional, and country levels and provides an analysis of the latest industry trends in each of the sub-segments from 2015 to 2025. For the purpose of this study, Grand View Research has segmented the global hopped malt extract market report on the basis of type, application, and region: