The global breakfast cereal market size was valued at USD 36.5 billion in 2021 and is expected to grow at a compound annual growth rate (CAGR) of 3.7% from 2022 to 2030. Breakfast cereal consumption across the globe has been increasing steadily due to the rising popularity of ready-to-eat food enabled by the fast-paced lifestyles of the working population. The demand has also been increasing due to the growth of the retail infrastructures across the emerging economies. With COVID-19 lockdowns prompting an increase in at-home breakfast eating and a resurgence of cereals for breakfast, consumer demand witnessed a surge. For consumers’, taste remained the top priority when it comes to breakfast cereals, however, with the pandemic consumers started placing a greater emphasis on health. 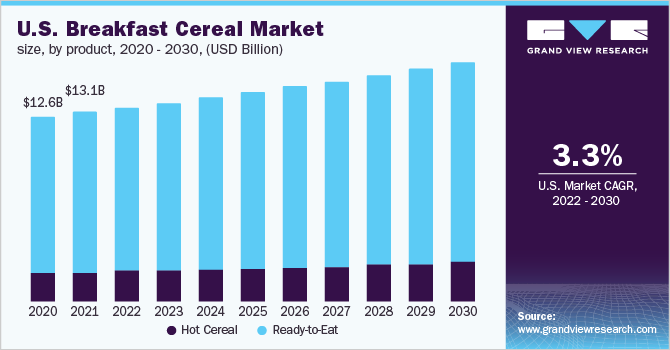 People have started returning to cereal as a result of the outbreak, as they have been confined to their homes. It is expected that the habits developed during the pandemic will persist, with a renewed emphasis on eating properly at home and be instrumental in market growth. By late 2019, the global breakfast cereal market had begun to recover, but ready-to-eat have received a boost as customers seek familiar, comforting goods with a long shelf life during the COVID-19 outbreak. Kellogg Co. and General Mills, Inc. for example, has hired additional workers to help meet the increased demand.

Several emerging nations' diets are now being influenced by Western countries. Breakfast cereals, which have long been a staple of the American diet, are getting more popular across Asia Pacific and the Middle East & Africa. Breakfast cereals are promoted as a unique dietary option and an alternative to the conventional meals offered in these areas. Now, more customers are exposed to these through marketing and social media, thus, new potential for cereal brands will broaden. Consumption in the Asia Pacific, particularly India has the strongest growth prospects in the global market.

Although indulgent flavors are popular, cereal manufacturers are also attempting to appeal to consumers who want goods that are made with healthier, less processed components. In established markets like North America and Europe, the nutritional content is a major consideration when developing a new product. Gluten-free, keto-friendly, ready-to-eat and organic/non-GMO breakfast cereals are examples of niche breakfast cereals. Brands combine ancient grains, superfoods, probiotics, seeds, and nuts to enhance value and give products a health halo. Manufacturers are updating their products by offering healthier grains in more convenient packaging, resulting in market growth.

The westernization of global diets, demand for local food preference and flavors, and increasing need for convenient and healthy foods are likely to drive cereal consumption in regions where it has not been a traditional breakfast option. For instance, in July 2018, Nestlé India launched NESPLUS breakfast cereals to cater to the local tastes. The product range comprises multigrain in combination with whole grains to provide a high-quality healthy breakfast to its Indian customers.

The ready-to-eat (RTE) segment dominated the market holding approximately 87% of the overall market value in 2021 and is expected to maintain the trend over the forecast period. In the U.S., ready-to-eat is one of the most popular breakfast options as it is both convenient and nutritious.

The fast-paced lifestyle of the young working population has led to the development of ready-to-eat breakfast cereals. The even more convenient ready-to-eat items, which can be consumed without cooking and appear to be suitable for busy millennials, have therefore surged in popularity. The rising demand for the segment is expected to be fueled by millennial demography. Furthermore, in developing nations, the growth of retail infrastructure such as supermarkets & hypermarkets is another factor fueling the market growth. The proliferation of e-commerce is another significant factor driving industry growth.

The hot cereal segment is expected to be fastest-growing wing segment at 4.9% CAGR during the forecast period 2022-2030. The market is likely to be dominated by Asia's growing economies, such as India. Hot cereals like oats and muesli are becoming more popular in this region, and producers are responding by adding savory options that are both pleasant and healthy in order to expand their customer base. 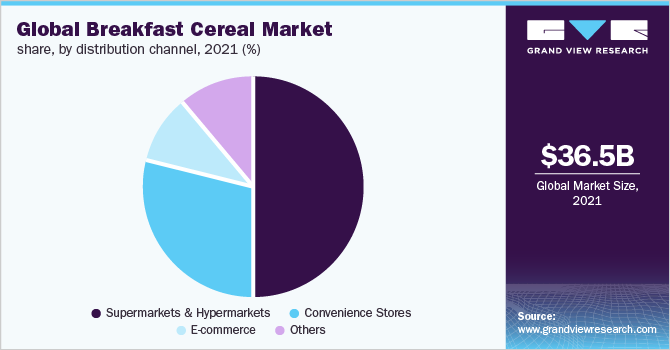 According to a survey conducted by Shop kick in 2019 where more than 43,000 U.S. consumers were studied, the results revealed a third of consumers bought one pack of cereals, 41% bought two, and 19% bought three or more. However, with the emergence of the COVID-19 pandemic, consumers have shifted to purchasing groceries online. This trend is expected to drive the e-commerce segment during the forecast period and is expected to witness a CAGR of 5.8% during 2022 to 2030.

North America held the largest market share globally accounting for around 41% of global value in 2021. The region has the highest penetration in the world, with per capita consumption of both hot and ready-to-eat kinds of cereal exceeding that of other regions. However, the region has been witnessing a decline in ready-to-eat, and regions such as Europe, and the Asia Pacific are showcasing promising growth.

The Asia Pacific is predicted to be the fastest-growing region from 2022 to 2030. The industry growth is significantly driven by the rising consumption of processed food products in countries such as Japan, China, India, and others. Food habits have changed due to the varied health issues faced by consumers across the globe. People are shifting to consume nutritional food products. Hence, breakfast cereals consumption is witnessing a global increase.

According to Kellogg’s India, its sales have surged in India due to rising in-home consumption amidst the COVID-19 pandemic. The company has launched its globally renowned brand Froot Loops in India seeing this incredible opportunity to expand its sales. Furthermore, the company has launched region-specific products to accelerate the proliferation of its products in the growing Indian market. Therefore, Asia-Pacific is proving to be a lucrative market for manufacturers around the globe.

The market is fragmented with the presence of global and regional players offering a variety of cereal options customized to the local palates. These players are focusing on increasing their customer base by cashing in on the nostalgia factor and rising demand for healthy breakfast options during the pandemic period.

Some of the key players operating in the breakfast cereal market include:

This report forecasts revenue growth at global, regional & country levels and provides an analysis of the latest trends and opportunities in each of the sub-segments from 2017 to 2030. For the purpose of this study, Grand View Research has segmented the global breakfast cereal market on the basis of gender, product, distribution channel, and region.

How big is the breakfast cereal market?

What is the breakfast cereal market growth?

Which segment accounted for the largest breakfast cereal market share?

b. North America dominated the breakfast cereal market with a share of 41.3% in 2021. This is attributable to high demand from this region and high per capita consumption.

Who are the key players in breakfast cereal market?

What are the factors driving the breakfast cereal market?

b. Key factors that are driving the breakfast cereal market growth include the rising demand for ready-to-eat food enabled by the fast-paced lifestyles of the working population.