The global Human Immunodeficiency Virus (HIV)-1 therapeutics market was valued at USD 13.5 billion in the year 2015 and is estimated to grow at a CAGR of 1.4% from 2016 to 2025. The market growth can be linked to the surging incidence rate of HIV-1 infection, which unlike the death rate from this viral infection, has not changed substantially over the years as per the Institute for Health Metrics and Evaluation.

This is one of the most challenging diseases the world has ever experienced. Approximately 35 million people across the globe are affected by it. However, among this population, only half the patient number has access to antiretroviral treatments for disease management. Among the two strains of the human immunodeficiency virus, HIV-1 is more prominent and accounts for around 95% of all the infections worldwide. 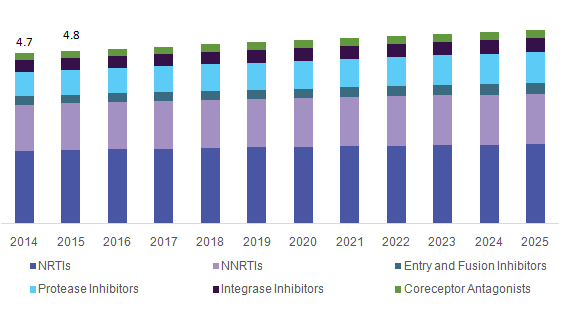 The number of people contracting this viral infection is rapidly increasing worldwide. The disease has mostly affected the developing and underdeveloped countries on a larger scale due to the lack of adequate prevention measures and treatment facilities. Although there is no permanent cure for this infection at present, it can be controlled with proper medical care and drug therapy.

Medical treatment for this debilitating disease enables patients to live a normal life by reducing the intensity of the disease and increasing the survival time. Patients are rapidly diagnosed at present due to technological advancements in point-of-care testing for HIV. Thus, enabling early interventions to prevent disease progression to an advanced stage

The factors responsible for the growing prevalence rate include unprotected sex, contaminated needles or syringes, and majorly the lack of awareness about the mode of transmission. A vital factor driving the HIV-1 market growth is the concerted efforts of the government and various NGOs to provide at-risk individuals with greater accessibility to disease testing and treatment for infected persons.

Several companies, such as Cipla, Inc. and Gilead Sciences, Inc., have also adopted patient education programs to reduce the adverse consequences of the infection. The future growth of this market largely depends upon the unmet diagnostic and treatment needs present in the African and Asian countries.

On the basis of drug classes, the HIV-1 therapeutics market is segmented into six classes, namely, NRTIs, Non-NRTIs, entry and fusion inhibitors, protease inhibitors, integrase inhibitors, and coreceptor antagonists. Most of the anti-retroviral drugs belong to the NRTIs group, thus rendering it the largest class of drugs. 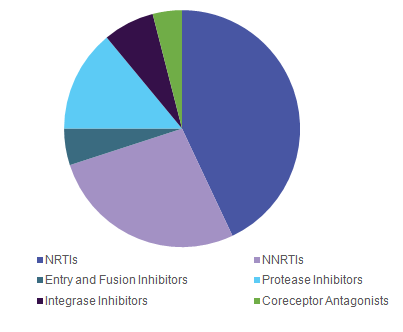 In 2015, the NRTIs segment accounted for over 40% of the market share. NRTIs inhibit reverse transcriptase activity and ultimately arrest viral replication. Generally, the anti-retroviral regimen employed to treat HIV patients involves a combination of anti-retroviral agents belonging to different drug classes, wherein the primary goal is to reduce the viral load. Currently, more than 20 drugs approved by the U.S. Food and Drug Administration (FDA) are commercially available.

North America was the largest HIV-1 therapeutics market in 2015 owing to the high treatment expense, increasing prevalence, and the introduction of drugs with improved efficacy such as Complera by Gilead Sciences, Inc. In 2016, North America and Europe together rare accounting for a high prevalence of 2.4 million people suffering from this infection.

Gilead Sciences, Inc. is the leader in the sector offering a vast anti-retroviral portfolio followed by ViiV Healthcare. ViiV Healthcare is a joint venture by GlaxoSmithKline, Pfizer, and Shionogi. These companies transferred their HIV Assets to ViiV Healthcare as a part of their expansion strategy to attain a higher market share.

This report forecasts revenue growth at global, regional & country levels and provides an analysis of the latest trends and opportunities in each of the sub-segments from 2014 to 2025. For the purpose of this study, Grand View Research has segmented the HIV-1 therapeutics market on the basis of drug class, and region: