The global human milk oligosaccharides market size was estimated at USD 19.3 million in 2019 and is expected to expand at a CAGR of 23.0% during the forecast period. Increasing concerns among consumers regarding gut health and the growing consumption of dietary supplements are expected to drive the growth. Human Milk Oligosaccharides (HMOs) act as prebiotics in the human body and help maintain gut health. They promote bacterial growth, especially bifidobacteria genus, in the gut, which helps improve metabolic activity. The antimicrobial protection and prebiotic functions of the product allow them to be used in various food products, including pharmaceutical and medicinal food and infant formulas. 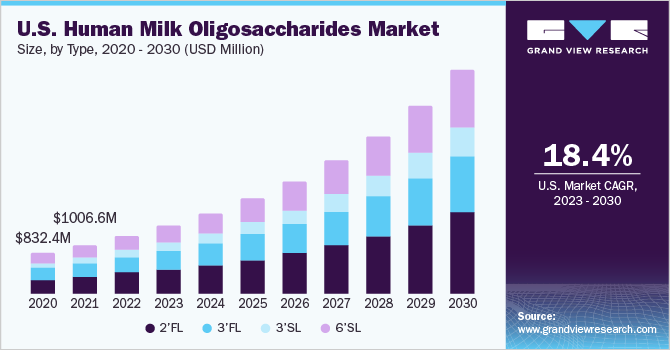 Lack of technology for large-scale production, high R&D cost, and stringent government regulations are likely to restrain the HMO market growth. Infant formula is the largest application segment for the product, which promote health and prevent diseases in infants. Moreover, these play a vital role in brain development and memory enhancement in humans.

The primary functions of human milk oligosaccharides include the prevention of infection, the supply of sialic acid for brain development, and prebiotic effects. Infant formulas derived from bovine milk contain less concentration of oligosaccharides compared to those obtained from human milk.

Several enzymes and chemicals used for manufacturing human milk oligosaccharides are very expensive and have limited availability. This factor is likely to hinder the market growth. Infant formula is the dominant application segment for HMOs, followed by functional food and beverages. The demand for high-nutrition food for children as well as adults is another factor driving the human milk oligosaccharides market.

Human milk oligosaccharides are essential components of breast milk. They promote optimal health and help prevent certain diseases among not just infants but adults as well. They support the digestive, immune, and brain development of an infant. In the case of adults, HMO supplements are found to be helpful for increasing beneficial bacteria in the gut. However, breast milk is not available for all infants, which leads to the synthetic production of HMOs through various production methods.

Human milk oligosaccharides not only provide prebiotic effects but also stimulate the neurological health of human beings. These properties are expected to drive the demand for HMO in functional food and beverages. Companies including Inbiose NV; Glycom A/S; ZuChem, Inc.; and Glycosyn LLC have been making efforts to develop human milk oligosaccharides for functional food and beverages.

Among applications, infant formula dominated the global market in 2019, accounting for nearly 81% of the overall revenue share. The demand for HMOs in designing infant formulas is increasing owing to the beneficial properties of HMOs, such as prevention from infection, prebiotic effects, memory enhancement, brain development, and gut health maintenance.

The use of HMOs in dietary supplements offer benefits such as immune support, protection against bacterial and viral infections, digestive comfort, and brain function support. Increasing healthcare costs, changing lifestyles, and a rise in the geriatric population are the major factors driving the food supplements industry, further supported by rising consumer health awareness and increasing disposable incomes.

North America held the largest revenue share of the market for human milk oligosaccharides in 2019. The presence of numerous prominent infant formula and baby food manufacturers along with technological advancements are expected to boost the regional market growth in the forthcoming years. 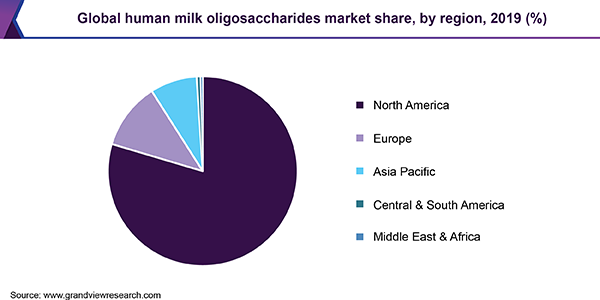 Growing demand for infant food coupled with the presence of a large number of HMO manufacturers and regulatory approvals for HMO as an ingredient in infant formula is anticipated to augment the market growth in Europe. The U.K. has the lowest breastfeeding rate owing to the cuts in public health funding, lack of knowledge about the health benefits of breast milk, and a negative attitude toward breastfeeding in public, which indicates a huge potential for product penetration in the country.

Asia Pacific HMO market is expected to be driven due to factors such as rising population, mortality rate, disposable income, and consumer awareness regarding health and hygiene. Rising concerns regarding gut diseases, high blood pressure, diabetes, and rickets among other chronic diseases have resulted in an increased demand for functional food and beverages, which is expected to propel the regional demand for human milk oligosaccharides. In addition, India and China are rapidly growing markets for dietary supplements and baby food, which is anticipated to further fuel the product demand over the forecast period.

Many manufacturers focus on extensive R&D for developing low-cost technologies to produce HMO on large scales. Presently, the market for HMOs is niche and has considerable scope for development in applications including functional foods and beverages and food supplements. A significant share of HMOs manufactured currently goes into infant formula application. To cater to the growing demand for the product, manufacturers are deploying strategies such as partnerships, agreements, and capacity expansions.

Prominent market participants have invested in R&D activities over the years to innovate their product offerings. For instance, in February 2019, Jennewein Biotechnologie GmbH, a Germany-based functional sugars manufacturer, partnered with Yili.Com Inc., a China-based dairy products manufacturer, to research on infant microbiome and human milk oligosaccharides. This strategy was intended to develop innovative, HMO-based infant formula and was targeted at customers in China. Such developments/strategies are likely to surface over the forecast period, given the rising competition in the market.

This report forecasts revenue and volume growth at global, regional, and country levels and provides an analysis of the latest industry trends in each of the sub-segments from 2016 to 2027. For the purpose of this study, Grand View Research has segmented the global human milk oligosaccharides market report on the basis of application and region:

How big is the human milk oligosaccharides market?

What is the human milk oligosaccharides market growth?

b. North America dominated the human milk oligosaccharides market with a share of 79.6% in 2019. This is attributable to the presence of numerous prominent infant formula and baby food manufacturers along with technological advancements.

Who are the key players in human milk oligosaccharides market?

What are the factors driving the human milk oligosaccharides market?

b. Key factors that are driving the market growth include increasing concerns among consumers regarding gut health and the growing consumption of dietary supplements by end-users.