The global hydrodesulfurization catalysts market size was valued at USD 2.46 billion in 2019 and is projected to grow at a compound annual growth rate (CAGR) of 4.4% from 2020 to 2027. The market is driven by growing regulatory norms regarding the application of cleaner and low-sulfur fuels across the geographies. There has been a paradigm shift in the demand for desulphurization catalysts over the past few years owing to a progressive move towards ultra-low sulfur (ULS) marine fuels, heating oils, and jet fuels.

According to the Organization of the Petroleum Exporting Countries (OPEC) report on world oil outlook, desulfurization additions represent the prominent capacity increase among all process units in the near future. An addition of 12.4 million barrels/day is projected to be needed by 2030 over the present 4.9 million barrels/day desulfurization capacity (excluding naphtha application).

Global refiners are expected to maximize their flexibility for the production of low-sulfur fuel oil (LSFO) and diesel by adding secondary desulfurization units in refineries without increasing overall refinery runs in attempts to meet the demand for LSFO after the implications of new strict rules regarding fuel sulfur content, such as IMO 2020.

Catalytic hydrodesulfurization in oil refining is carried out with a purpose to eliminate most of the contaminants from liquid oil fractions, including metals, sulfur, oxygen, and nitrogen. Therefore, advancements in internal combustion engines in automobiles, coupled with increasing regulations concerning environmental pollution, are expected to drive the demand for hydrodesulfurization catalysts in the near future.

With the unprecedented outbreak of COVID-19, which has led to the closure of factories and manufacturing sites, there has been a significant decline in demand for oil, first such instance in a decade. Global fuel demand is expected to drop by 15-10% in 2020 Q2 due to a halt in air travel and national lockdowns. A number of plants have been shut down and some are running at reduced rates, which may thus impact the hydrodesulfurization catalyst demand, especially in the U.S., China, Italy, France, Germany, the U.K., and India, which are some of the worst-hit economies. The plunge in demand for oil, tumbling oil prices, a decrease in the number of rig counts, and investments in the sector are further likely to leave the industry broken and have been a crucial challenge faced by the manufacturers. The aforementioned pointers, in turn, will severely impact the market growth in early 2020.

Load type hydrodesulfurization catalysts emerged as the dominant type segment, accounting for a revenue share of 89.9% in 2019. The hydrodesulfurization movement of the supported catalysts is influenced by numerous factors, including active component, type of support, pH of the impregnation solution, organic-inorganic additive and its content, metal-support interaction, slab length-stack number, type of promoter and its content, and sulfidation conditions, including time and temperature.

In supported hydrodesulfurization catalysts, promoter content, metal additives, moderate sulfidation temperatures, hydrogen as activation gas, weak metal-sulfur bond energies, among others are essential for high hydrodesulfurization activity. The aforementioned factors can aid in the formulation of catalysts, which can be used in producing fuels, and thus fulfill the need for ultra-low sulfur fuels. This is estimated to trigger market growth over the forecast period.

Diesel emerged as the prominent application segment of the market with a revenue share of 48.4% in 2019. Diesel fuel is manufactured via the hydrodesulfurization process, wherein the sulfur present in organic sulfur components of the gas oil is eradicated as hydrogen sulfide. The use of sulfur-free diesel has become a trend across the globe in the last decade. Mounting demand for high-performance hydrodesulfurization catalysts from several international refineries to manufacture sulfur-free diesel is expected to fuel the segment growth over the forecast period.

Demand from naphtha application is predominantly for sulfur removal. Naphtha is a mixture of liquid hydrocarbons with a vapor pressure of around 0.69 bar and boiling range from 40°C to 140°C. Processes such as catalytic cracking, crude distillation, visbreaking units, and delayed coking are used to manufacture naphtha with a comparatively low octane number and comprise various types of impurities simultaneously. Oxygen, nitrogen, sulfur, and several other impurities in naphtha are observed to be poisonous for Pt catalyst activities. Therefore, the removal of these impurities is a key concern for the manufacturers, which creates the demand for hydrodesulfurization catalysts. 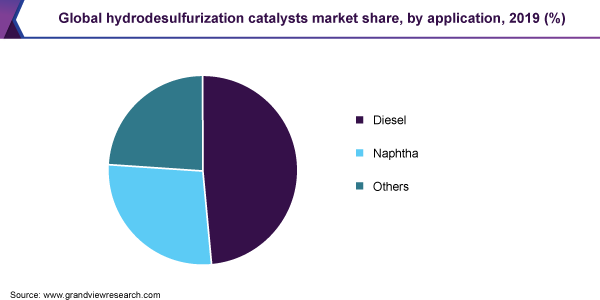 In 2019, North America emerged as the largest regional market for hydrodesulfurization catalysts, accounting for a revenue share of 30.2%. The market in North America is driven by rising concerns about the harmful effects of sulfur dioxide on human health and the environment, along with the implications of regulations and norms that restrict the sulfur content in automotive fuels, such as diesel, natural gas, gasoline, and other distillates. According to the norms laid by the U.S. EPA, ultra-low sulfur diesel with a maximum of 15 ppm sulfur content is mandatory for all locomotives and marine vessels in the U.S. The operating petroleum refineries in the U.S. are expected to further boost the sales of hydrodesulfurization catalysts in the North American market. According to the U.S. Department of Energy, a total of 132 refineries were operating in the U.S. in 2019. The total catalytic hydrotreating/desulfurization capacity of fuels, such as naphtha, gasoline, heavy gas oil, and distillate fuel oils (including kerosene and diesel), in the U.S., was 17,794,574 barrels per stream day in 2019.

Followed by North America, the market in Asia Pacific is driven by growing investments in the establishment of new refineries as well as the expansion of existing refineries in the region. The recent implementation of the International Maritime Organization (IMO) 2020 mandate worldwide aiming to reduce sulfur emissions from ocean vessels by 80% is expected to create significant growth opportunities for the market in Asia Pacific. According to the Oxford Institute for Energy Studies, China is expected to produce over 18 million tons of very-low-sulfur fuel oil (VLSFO) by 2020 and increase it to 30 million tons by 2023.

The shift towards clean fuels in Europe has prompted huge investments made by the refiners for upgrading and expanding their units with advanced equipment and technologies for producing cleaner automotive fuels while meeting the new sulfur emission regulations, such as Euro 4, Euro 5, and Euro 6 specifications and IMO 2020 mandate. In Middle East and Africa, Kuwait, UAE, and Saudi Arabia are some of the large exporters of low-sulfur crude oil globally. Fujairah, which is the world’s second-largest port for bunker fuel, underwent extensive upgrades for producing low-sulfur fuel in compliance with IMO 2020.

Key manufacturers of the product include players such as Albemarle Corporation and Royal Dutch Shell PLC that collectively hold a significant market share in terms of revenue. These players have global operations and diversified product portfolio. Players such as China Petrochemical Corporation (Sinopec Group) and Axens are forward integrated into the value chain, wherein they manufacture hydrodesulfurization catalysts and use them for the purification of petroleum products. These companies have a cost advantage over other non-integrated catalyst manufacturers and are constantly involved in increasing the overall profit margins, gaining high economies of scale.

Prominent operational strategies of the market players include positioning in high-growth regions, acquisitions, investments, and building and operating fully optimized supply chains. Intensive R&D for sustainable new generation high-performance catalysts by the adoption of new technologies, such as nano-technology, is a key product strategy. JGC C&C produces catalysts majorly based on nanotechnologies, such as macrostructure control technology and nanopore control technology.

The manufacturers are also focused on establishing long-term supply contracts with distributors/suppliers to ensure the continuous supply of their products and technology licensing for revenue increases. For instance, LyondellBasell granted a license to CNPC in 2019 for strengthening CNPC’s catalyst manufacturing know-how. Some of the prominent players operating in the global hydrodesulfurization catalysts market are:

This report forecasts volume and revenue growth at the global, regional, and country levels and provides an analysis of the latest industry trends and opportunities in each of the sub-segments from 2016 to 2027. For the purpose of this study, Grand View Research has segmented the global hydrodesulfurization catalysts market report on the basis of type, application, and region: