Global naphtha market size was estimated at 270.7 million tons in 2014. This industry is expected to witness significant growth over the next seven years on account of increasing demand for transportation fuel globally. Rising product demand in hydrocarbon cracking process is expected to steer its demand in the petrochemical industry.

Other sources of naphtha production include coal tar and wood feedstock. Type of feedstock is incorporated depending on process yield and demand of downstream products including formaldehyde, pigment, chemical solvent, and fuel.

Based on the hydrocarbon structure and refinery process, there are primarily two compositions of naphtha i.e. paraffinic and heavy formation. Heavy naphtha also known as straight run benzene (SRB) is most commonly used in refinery catalytic reformers to enhance octane number of the fuels.

Primary applications include the production of gasoline and steam cracking of aromatic petrochemicals and olefins. Various factors affect the economic outlook of these processes including feedstock-to-yield ratio, refinery margins, existing geopolitics, OPEC-controlled prices, and crude oil supply-demand scenario. A major application of aromatic form includes the production of fats, rubber, and personal care products. Regulations on benzene content of gasoline and crude oil pricing are anticipated to affect market growth over the forecast period.

Stringent government regulations coupled with political factors governing regional economies is anticipated to influence global trade policies. Financial outlook plays a major role in the commercialization of refinery projects, and it is affected by the geopolitical situation of the regions. The synergy between regional demand and refinery output affects capacity expansions thereby influencing storage of surplus products in the operating units.

Naphtha usage as a chemical feedstock was the major application segment and accounted for over 65% of the total volume share in 2014. It is used in steam cracking process to produce ethylene, propylene, and gasoline. Other application includes catalytic reforming process that involves extraction process of benzene, toluene, and xylene.

Naphtha has emerged as a crucial mainstream chemical which has a broad spectrum of applications. The key application scope includes the utilization of naphtha as an industrial solvent, wherein it is primarily used in formulation of household cleaners, fumes for handheld lighters, oil painting, production of gasoline, shoe polish ingredient, stain remover and more.

Light naphtha plays a major role in petrochemical steam crackers. Major products of the cracking process include olefins and aromatics. Olefins form the primary feedstock for plastics production including polyethylene and polypropylene. Other chemical processes including production of chemical intermediates, polymers, and synthetic rubber utilize olefins as a primary resource.

Among several other applications, naphtha is also used as a source of fuel and fuel additive. The major utility as fuel lies in application across industrial & residential heating units, cigarette lighter, power stoves & burners, and more. They are also used as a key feedstock for formulating petrochemicals, which includes gasoline and butane among others.

Growing plastics demand in construction, packaging, and electrical & electronics is expected to steer market growth over the foreseeable future. Energy & fuel accounted for over 25% of the total naphtha market revenue share in 2014. Naphtha is also used in some niche end-use segments as white petroleum liquid including the camp lanterns and stoves. Growing scope in above-mentioned applications is anticipated to drive growth over next seven years.

Asia Pacific naphtha market dominated the global demand and accounted for over 45% of the total volume share in 2014. Asia Pacific emerged as the major exporter of petroleum products in 2014. Increasing population coupled with increasing electrical and transport equipment consumption is expected to drive product demand over next seven years. Growing plastics demand in the construction and automotive sectors is also expected to fuel market growth over the forecast period.

Rising production of polymers in developing economies like China, India, and Japan in the region is expected to have a positive impact on the demand for naphtha over the forecast period. However, health concerns regarding exposure to the chemical and stringent laws of European Union are expected to hamper market growth. The demand for naphtha in Europe is expected to witness slow growth after 2020 owing to the changing laws for chemical trade. However, rising demand and production in Asia Pacific indicate some promise for the market. 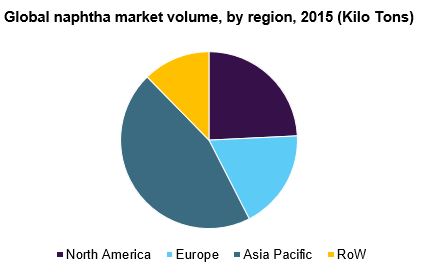 Chemical processes comprising propane cracking and gasoline production are expected to steer product demand in the European market. However, the economic outlook of the downstream segment in this region is anticipated to affect growth in next seven years. U.S. petrochemical industry shifting towards low-cost alternatives such as LPG is expected to hinder product demand in the region. This can be attributed to volatile prices of crude oil and gas fluctuations that affect product demand in various regions.

The shale gas boom in North America has transformed petrochemical manufacturers in the US, Canada, and Mexico from high-cost producers of key petrochemicals and resins to some of the lowest-cost producers globally, second only to the Middle East, thus replacing the usage of naphtha in fuels. This price drop also increased the distillation of shale resulting in an increase in naphtha production.

By-products of steam cracker include butadiene, butane, ethylene, propylene, and gasoline. Growing automotive usage in emerging economies including India, Brazil, and Thailand is expected to fuel gasoline demand in these regions. Other factors promoting such regional growth include recent developments such as sorptive desulfurization process that enhance the environmental performance of automobiles.

High consolidation of oil refineries in the Middle East region is expected to boost product demand over the foreseeable future. Its geographical advantage offers ample opportunity for chemical and energy sectors for utilizing domestic supply thereby minimizing operational costs. This is also expected to provide an opportunity for forwarding integration of plastics processing industry.

Global naphtha market share is highly fragmented with top five players including British Petroleum, Chevron, ExxonMobil, Shell, and CNPC accounted for over 50% of the industry revenue share in 2014. The dominance of these companies in the global market can be attributed to their efficient distribution network across the world. Long term contracts with distributors and acquisition of petrochemical units form an essential strategy of their economic growth.

The top regional players cover an extensive value chain portfolio catering to the ever-increasing industry demands. Quality, price, and product’s compliance with the regulations is observed to be the fundamental pillars in the industry’s growth.

High degree of dependence on crude oil and natural gas industry dynamics has encouraged enterprises to integrate their operations across the value chain starting from raw material suppliers to finished product distribution. Companies such as Mitsubishi Chemical and Reliance Industries have integrated their operations, starting from crude oil and natural gas production to end-product manufacture to increase the economies of scale and overall profitability. Other industry participants include Total SA, Indian Oil Corp., Novatek, Lotte Chemical Corp., Novachem, SABIC, and Mangalore Refinery and Petrochemicals Limited (MRPL).