"Technology advancements such as the development of Backside Illumination (BSI) are anticipated to drive the market."

The global image sensor market size was valued at USD 10,300 million in 2015. The sensing devices are used to overcome the natural light degradation and the quality occurs when the pixel size is decreased. The increasing need for smaller pixel devices providing high resolution with a cost-effective approach is projected to fuel the market growth over the forecast period.

The market has been experiencing a major transformation in the last few years. The technological advancements and intense usage of images across various applications have driven the transformation of image sensors in the global market. With the increasing R&D investments, sensing equipment has become cheaper, smaller, and power-efficient, offering opportunities to the industry players. The increasing mobile phone segment, specifically smartphones, is anticipated to spur the segment growth over the forecast period.

The increasing concerns for surveillance & security in public places including parks, public squares, malls, and railway stations as well as the increasing terrorist attacks are the major factors increasing the need for better resolution cameras for security and surveillance. 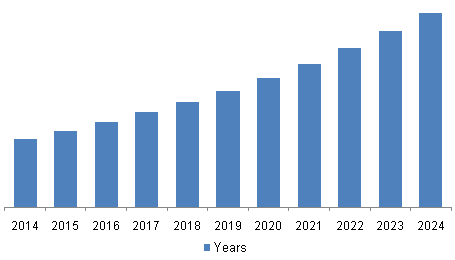 However, the surging need for cell phones and digital still cameras has resulted in shortages in lenses and picture sensors. Furthermore, the dynamic nature of the semiconductor business might restrain the segment growth over the forecast period.

The CMOS technology generated the highest revenue in 2014 and is expected to maintain its dominance over the forecast period owing to its compact nature, low power consumption, and cost-effectiveness, which makes it ideal for use in various applications. It is used in static RAM, microprocessors, microcontrollers, and other analog circuits such as data converters and highly integrated transceivers.

CCD technology is expected to have considerable growth owing to high-cost and high power consumption. CCD technology can be used in various applications requiring an extra sensitivity of the electron-multiplying CCD.

"The rising adoption of ADAS and stringent safety regulations have contributed to the highest growth of the automotive application over the projected period."

Image Sensors application segment can be categorized into automotive, consumer electronics, industrial/defense, medical, and security & surveillance. Consumer electronics dominated the business in terms of revenue in 2015. The proliferation and adoption of dual cameras in smartphones are expected to propel the demand.

Advanced Driver Assistance Systems (ADAS) is expected to be the significant driver for segment growth over the forecast period. Depending on the machine vision, the system reacts to the situation encountered while driving. Also, smarter and compact cameras can also help in managing traffic influencing the demand for traffic surveillance cameras which is expected to further considerably increase the market growth. However, the technology has found a significant shift toward the prevalence across other car segments. The demand is further expected to spur owing to the stringent regulatory norms targeting to improve road safety for drivers and pedestrians over the forecast period.

The growing need for minimally invasive solutions and imaging techniques is anticipated to drive the demand in medical applications. CMOS has opened new perspectives to minimally invasive medical devices such as wireless capsules that are used for the observation of the gastrointestinal tract.

3D Imaging technology is widely accepted in the healthcare and medical industry for better visualization and improved imaging. The growing acceptance among radiologists & surgeons and the increasing use of ultrasound 3D imaging in cardiology and oncology is anticipated to influence the demand for imaging market over the forecast period.

The Asia Pacific region is expected to remain the key revenue-generating region, accounting for the largest share by 2024. Favorable consumer preferences along with the presence of a large number of major manufacturers in the region are some factors accounting for the large share. The region is anticipated to be the largest market in the near future owing to the transition from analog to digital systems. The Asia Pacific region is anticipated to witness significant demand, particularly in India and China, because of the availability of high-end luxury as well as economy vehicles.

The growing infrastructure development and government initiatives toward safety at public places in regions such as India are anticipated to increase the demand for the industry. The government-driven initiatives, such as Make in India and Digital India, are anticipated to boost the penetration of smartphones and other consumer electronics in the region, resulting in increasing the industry demand.

Innovation, new product development, and upgrades along with the frequent launch of new products will be the key growth strategies for the industry players in the upcoming years. The key competitors include Sony Corporation (Japan), Panasonic Corporation (Japan), ST Microelectronics (Switzerland), Canon, Inc., (Japan), and Samsung Electronics Co., Ltd., (South Korea). Merger and acquisitions within the players is also considered to be one of the strategies implemented for developing the enhanced product in the industry. For instance, one of the major industry players, Sony Corporation (Japan), acquired Toshiba Corporation’s (Japan) image sensor business unit in 2016.

How big is the image sensor market?

What is the image sensor market growth?

Which segment accounted for the largest image sensor market share?

b. Asia Pacific dominated the image sensor market with a share of 41.5% in 2019. This is attributable to favorable consumer preferences along with the presence of a large number of major manufacturers in the region.

Who are the key players in image sensor market?

What are the factors driving the image sensor market?

b. Key factors that are driving the market growth include rapid expansion of the wearable industry, increasing investments by market players to develop sensors for the automotive sector, the growing need for better resolution cameras for the security & surveillance sector, and growing medical imaging market.