The global immunohematology market size was valued at USD 1.5 billion in 2015. The market is expected to witness significant growth owing to the development of innovative technologies for blood screening and new product launches. Hospitals and diagnostic laboratories are shifting their preference to automated instrumentation and integration of different functions in a single platform, which is also augmenting the growth.

Industry players are increasingly investing in research and development, thus boosting the market growth. Grifols invested USD 256.97 million and USD 211.95 million in R&D in the year 2015 and 2014, respectively.

Furthermore, rising emphasis on business diversification is also witnessed in the industry. Mergers and acquisitions are dynamic and is a major strategy deployed by key industry players as an expansion strategy.

In March 2016, Immucor acquired Sirona Genomics in USD 14.4 million. The deal was originally signed in 2014 and completed in 2016. The company aims at including HLA typing products in its product portfolio, which was acquired from Sirona Genomic.

Immunohematology reagents accounted for largest share in 2015. This segment accounted for a significant share of demand due to growing number of blood banks and increased use of reagents in the immunohematology tests. The automated analyzers function on some specific reagents, thus making it a compulsory and recurring purchase for hospitals and diagnostic laboratories.

In immunohematology analyzers, automated analyzer is expected to be the faster-growing product over the forecast period. Automated analyzers are more precise, provide faster results, and consume fewer reagents. Some analyzers display instant digital results on the screen, helping faster screening and categorization of blood.

Hospitals accounted for the largest share in the end-use segment of the immunohematology market. It is mandatory for hospitals to check donated blood for infections, set parameters of hematology components, and perform pre-transfusion compatibility tests of donors and recipients. 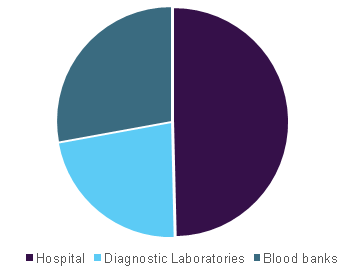 Analyzers, cell counters, and reagents help accelerate the process to make the transfusion procedure efficient and safe. Blood banks are also one of the majority shareholders owing to the increasing number of blood banks, rising awareness about donation, and increased number of voluntary donors across the globe. Grifols operates more than 43 plasma collection centers in the U.S. as a part of its vertical integration strategy, which they acquired in 2002.

In 2015, North America emerged as one of the largest markets. The high number of trauma centers and blood bank facilities is the key reason for high demand for immunohematology products in this region.

Acceptance of new technology and preference of automated technology also contribute to its large share. The U.S. FDA is granting clearance to many advanced technologies based products, which is motivating companies to launch their products in this region.

Europe is also expected to be one of the key shareholders of the hematology market. The presence of industry giants such as Grifols, Roche Diagnostics Corporation, and Siemens Healthcare aids market growth in this region. Asia Pacific is expected to witness growth over the forecast period. Industry players expanding their presence in this region indicate the untapped opportunities in this region.

The dynamic merger and acquisition activities in the industry are helping in the consolidation of the market. Acquisitions of smaller players to enhance product offerings have been a key strategy of growth followed by many companies.

For instance, in March 2013, Immucor acquired transplant and other immune-monitoring segments of Hologic, Inc., named as LIFECODES. It was expected to complement the product portfolio. The segment originally belonged to Gen-Probe Incorporated from which Hologic, Inc. acquired it in August 2012.

This report forecasts revenue growth and provides an analysis of the latest trends in each of the sub-segments from 2013 to 2024. For the purpose of this study, Grand View Research has segmented the global immunohematology market on the basis of product, end-use, and region:

How big is the immunohematology market?

What is the immunohematology market growth?

Which segment accounted for the largest immunohematology market share?

b. North America dominated the immunohematology market with a share of 42.0% in 2019. This is attributable to large number of trauma centers and blood bank facilities and Large cohort of target diseases, such as sickle cell diseases and cancer.

Who are the key players in immunohematology market?

What are the factors driving the immunohematology market?

b. Key factors that are driving the market growth include the development of innovative technologies for blood screening and new product launches and key players are increasingly investing in research and development.