The global implantable cardiac rhythm management device market size was valued at USD 17.04 billion in 2021 and is expected to expand at a compound annual growth rate (CAGR) of 6.2% from 2022 to 2030. The increasing prevalence of cardiac disorders, growing geriatric population base, and technological advancements are the major factors leading to the market growth. Furthermore, supportive legislative regulations, favorable reimbursement policies, and technological advancements are anticipated to drive the market globally over the forecast period. 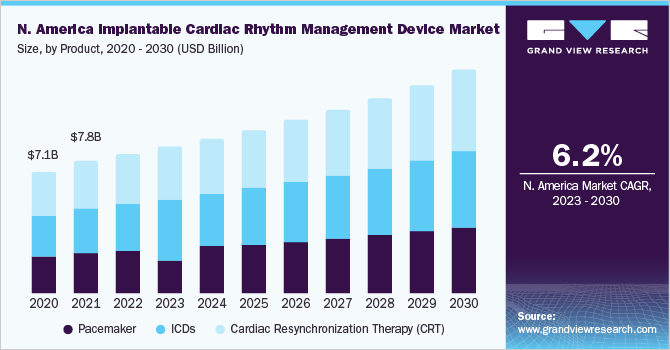 The COVID-19 pandemic has impacted all industries, including the market for implantable cardiac rhythm management (CRM) devices. Market players have experienced significant losses in their CRM segments due to the postponement of cardiovascular procedures. For instance, Medtronic experienced a 12% decrease in its CRM devices segment in 2020, as compared to 2019. The decline was majorly experienced in ICDs, CRT-Ds, and the pacemakers segment. In 2021, Medtronic is recovering in terms of its annual revenue as well as cardiac rhythm and heart failure segment revenue. The company experienced a rise of 4.16% in its total revenue from 2020 to 2021.

According to the Center for Diseases Control and Prevention (CDC), as of February 2022, Cardiovascular diseases (CVDs) are a major cause of mortality in the U.S. One-fourth of all deaths are likely to be caused by CVDs. Stroke and ischemic heart disease are the major causes of more than 80% of all CVD-related deaths. According to a report published by the CDC in 2017, CVDs accounted for about 800,000 lives lost in the U.S. In addition, Coronary Heart Disease (CHD) accounted for the majority of CVD deaths, followed by heart failure and stroke with the economic burden of CVDs likely to be around USD 1,044 billion by 2030.

Favorable reimbursement policies, such as the U.S. Medicare system, are among the major factors driving the implantable cardiac rhythm management device market. For instance, Medicare Physician Fee Schedule Final Rule 2019 is expected to provide reimbursement for implantation and removal of a pacemaker, reducing the overall cost of surgery for the patients. Reimbursement can be availed for devices such as single-chamber, dual-chamber, and biventricular pacemakers.

The ICDs segment accounted for the largest revenue share of over 45.0% in 2021. CRM implantation is widely adopted in the treatment of sinus node dysfunction and conduction disorders. Increasing application of these devices for the treatment of arrhythmias, heart failure, and ongoing clinical investigations are some of the major factors leading to market growth. Furthermore, initiatives such as device registries by individual cardiologists and national societies are expected to provide a database for various device manufacturers for product improvement, thereby increasing market opportunities in the coming years.

The increasing prevalence of CVDs such as atrial arrhythmias, fibrillation, long QT syndrome, bradycardia, and tachycardia and the rising unhealthy lifestyles have led to market growth. Additionally, the increasing number of skilled physicians and healthcare practitioners and joint efforts of governments and major market players to increase patient access to these implantable cardiac pacemakers are expected to boost the market growth during the forecast period. The rising prevalence of CVDs, coupled with advanced pacemaker technologies, is anticipated to foster market growth. For instance, according to the CDC, in 2017, atrial fibrillation is the most common category of heart arrhythmia that has affected an estimated population of 2.7 to 6.1 million in the U.S.

The hospitals segment accounted for the leading revenue share of over 50.0% in 2021 owing to deeper product penetration, a large volume of surgical procedures, and rising patient footfall. Furthermore, the presence of favorable reimbursement facilities has led to a large market share. Continuous efforts by the government to reduce the burden of CVDs and the price of devices in hospitals while increasing the awareness regarding various reimbursement programs for CVD treatments are expected to provide newer opportunities in the hospitals segment over the coming years. 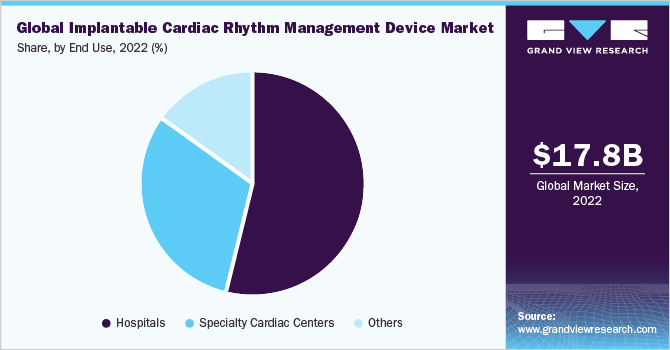 The growing prevalence of several CVDs, such as cardiac arrest and bradycardia, is also propelling the growth of the market. To reduce the rate of mortality caused by cardiovascular illnesses, hospitals in developed regions have already started to use CRT-Ps for managing heart failures. Moreover, many doctors now provide minimally invasive surgeries for CRT-P implantation. These procedures are safer and also reduce the blood transfusion requirement.

North America captured the largest revenue share of over 45.0% in 2021 due to technological advancements, miniaturization, leadless or biocompatible materials, and government regulatory approvals are some of the other factors propelling the market growth in the region.

The European market is expected to grow in the years to come due to an increase in the geriatric population, technological innovations, and the growing prevalence of CVDs. The market in Europe is majorly dominated by a few players, including Medtronic, Abbott, and Biotronik. Medtronic, particularly, has a strong presence across Europe and is often at the forefront of new technological developments.

Various efforts have been made by organizations, such as the American College of Cardiology and China Cardiovascular Association in Asia Pacific, to work together to develop innovative technologies in heart care. According to Heart Health Asia, CVD is the leading cause of death in Asian countries, with more than 9.5 million CVD-related deaths recorded in 2017. The economic burden due to CVDs is increasing because of the rapidly aging population as the elderly are at a higher risk of CVDs. The rapidly aging population is especially a concern in North Asian countries such as Japan, China, and Korea, which is expected to lead to market growth due to the higher prevalence of CVDs.

The high prevalence of various cardiac disorders and lack of favorable insurance policies in Latin American countries have led to sluggish market growth. According to various government reports in 2017, more than half of the country’s population does not have access to social security or private insurance that can cover an ICD or a pacemaker implant, and almost 44% population lives in poverty.

The market is majorly dominated by a few players, including Medtronic, Abbott, and Biotronik. Medtronic, particularly, has a strong presence across Europe and is often at the forefront of new technological developments. The increasing older population with its high risk of SCA and the introduction of advanced technologies are the major factors driving the market. For instance, in 2017, Philips and Dubai Health Authority developed a tailored project that aims to distribute defibrillation and cardiopulmonary resuscitation (CPR) within a four-minute window to increase the survival rate.  Such initiatives are expected to raise awareness and improve patient care practices, thus driving the market for cardiac devices.

Furthermore, technological advancements such as MRI-friendly, leadless pacemakers are expected to propel market growth. For instance, in October 2020, Abbott launched its new ICD and CRT-D in India, hence expanding its product portfolio in the country. The company had also received CE Mark approval for its Gallant ICD and CRT-D devices in February 2020.

This report forecasts revenue growth at the global, regional, and country levels, and provides an analysis of the latest industry trends and opportunities in each of the sub-segments from 2017 to 2030. For the purpose of this study, Grand View Research has segmented the global implantable cardiac rhythm management device market report based on product, end use, and region:

How big is the implantable cardiac rhythm management device market?

b. The global implantable cardiac rhythm management market size was estimated at USD 17.04 billion in 2021 and is expected to reach USD 17.9 billion in 2022.

What is the implantable cardiac rhythm management device market growth?

b. North America dominated the implantable cardiac rhythm management market with a share of 45.5% in 2021. This is attributable to factors such as technological advancements, miniaturization, leadless or biocompatible materials, and government regulatory approvals.

Who are the key players in the implantable cardiac rhythm management device market?

What are the factors driving the implantable cardiac rhythm management device market?

b. Key factors that are driving the implantable cardiac rhythm management market growth include the increasing prevalence of cardiac disorders and a growing geriatric population base.