The global in-car infotainment market size was valued at USD 17,181.7 million in 2018 and is expected to register a CAGR of 12.6% from 2019 to 2025. The growing demand for systems that can facilitate in-car comfort, entertainment, and convenience, including on-demand music, smartphone integration, live audio streaming, and various other entertainment services, is expected to drive the in-car entertainment industry growth. Automakers are also increasingly incorporating such systems in their automobiles having realized that such features can readily influence a consumer’s buying decision.

The rising levels of disposable incomes in emerging economies, particularly in the Asia Pacific, are allowing customers to spend on high-end and luxury cars that are equipped with these systems. Advances in technology have also led to the introduction of advanced graphic user interfaces, voice recognition, intuitive touchscreen, and other facilities in these systems. All such trends bode well for the growth of the in-car infotainment market over the forecast period. 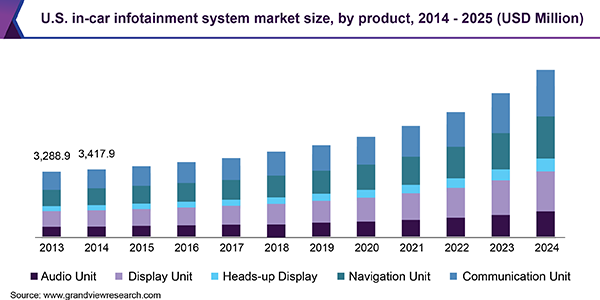 The growing usage of tablets in cars is encouraging OEMs to develop customized tablets for their vehicles. For instance, Audi has designed a 10.1-inch automotive-grade tablet specifically for its vehicles. The tablet can be connected to the vehicles’ infotainment system and used by passengers sitting in the front seats as well as in the rear seats. The tablet is particularly designed to withstand high temperatures and can also be unlocked for using it outside the vehicle.

The head-up display (HUD) systems are expected to be equipped with augmented reality (AR) technology, which uses a combination of cameras, sensors, Wi-Fi, and GPS to provide dynamic information while driving. Although such an arrangement can help the driver in making informed decisions, there are rising concerns that excess information displayed by the system can also distract the driver, thereby compromising with the safety of the drivers as well as the passengers.

The sizes of the display units are increasing continuously owing to the incorporation of complex multimedia and safety features, such as rearview camera and comprehensive information displays, into these displays. The screen sizes are expected to reach 7.0 inches and even surpass that limit further. Large-sized display units are expensive and can hence be found mainly in luxury vehicles. TFT-LCD and AMOLED displays are some of the upcoming display technologies that are expected to be implemented in infotainment systems.

Communication units are becoming reliable due to the continued rollout of 4G LTE networks, which allow the use of advanced onboard features, such as 3D navigation, hands-free calling, satellite radio, and media streaming. Moreover, the initiatives being pursued to roll out 5G networks are expected to add to the connectivity features available in infotainment systems.

Navigation systems have improved readily owing to cloud connectivity, which enables real-time location detection and compatibility with multiple portable devices. Meanwhile, features, such as geotagging, allow the users to obtain information on a particular location that has been geotagged through digital photographs.

OE fitted products are expensive. They are also standardized and hence offer lesser scope for customization. They can be procured through authorized dealers and distributors. The products offer benefits, such as easier and convenient servicing and maintenance, and are often covered under the car manufacturers’ warranty. OE fitted systems have an added benefit of having access to car data, thereby allowing the company to carry out direct marketing campaigns and raising alerts for service and support.

Passenger car drivers are increasingly getting accustomed to the use of digital technology in cars. Innovations, such as gesture control and voice-based command systems for multimedia, are expected to drive the growth of the in-car infotainment system market. The incorporation of these features adds to the convenience of the drivers. At the same time, the introduction of smart navigation and familiar path routing helps in ensuring a safer journey, thereby driving the growth of the in-vehicle entertainment systems industry over the forecast period.

The use of infotainment systems in commercial vehicles is particularly higher in developed regions of North America and Europe. In these regions, logistics companies are utilizing these systems to manage their fleet by obtaining real-time information regarding the vehicles’ location. Vehicle owners are also tracking fuel consumption leveraging these systems. Other benefits provided by these systems include tracking the drivers’ performance and identifying the areas of improvement. 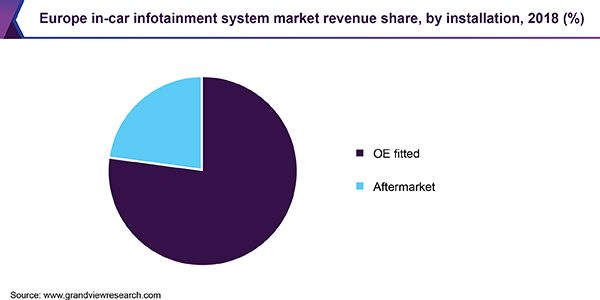 The North American regional in-vehicle infotainment industry generated the highest revenue of USD 5,723.1 million in 2018. North America is home to the key industry participants and hence the region has taken a lead in the development and adoption of advanced in-car infotainment systems. The growing preference for voice recognition systems and driver distraction mitigation systems is expected to drive the growth of the regional market. The growing end-user preference for HD in-dash display monitors is another noticeable trend that has been catching up in the regional in-vehicle infotainment systems industry.

The Asia Pacific regional automotive entertainment industry is estimated to grow at the highest rate over the forecast period. The growing levels of disposable income of consumers are particularly allowing them to buy passenger cars with the latest amenities. The rising sales of premium cars in China are particularly expected to contribute to the growth of the Asia Pacific regional automotive entertainment systems industry. Furthermore, increasing the adoption of smartphones coupled with the rising demand for in-car infotainment systems with smartphone integration technology is expected to drive the regional market growth over the forecast period.

Moreover, the continued introduction of systems that can support multiple applications is allowing market players to offer a wide range of infotainment systems. As such, market participants are collaborating with prominent OEMs to strengthen their foothold in the automotive infotainment systems industry. For instance, in January 2017, Continental AG collaborated with Inmarsat plc, a mobile satellite company, to develop solutions for providing over-the-air updates to Electronic Control Units (ECU) in vehicles. The solution allowed users to update their vehicle electronics without dealing with multiple network operators. It is efficient, reliable, and cost-effective and can be customized as per user requirements.

This report forecasts revenue growth at global, regional, and country levels and provides an analysis of the latest industry trends in each of the sub-segments from 2014 to 2025. For this report, Grand View Research has segmented the global in-car infotainment market report based on product, installation, application, and region: