The global indium market size was estimated at 810 tons in 2016. Increasing product and its derivatives consumption for the production of electronic items such as transparent conductive layers in flat panels, LCD, LED, touch panels, electroluminescent lamps, and in aircraft engines, are expected to be the major factors driving the demand over the forecast period.

Indium as a metal possesses several distinctive properties. Some of these include a high rate of thermal transfer, softness, unique bonding with nonmetallic substances, consistent properties at cryogenic temperatures, and cold welding. These expediencies of the element over its substitutes make it a perfect choice for its end-use product manufacturers.

Increasing product requirements, mainly for the manufacturing of medium and small-sized LCD panels in comparison with large-sized panels, owing to significantly rising utilization for gadgets such as tablets, smartphones and e-books are some of the key points anticipated to set influencing trends in the element demand from 2017 to 2025. It also has an important role in the manufacturing of photovoltaic films.

The development of new technologies for indium recycling from various electronic products keeping in view its economic importance and high supply risk is expected to be another important factor driving the market over the forecast period. One of such technical development in the recent past is the cementation process, by which a solid substance is formed out of a solution. For this purpose, zinc metal powder was used in the solution to collect indium, which becomes solid by reacting with zinc during the process.

However, numerous supply concerns and extensive price volatility associated with the element are anticipated to hinder the large-scale deployment of new & advanced technologies relying on the product. This issue has in turn led to intensive R&D of substitutes for indium and ITO.

Some of the currently available substitutes in the market are Poly (3,4,-ethylene dioxythiophene) for touch screens & flexible displays and gallium for photovoltaic cells. These are hence the probable factors to restrain the product growth in the next eight years.

Though this element is classified as heavy metal, the health effects of the product exposure are little known and EPA doesn’t classify this metal as being of high concern. EPA regulatory norms that govern the market include Preliminary Assessment Information Rules under the Toxic Substances Control Act. Moderately favorable regulatory norms in the EU and other regions are expected to support demand in end-use applications.

The primary indium segment was the largest product category in 2015 with a net worth exceeding USD 116 million for the same year. The increased consumer dependency and production capacities for electronic and semiconductor products such as solders, LCD displays, flat-screen television, computer monitors, and touch screen devices are expected to enhance the consumption of the product category significantly.

The secondary indium segment is estimated to emerge as the fastest-growing product segment in the future. As it is a precious metal, a demand-supply constraint is expected to be a matter of concern in the near future. A higher percentage of secondary indium type is manufactured from the reprocessing of the post-industrial ITO, mainly in emerging economies including China, South Korea, and Japan, which are the major ITO and panel producers globally.

However, consistent changing demand-supply pattern impacted by socio-economic factors is anticipated to be a subject of concern in the near future. Hence, global players are involved in discovering novel secondary lithium products recycled from waste electrical items to maintain sustainability in the consumption and production of the metal.

Moreover, the reprocessing of lithium from electronic devices records for a very low recovery rate which is considered as the main drawback for the growth of the secondary indium industry. However, some thermal, hydrometallurgical, and mechanical processes have been commercialized in the recent past for obtaining higher product yield. These factors are estimated to create ample opportunities for industry participants in the next eight years.

The global demand for the element has witnessed a paradigm shift owing to the rising utility of electronic gadgets in the twenty-first century. Indium tin oxide (ITO) was the largest application segment while accounting for over 65% of the total demand in 2015. ITO demand is anticipated to increase owing to its rising application in flat panel-liquid crystal displays, thin-film photovoltaics, architectural windows, polymer-based electronics, and smart windows. ITO is an optoelectronic material that is applied extensively for research purposes and even in industrial goods.

Product demand in solders and alloys segment followed the ITO segment in 2015. Indium is added to solders & alloys owing to its superior characteristics and it increases the hardness, strength, helps in corrosion resistance of the alloys, and conduces a high resistance to fatigue and seizure. Alloys containing indium are majorly used in the manufacturing of ball bearings. 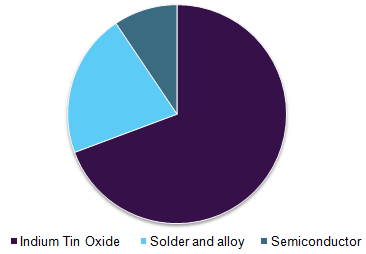 Properties such as its low vapor pressure, ductility, and malleability, make it an appropriate choice for utilization in high vacuum applications and enable solders for withstanding drop tests with superior results than many other low melting alloys. These are yet another vital advantages that the product has over its substitutes, making it the most suitable material for sealing and solder purposes. These important characteristics are anticipated to drive the indium market growth in the solders and alloys application segment in the next eight years. The semiconductor application segment is expected to experience moderate growth over the forecast period.

Asia-Pacific was the largest consumer market in 2015 and accounted for around 42% of the total revenue in the same year. China is the major producer and exporter of indium globally from the past decade. However, recently its consumption in China has increased significantly and the country has transitioned from a primary exporter to a major consumer globally.

Along with it, increasing domestic production and rising demand in the country has resulted in upward pressure on product pricing. Moreover, the other developing nations in the region such as India and Japan have been witnessing remarkable economic growth which is expected to influence the regional market.

Increasing population, rising disposable income & buying power, and increasing living standards have resulted in spurring production and even domestic sales of indium containing end products and other electronic items, hence driving the market in the region.

It was followed by North America, which is expected to grow at a CAGR of 6.3% from 2017 to 2025 in terms of volume. The presence of a large number of industry participants in the manufacturing of semiconductors, ITO, solders & alloys, mainly in the U.S. is anticipated to be the major driving force for the market in the region. Europe is expected to experience moderate growth over the forecast period with a limited number of indium refiners mainly in Germany, France, and Belgium.

Economic and efficient extraction techniques, better refinement of the element, improvement in application and development in material quality are expected to be the key factors for being competitive in the global industry, with frequent mergers and joint ventures being undertaken as an endeavor to expand product portfolio and gain higher market share.

This report forecasts volume and revenue growth at global, regional & country levels and provides an analysis of the industry trends in each of the sub-segments from 2014 to 2025. For the purpose of this report, Grand View Research has segmented the global Indium market on the basis of product, application, and region: