Industrial and commercial LED lighting market size was estimated at USD 21.53 billion in 2014 and is expected to witness significant growth over the forecast period. High efficiency, reliability, and longer life span are expected to drive LED demand over conventional technologies. High brightness level, condensed size, low power consumption and robust nature are some of the other factors projected to trigger industry growth. 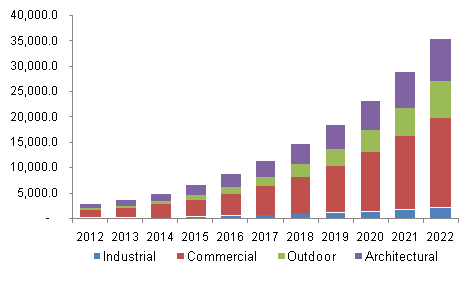 Smart lighting is also expected to offer lucrative opportunities for application in commercial and industrial areas. It has the ability to adjust the amount of light required using control zones. Smart city schemes have become prevalent in the U.S. and Europe with rising focus on strategies to reduce peak power demand and the overall consumption of energy.

High initial cost and dominance of fluorescent lamps may inhibit industrial and commercial LED lighting market growth. However, government regulations to ban incandescent lamps are expected to minimize the impact over the next few years.

The industry can be classified on the basis of application into industrial, commercial, outdoor, and architectural segments. The architectural application includes illumination of building structures, digital signage, statues, landscapes and columns and other decorative features.

Faster price erosion of LED lights has implications for its penetration in various application areas, decreasing the size of traditional lighting in terms of both, units and revenue. The industrial segment is expected to be slow growing as compared to other counterparts owing to the presence of existing and widely used high-intensity discharge (HID) and fluorescent technologies with high performance.

Outdoor applications include corporate campus, airport, industrial warehouse government & healthcare, municipal and other non-public outdoor areas. Its demand can be affected by public policy interventions and municipality. Government initiatives such as LightSavers program by The Climate Group are expected to triggers the substitution of traditional counterparts. Growing demand for high resolution 10 mm signs and billboards, which are ideal for high-volume pedestrian traffic zones, and customizable content are expected to revolutionize the outdoor display industry over the next seven years.

Europe industrial and commercial LED lighting market is anticipated to account for substantial share due to rising government investment and ban on producing and importing incandescent lamps.

Asia Pacific is also expected to be one of the leading contributors due to high construction rates, replacement of existing outdoor infrastructure and government funding for high-efficiency building lighting. The Chinese government has provided huge incentives to replace traditional streetlights with LEDs in order to deploy standardized quality products and solutions. In 2012, the government also announced to ban imports and sales of 100-watt and higher incandescent bulbs which is further expected to elevate demand. In addition, increasing investment in infrastructure including roads, shopping centers, and rapid urbanization in countries such as Mexico, India and Taiwan has created for energy efficient technologies.

Other countries such as Russia, Germany, Denmark and the UK are focusing on deploying efficient methods to improve quality and lower the overall cost.