The global infection control market size was estimated at USD 150.4 billion in 2016 and is anticipated to grow at a CAGR of 6.2% throughout the forecast period. The market is predominantly driven by growing number of surgical procedures that require high intensity infection prevention. The high preference is presumed to be a consequence of positive clinical outcomes associated with usage of infection control.

The rising number of government initiatives to ensure high degree infection prevention is presumed to be a significant driver of the market. The government organzations are increasingly involved in issuing guidelines in order to promote awareness pertaining to efficient prevention measures globally, which is expected to contribute to the market growth throughout the forecast period. 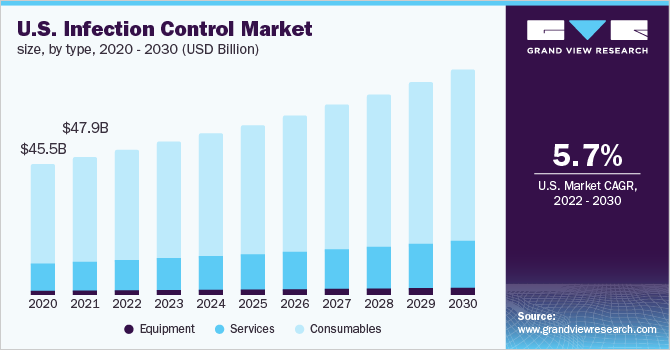 For instance, the World Health Organization (WHO) has issued guidelines for prevention and control of pandemic- and epidemic-prone acute respiratory diseases in healthcare. The guideline range from standard precautions such as hand hygiene, usage of personal protective equipment, to guidelines for disinfection and sterilization.

According to the statistics published by WHO, Acute Respiratory Diseases (ARDs) is one of the major causes of high mortality rates globally. Approximately 4.0 million deaths occur every year due to ARDs. The aforementioned statistics exemplify the high need for stringent prevention and control.

According to practical guide published by the WHO on prevention of HAI, the increase in hospitalization duration with surgical infections was found to be approximately 8 days. These prolonged stays are predicted to be a significant contributor to the overall costs, incurred during the hospitalization period, thus, raising the clinical urgency for adoption of infection prevention measures.

It is presumed that prolonged hospital stay is also not economical for the hospitals and healthcare payers as a consequence of excessive usage of resources to treat the acquired infection. These additional costs are majorly generated through increased usage of drugs, additional diagnostic studies, laboratory equipment, creating a resource allocation imbalance.

In 2016, consumables constituted the largest share of the type segment. The dominant share captured by consumables is predicted to be consequence of consistent usage and short life cycle possessed by these products. Consumables are being extensively incorporated in disinfection, sterilization & other control procedures and are indispensable part of the aforementioned procedures, thereby, accounting for a larger share.

These organizations also strive to promote the adoption through issuing guidelines and recommendations for selection, risk assessment, rational usage, removal, considerations to reduce the risk of transmission of respiratory pathogens to healthcare workers and other medical staff within a healthcare facility.

In the type segment, services are expected to grow at a lucrative rate throughout the forecast period. This fastest growth is attributed to the high inclination of market players to reduce overall healthcare expenditure along with utilization of benefits involved. It primarily includes cost advantages, increased efficiency of services, enhanced productivity, and a significantly higher focus on the core areas of development, which are highly critical to a company’s overall profit and growth.

Hospitals held a dominant share with a share in the end-use segment in 2016 and are anticipated to attain growth at a fastest CAGR throughout the forecast period. The substantial share is majorly a consequence of high probability of acquiring infections in hospital premises through respiratory or blood borne pathogen transmission.

HAIs are one of the major challenges and thus requires stringent control. This has urged the hospitals and public health organizations to adopt highly efficient control systems. Also, as per a research published in NCBI, 40% to 60% of hospital infections were estimated to be of surgical sites. 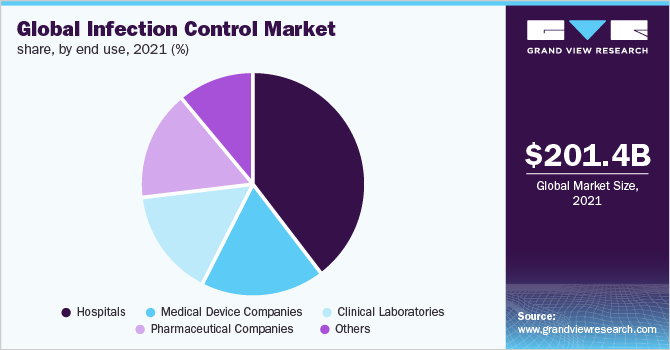 High risk of infection from bloodborne pathogens, drug resistant pathogens and others in operating room is one of the major concerns. For instance, frequent usage of urinary catheters poses a high risk of UTIs and may result in catheter-associated (CA)-UTIs. According to a research published in NCBI, UTIs account for 25% of all bacterial infections.

As per the data published in National Nosocomial Infection Surveillance (NNIS) system report, most hospital-acquired UTIs are associated with catheterization and CA-bacteriuria is the most frequently occurring HAI globally, accounting for up to 40% of HAIs in the U.S. each year. These factors are expected to widen future growth prospects of the market.

In 2016, North America accounted for a dominant share of the market. Consistent number of strategic collaborations adopted by key market players to widen their product portfolio and infection control capabilities are believed to be responsible for the greater share captured by this region.

In addition, increasing efforts by the established companies to widen their presence across this region is responsible for the dominant share of captured by North America. For instance, In January 2017, Advanced Sterilization Products launched STERRAD 100NX System with ALLClear in the U.S and is planning to expand its footprint into regions such as Europe, Africa and Middle East.

The Asia Pacific market is expected to exhibit the fastest CAGR throughout the forecast period owing to the growing presence of outsourcing organizations, growing healthcare expenditure, and unprecedented evolution of the healthcare standards & infrastructure across this region. Presence of various voluntary and government organizations focused on improving infection control standards is also one of the significant factors contributing toward the growth of Asia Pacific region.

The competition is marked by extensive implementation of collaborative strategies by major companies such as Advanced Sterilization Products, STERUS Corporation, Cantel Medical Corporation, which accounts for their dominant market share. These players are highly focused on adopting competitive strategies such as mergers & acquisitions, new product development initiatives, and geographical expansion.

For instance, in March 2017, 3M and Kimberly-Clark Health Care signed an alliance to co-develop and deliver surgical and infection prevention solutions utilizing their respective expertise. The details of the deal were not disclosed but are expected to be implemented by the end of 2017.

This report forecasts revenue growth at global, regional & country levels and provides an analysis on the industry trends in each of the sub-segments from 2014 to 2025. For the purpose of this study, Grand View Research has segmented the global infection control market; on the basis of type, end use, and region: