The global influenza diagnostics market size was valued at USD 1.91 billion in 2015 and is anticipated to witness a CAGR of 6.4% during the forecast period. Influenza, which is commonly called the flu is an infectious disease of the upper respiratory system caused by the influenza virus. The seasonal influenza virus has three types, namely influenza B, influenza A, and influenza C that are differentiated on the basis of two major surface proteins namely, hemagglutinin (HA) and neuraminidase (NA). Various serotypes are seen based on differences in these surface proteins that determine the antibody response to the viruses. 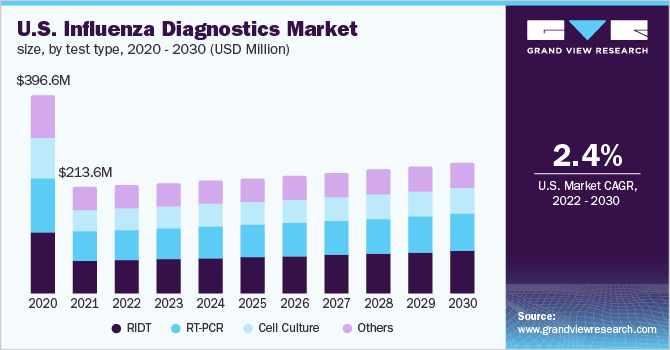 Since influenza is highly a contagious and communicable disease, transmission of the disease can easily occur at public places by infected patients who serve as carriers of the disease. The disease burden varies from region to region with temperate climate regions facing season influenza breakouts. The management and treatment of the disease is challenging in tropical regions where influenza occurs throughout the year thus causing constant breakouts.

High risk individuals for influenza consist of pregnant women, children, elderly population, immunosuppressed patients that suffer from chronic medical conditions, and healthcare workers. The treatment of influenza consists of various antiviral drugs that aid in the reduction of complications and fatalities such as death. Antiviral drugs used conventionally are ineffective in most patients owing to drug resistivity. Thus, the development of vaccines and drugs has been garnering demand aiding developers in the industry.

Rising geriatric population, growing government initiatives to counter influenza, increasing prevalence of chronic diseases such as diabetes, heart and blood disorders, and emergence of technologically advanced influenza diagnostic tests are some of the key factors propelling the growth of the influenza diagnostics market. Geriatric population are susceptible to a wide range of diseases as they are immunologically weak to fight disease therefore they are at a high risk of contracting influenza. Immunosuppressed individuals such as those suffering from a chronic disease are also susceptible to the disease. Thus, with an increasing number of individuals being susceptible to the disease, the demand for influenza diagnostics products has been rising fueling market growth.

According to data from Centers for Disease Control and Prevention, about 85 laboratory confirmed pediatric deaths were seen in District of Columbia, Puerto Rico, and 33 other states. The mortality for U.S. due to influenza was 4,605 in the year 2016 indicating 1.4 deaths per 100,000 individuals. Despite influenza being easily treatable, there are cases where adequate care and diagnosis plays a vital role in the treatment of the disease. Timely diagnosis and appropriate treatment are key in eradicating the epidemic disease globally.

Vaccination is a major way of immunizing individuals against the infectious disease to avoid serious complications, especially in immunosuppressed patients who serve as high risk individuals. Mutation of the virus serotype proves to be a major hindrance as vaccination in such cases becomes difficult putting the individual at risk of contracting the virus. Thus, with changes in virus type, it is crucial to detect its presence in patients and administer timely medication in order to prevent fatalities. Thus, the demand for influenza diagnostics products has been rising accelerating the market growth for the same.

The second largest share based on test type was held by others. This is due to the accuracy and precision offered by immunofluorescence and serology. Immunofluorescence is a method that involves immunofluorescent staining the respiratory specimens. Serological diagnosis of influenza virus includes tests such as hemagglutination inhibition tests and complement fixation. Automated serology employs the use of enzyme-linked immunosorbent assay. Thus, with the negation of false positives by these tests, they are being preferred by medical personnel accelerating their market growth.

Cell culture is generally considered as a reference method and is widely employed when the prevalence rate of the disease is being tested. Cell culture provides accurate statistics along with the capability to accurately distinguish between the types of influenza viruses. These tests are mostly performed in laboratories and its results could take days, generally ranging from 3 to 10 days, depending on the conditions. The diagnostic method provides PPV or NPV known as positive predictive value and negative predictive value, respectively. In recent times, cell culture-derived influenza vaccines are being produced to address the need for improved methods for protection against influenza.

RT-PCR is anticipated to have the second highest CAGR in influenza diagnostics. RT-PCRs deliver results in a reasonable time, which ranges from approximately 20 minutes to less than 2 hours. These tests have the ability to detect both viable and nonviable influenza virus. The RT-PCR market is driven by the fact that these tests are potentially powerful tests and can determine the influenza virus type (A and B viruses) and the chance for negative or false-positive results are very low. The drawback of RT-PCR is that it is expensive as compared to other influenza tests and some tests are yet to receive U.S. FDA approval.

POCTs is expected to be the fastest growing segment owing to the factors such as ease of use and usage by anyone and not requiring much expertise, except basic operational knowledge. With the advent of technologically advanced POCT, the reliance of the public and physicians on these tests has significantly increased. On the other hand, the laboratory influenza diagnostic market is expected to grow at a steady CAGR during the study period.

Hospitals are also referred to as long-term care facilities. Long-term care facilities are the primary end-use segment as most people rely on them for diagnosing influenza. In underdeveloped and developing countries, that lack access to rapid diagnostic tests, hospitals serve as the primary testing facilities. Therefore, their share is the highest in 2015, but is expected to gradually go down with the advent of POCT.

POCT is performed in non-laboratory settings. It is also known as bedside testing. Most RIDTs that are CLIA waived, are used in point-of-care (POC) settings. POCT is responsible in the rise in usage of influenza diagnostic testing kits. New technological advancements in the POC test kits with shorter turnaround times and error-free results are expected to boost the market further in the upcoming future. The POCT market is expected to be the fastest growing segment in the study period.

Laboratory Diagnosis of Influenza mostly employs Real-time RT-PCR technique. Laboratories have several advantages, they provide fast results (approximately 3-4 hours); are highly sensitive, specific, scalable, cost-efficient; and facilitate the testing of many sample types. The laboratories segment is anticipated to witness slow growth as compared to POCT and hospitals, because their usage is limited.

The influenza diagnostics market is analyzed for North America, Europe, Latin America, Asia Pacific, and MEA in this particular study. North America held the highest market share in the influenza diagnostics market, owing to a strong focus of the U.S. CDC on controlling the disease rates. In addition, high technological advancements in the region coupled by increasing healthcare spending are expected to drive the growth of the market. Asia Pacific region is expected to be the region exhibiting the fastest growth due to factors such as high population density and significant disease burden in the region.

The U.S. CDC actively takes preventive measures and tracks the disease through its national Influenza Surveillance System, to determine the severity of the disease and keep the disease rates in check. Apart from that, the huge availability of rapid diagnostic tests (RDTs) has boosted adoption rates in the United States. High public awareness coupled with availability of a wide range of diagnostic procedures is responsible for North America being the regional leader in terms of market share in 2015.

The Asia Pacific region is expected to witness fast-paced growth during the forecast period. The adoption of new technology and increasing awareness among the people are expected to be the factors catapulting market growth. One of the major concerning factors about influenza in Asia is the human infection with avian influenza A (H5NI) that resulted in an influenza pandemic. There is growing concern and the countries are actively involved in taking preventive measures to counter the incidence of the disease. For instance, U.S. CDC has reached cooperative agreement with South-East Asian Region (SEAR) to fund nonresearched-related bilateral influenza as a measure to be respond to avian, seasonal, and pandemic influenza.

Some of the key players in the influenza diagnostic market consist of Roche Diagnostics, Becton, Dickinson and Company, Thermo Fisher Scientific, Alere, and Quidel Corporation among others. The companies are constantly focused on the development of devices that are cost-effective and are technologically advanced to initiate effective treatment. For instance, in October 2014, Alere announced its contract with the U.S. Department of Health and Human Services Biomedical Research, known as the Biomedical Advanced Research and Development Authority (BARDA), to develop diagnostic countermeasures for influenza virus.

Similarly, in 2016, Roche received FDA clearance and CLIA waiver for the cobas Influenza A/B & RSV test. The test is meant to be used with the cobas Liat System. This test helps in molecular testing of flu A/B and strep A as well as RSV, making Roche the first manufacturer to widen the application of the test.

This report forecasts revenue growth at global, regional & country levels and provides an analysis of the industry trends in each of the sub-segments from 2013 to 2024. For the purpose of this study, Grand View Research has segmented the global influenza diagnostics market report on the basis of test type, end-use, and region: