The global intracranial aneurysm market size was valued at USD 979.85 million in 2019 and is anticipated to expand at a CAGR of 8.8% over the forecast period. An increasing number of patients suffering from the cerebrovascular disorder and rising adoption of minimally invasive intracranial aneurysms procedures are expected to drive the market in the coming years. 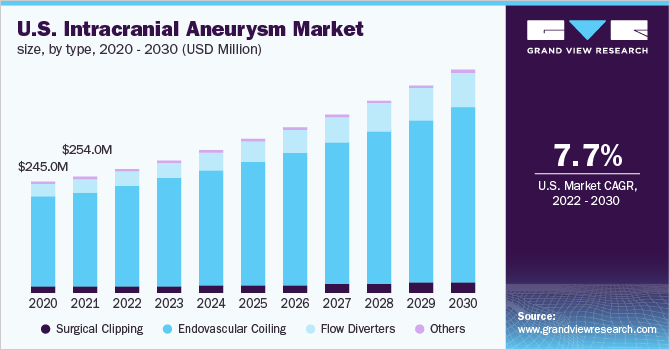 Increasing number of patients suffering from hypertension and trauma or injury to blood vessels is another factor driving the overall brain aneurysm treatment market. Hypertension is mainly caused due to high blood pressure, which significantly increases the risk of brain, heart, kidney, and other diseases. For instance, according to WHO facts 2019, around 1.13 billion people worldwide have hypertension.

Increasing incidence of intracranial aneurysm in some of the developed and developing countries has driven the launch of technologically advanced products in the market. Endovascular coiling, surgical clipping, and flow diverters are some of the notable treatment modalities used for treating an intracranial aneurysm. Some of the key players operating in this market are DePuy Synthes, Microport Scientific Corporation, Medtronic, B. Braun Melsungen AG, and Adeor medical AG. Market players are taking constant efforts to introduce technologically advanced products in the market.

The surgical clipping segment is expected to witness the highest growth during the forecast period. Despite being a traditional method of treatment, surgical clips have observed an increase in the adoption rate, especially in developing countries, mainly due to the low cost of the device. Additionally, surgical clips provide a greater chance of survival in the long term as compared to embolization coils, which have a higher risk of rupture/bleeding in the long term.

Hospitals dominated the cerebral aneurysm market in 2019 and is expected to witness the highest growth during the forecast period. This is attributed to the use of technologically advanced equipment in operation theaters and intensive care units (ICUs), increasing number of hospitals worldwide, and rising government funding to the hospitals. 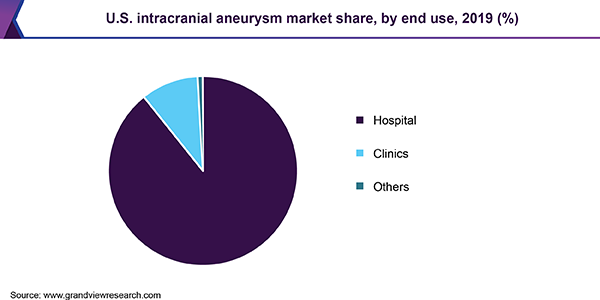 In addition, intracranial aneurysm procedures are among the most critical and complicated surgeries that are dependent on high quality and durable equipment found in hospitals. Hospitals are also better equipped to handle any post-operative complications and they include facilities for physical rehabilitation post surgeries. Thus, these factors are significantly boosting the market growth.

North America dominated the brain aneurysm treatment market in 2019 owing to the presence of well-established healthcare facilities, growing aging population, and a high incidence of hypertension and stroke. Furthermore, increase in the prevalence of intracranial aneurysm and rise in the demand for minimally invasive procedures are contributing to the market growth in the region.

Asia Pacific is expected to expand at the highest CAGR during the forecast period due to growing aging population, various lifestyle stress, rising incidence of hypertension, large population, improvement in the quality of diagnosis, and increasing patient affordability. All the above-mentioned factors have together resulted in a significant number of intracranial aneurysm procedures in Asia Pacific. Moreover, lucrative growth opportunities in developing countries, such as Japan, India, and China, are likely to contribute to the regional brain aneurysm market growth.

Major players in the industry include Medtronic; Microport Scientific Corporation; B. Braun; Stryker; Johnson and Johnson Services Inc.; Microvention Inc.; and Codman Neuro (Integra Lifesciences). Key players in the market for intracranial aneurysms are focusing on the introduction of innovative medical devices, growth strategies, and technological advancements. For instance, in 2019, Medtronic received the U.S. FDA approval for Pipeline Flex Embolization Device used for the treatment of giant or wide-necked intracranial aneurysms (IAs). These advancements are anticipated to boost the cerebral aneurysm market growth over the forecast period.

This report forecasts revenue growth and provides an analysis of the latest industry trends and opportunities in each of the sub-segments from 2016 to 2027. For the purpose of this study, Grand View Research has segmented the global intracranial aneurysm market report on the basis of type, end use, and region:

How big is the intracranial aneurysm market?

What is the intracranial aneurysm market growth?

Which segment accounted for the largest intracranial aneurysm market share?

b. North America dominated the intracranial aneurysm market with a share of 27.4% in 2019. This is attributable to the increasing cost of treatment, rising aging population, and a greater incidence of hypertension and stroke in the region.

Who are the key players in the intracranial aneurysm market?

What are the factors driving the intracranial aneurysm market?

b. Key factors that are driving the intracranial aneurysm market growth include the increasing prevalence of hypertension and aneurysm among the aging adult population as well as technologically advanced products by key players.