The global intracranial stents total addressable market size was valued at USD 2.7 billion in 2021 and is estimated to expand at a compound annual growth rate (CAGR) of 4.8% from 2022 to 2030. Growing prevalence of intracranial disorders, product developments, diagnostic rates, clinical trials, and supportive initiatives are some of the key drivers of this market. As per a study published in September 2020 in Frontiers in Neurology Journal, annual national incidence for IIH was found to be 1.15 out of 100,000 in the U.S. As per another study published in August 2020 in the same journal, the incidence of IIH was found to be similar in the Middle Eastern countries, such as Kuwait, and other regions, but was higher compared to Western regions. It was estimated at about 2 per 100,000. 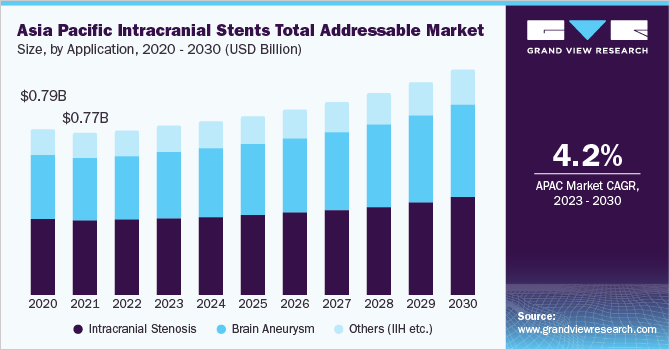 The COVID-19 pandemic led to the reduced number of elective surgeries, supply chain hurdles, operational challenges, and other adverse impacts on the market for intracranial stents. Stryker, for example, reported a 3.6% decline in sales, while net earnings decreased by 23.2%. Despite the challenges posed by the pandemic, the company significantly strengthened its development capabilities, product and service lines, and market reach through the acquisition of Wright Medical in November 2020. Medtronic’s net sales of neurovascular were driven by the constant growth of Ischemic stroke products and modest growth in hemorrhagic stroke products. Hemorrhagic stroke saw continuous growth, mainly with the Pipeline Flex flow diversion system, partly offset by decline in fourth-quarter owing to procedural suspensions caused by the pandemic.

Increasing intracranial disease prevalence is a key driver contributing to the growth of the market for intracranial stents. As per a study published in the Journal of Neurology, Neurosurgery and Psychiatry, Chinese were found to be more vulnerable to ICAS than Caucasians, with an earlier age of onset. ICAS represents the most advanced stage of ICAD and is a common cause of Transient Ischemic Attack (TIA) and ischemic stroke. As per the Brain Aneurysm Foundation, about 1 out of 50 individuals has an unruptured brain aneurysm in the U.S. The condition affects women more than men and is particularly prevalent in older people aged 55 years and above. Ruptured brain aneurysms are estimated to be responsible for 3% to 5% of all new stroke cases.

The gradual recovery in the number of elective surgeries to pre-COVID numbers are anticipated to contribute to market growth. Supportive guidelines have been released by key healthcare organizations such as the American Society of Anesthesiologists (ASA), American Hospital Association, American College of Surgeons, and others for smooth resumption of elective surgery. Benefits associated with minimally invasive surgeries also contribute to increased preference for intracranial stents over open surgeries thus fueling the growth of the market for intracranial stents. These benefits include reduced pain and scarring, smaller incisions, and faster recovery times.

The intracranial stenosis segment dominated the market for intracranial stents and accounted for a revenue share of 40.0% in 2021. It comprises stenosis caused by Intracranial Atherosclerotic Stroke (ICAS) and Intracranial Atherosclerotic Disease (ICAD). Increasing initiatives by key market players and rising disease prevalence are estimated to fuel segment growth in the near future. The Wingspan Stent System with Gateway PTA Balloon Catheter from Stryker, for example, is intended for ICAD. It is authorized under a Humanitarian Device Exemption (HDE).

The brain aneurysm segment, on the other hand, is estimated to grow at the fastest rate of over 5.0% over the forecast period. As per National Health Service in the UK, surgery can be used to treat ruptured brain aneurysms. Preventative surgery may be recommended if there is a high risk of rupture. Stents may be used as part of endovascular coiling procedure to hold the coils in place within the aneurysm, especially if the aneurysm has a wide neck.

The self-expanding stents segment dominated the market for intracranial stents and accounted for the largest revenue share of over 35.0% in 2021. The others segment is expected to witness the fastest CAGR over the forecast period. The others segment includes balloon-expanding and other stents, and venous sinus stents. Growing geriatric population, increasing incidence of intracranial disorders and introduction of innovative products will drive segment growth.

In May 2019, Stryker’s Neuroform Atlas stent received premarket approval from the U.S. FDA. It comprises a self-expanding stent intended for use with detachable metal embolization coils. The APOLLO Intracranial Stent System from MicroPort Scientific Corporation is intended specifically for improving cerebral artery lumen diameter in patients with atherosclerosis in intracranial vessels. This stent system comprises a balloon-expandable stent. Product advancements and initiatives by market players is expected to drive the market for intracranial stents.

By end user, the hospitals segment held the largest revenue share of over 40.0% in 2021. This is owing to higher number of surgeries performed within hospitals, high adoption of technologically advanced equipment, and the increasing number of hospitals worldwide. According to an article published by American Hospital Association, the number of hospitals has increased from 6,146 in 2018 to 6,210 in 2019 in the U.S. 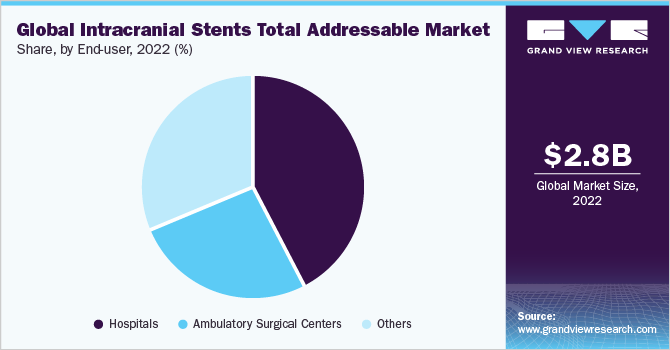 The others segment mainly includes medical or research institutes and specialty centers. It is estimated to grow at the fastest rate in the coming years. In March 2020, Sree Chitra Tirunal Institute for Medical Sciences and Technology in India developed an intracranial flow diverter stent for treating brain aneurysms. Such initiatives are expected to propel segment growth.

Asia Pacific dominated the market for intracranial stents and accounted for the largest revenue share of over 25.0% in 2021. This can be attributed to factors such as the growing aging population, negative lifestyle choices and stress, rising incidence of idiopathic intracranial hypertension, large population, and increasing disposable income. Moreover, lucrative growth opportunities in developing economies, such as India and China, are likely to contribute to regional market growth. In North America, the market for intracranial stents is projected to grow at the fastest rate of more than 6.0% over the forecast period. This is attributable to the presence of key players, rising R&D activities, and advanced healthcare infrastructure in the U.S. and Canada.

With an increase in elderly population, the market for intracranial stents is expected to show a higher growth rate, as the aging population is at greater risk of chronic illness. According to an NCBI publication, the prevalence of cerebral aneurysm in 2020 was approximately 3.2%, with a mean age of 50 years and an overall 1:1 gender ratio. Stent coils can help fill aneurysms, block them from circulation, and thus stabilize the artery. Hence, the notable prevalence of brain aneurysm is anticipated to help the market to grow in the near future.

The market for intracranial stents is competitive in nature. Large, multinational companies such as Stryker and Medtronic hold a notable share of the market. Other companies focus of their key markets in terms of geography and product lines. Market players also deploy strategic initiatives, such as product R&D, conducting clinical studies, expansion of distribution network, and partnerships to increase market presence. Medtronic holds a significant share of the market. This is attributable to a wide geographical presence, strategic initiatives such as R&D, and a diversified portfolio.

Medtronic is a significant player in flow diversion technology for aneurysm treatment owing to its extensively researched Pipeline Flex Embolization Device. MicroPort Scientific Corporation is the market leader in the treatment of intracranial stenosis in China owing to a robust portfolio comprising of APOLLO Intracranial Stent System, WILLIS Intracranial Stent Graft System, and Tubridge Flow-diverting Stent. Apollo for instance, accounts for over 65% of the domestic market. Some of the prominent players in the intracranial stents total addressable market include:

This report forecasts revenue growth at global, regional, and country levels and provides an analysis of the latest industry trends in each of the sub-segments from 2017 to 2030. For the purpose of this study, Grand View Research has segmented the global intracranial stents total addressable market report on the basis of application, product, end user, and region:

How big is the intracranial stents total addressable market?

b. The global intracranial stents total addressable market size was estimated at USD 2.7 billion in 2021 and is expected to reach USD 2.81 billion in 2022.

What is the intracranial stents total addressable market growth?

b. Asia Pacific held the dominant share of over 25% of the intracranial stents total addressable market in 2021. This can be attributed to factors such as the growing aging population, negative lifestyle choices & stress, rising incidence of idiopathic intracranial hypertension, large population, and increasing disposable income.

Who are the key players in the intracranial stents total addressable market?

What are the factors driving the intracranial stents total addressable market?