The global intravascular warming systems market size was valued at USD 254.6 million in 2015 and is projected to grow at a CAGR of 8.4% over the forecast period. An increasing number of surgical procedures is one of the major drivers expected to propel market growth. According to OMICS International Conference, 2015, approximately 234 million surgical procedures are performed annually on a global scale. Procedures such as cardiac surgery require constant maintenance of a patient’s normal body temperature. Hence, there is a need for blood warming devices, which helps warm the blood infused in a patient’s body. Other factors such as the rising prevalence of cancer and cardiovascular disorders contribute significantly to the growth of the market.

The introduction of technologically advanced products, such as portable and battery-powered warming devices, is expected to boost the market growth. The major manufacturers are developing portable intravascular warming devices, which can be used remotely as well. For instance, Estill Medical Technologies, Inc. has manufactured Thermal Angel Blood and IV Fluid Infusion Warmer, a portable, battery-powered device that aims at the uninterrupted movement of patients in hospitals from one department to another. 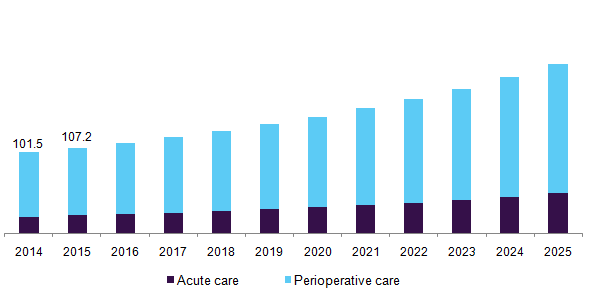 On the other hand, the acute care segment is expected to grow at the fastest rate during the forecast period. This is due to the growing incidence of trauma cases and accidents worldwide. For instance, according to the CDC, around 31.0 million people annually visit the emergency department for accidental or unintentional injuries in the U.S.

On the basis of end use, the market is segmented into operating rooms, ICUs, emergency rooms, and others. The operating rooms segment was the largest segment of this market in 2015 and is expected to maintain its dominance throughout the forecast period. High usage of intravascular warming systems for pre-, intra-, and postoperative care in cancer, cardiac, and other diseases accounted for the growth of this segment. In addition, the rising adoption of advanced medical devices fuels the demand for intravascular warming systems.

The emergency rooms segment is expected to grow at the fastest rate during the forecast period. The key factor that can be attributed to the growth of this segment is the increasing adoption of intravascular warming systems for the treatment of accident and trauma patients. 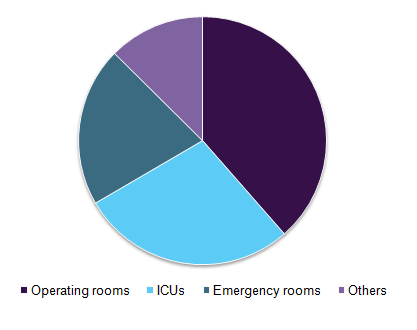 In 2015, North America dominated the overall intravascular warming systems market followed by Europe. The government of the U.S. is undertaking significant investment initiatives to develop healthcare infrastructure and services of hospitals. For instance, according to the CDC, hospitals accounted for 32.1% of the total national health expenditure in 2014. High investment in the development of hospitals in the U.S. is directed toward the overall well-being of patients, which is further anticipated to result in a positive impact on the growth of the market in the near future.

Asia Pacific is expected to grow at the highest rate during the forecast period due to an increase in surgical procedures in this region. According to the National Health Mission, there was a 10-fold rise in the number of surgeries in India between 2009-2010 and 2014-2015. They also stated that there is a 979% increase in major surgeries in Maharashtra, 470% in Karnataka, 400% in Bihar, and 258% in Jammu & Kashmir. In addition, increasing geriatric population coupled with rapidly evolving healthcare infrastructure in the Asian countries, such as China and India, is anticipated to propel the market.

Some of the key players in the market are 3M; The 37 Company; Stryker Corp.; Smiths Medical, Inc.; Inditherm Plc.; Geratherm Medical AG; Becton, Dickinson and Company; and Estill Medical Technologies, Inc. The companies are majorly focused on launching new products to strengthen their position in this sector. For instance, in April 2014, Inditherm received approval for its patient warming products by South Korean medical device authorities.

The major companies are undertaking several organic as well as inorganic strategies, such as collaborations, product portfolio expansion, mergers & acquisitions, and regional expansions, for serving the unmet needs of their customers. For instance, in March 2015, BD acquired CareFusion Corp with an aim to expand its medication and procedural solutions portfolio.

This report forecasts revenue growth at global, regional & country levels and provides an analysis of the latest trends and opportunities in each of the sub-segments from 2014 to 2025. For the purpose of this study, Grand View Research has segmented the global intravascular warming systems market on the basis of application, end use, and region: