The global intravenous immunoglobulin market size was estimated at USD 9.09 billion in 2016 and is anticipated to grow at a CAGR of 7.1% over the forecast period. Growing geriatric population, rising prevalence of immunodeficiency diseases, increasing adoption of IVIG treatments, and rising use of off-label indications are the key drivers of the market. Rising number of patients with immunodeficiency disorders is the primary cause for the development of IVIG preparations. 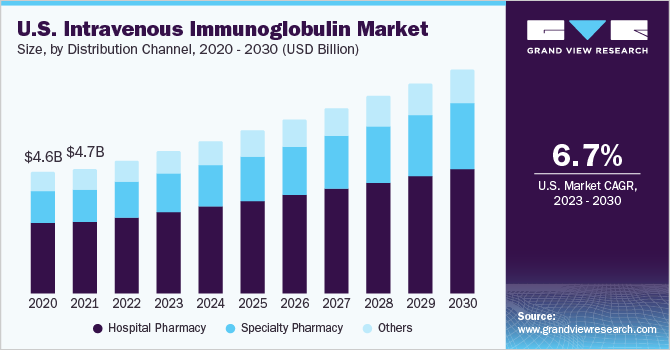 According to the W.H.O, currently, there are over 50 different Primary Immune Deficiency (PID’s) such as specific antibody deficiency, X-lined hypo-gamma-globulinemia, and others. PIDs include 176 different types of rare hereditary disorders. According to the U.S. National Library of Medicine and National Institute of Health, approximately 6 million patients are suffering from PID worldwide. Growing incidences of these diseases are expected to boost the demand for immunoglobulin therapies over the forecast period.

The demand for IVIG therapies for the treatment of acquired and primary immunodeficiency diseases is increasing as it is the most effective & the only available treatment option. Moreover, sedentary lifestyle habits, including consumption of saturated fats salt, & sugars, less physical activities, and high alcohol consumption have led to an increase in the prevalence of these diseases. Rising prevalence of lifestyle-associated disorders such as obesity & antibody deficiency disorders are the factors expected to drive the growth.

The global geriatric population base is on a rise. According to a report published by the United States Census Bureau, the number of people aged 65 and older in the U.S. was approximately 46.2 million in 2014 and is expected to reach over 98 million by 2060. Aging also weakens immune systems and consequently heightens a patient’s susceptibility towards acquiring infectious diseases. The global base of geriatric population is expected to grow over the next few years is expected to serve this industry as a high impact rendering driver.

Hypogammaglobulinemia dominated the application segment at 21.1% in 2014. This can be attributed to the owing to increasing incidences of primary immunodeficiency diseases (PID) worldwide. It is the most common chronic immune defect in patients with lymphoproliferative disorders (LPDs). As per the CDC in 2012, the incidence rate of hypogammaglobulinemia across the globe was around 2 per 100,000 populations every year and is expected to rise in the near future. Increasing incidence of immunodeficiency disorders coupled with the high adoption of IVIG therapies is expected to drive the segment growth in the near future.

Chronic Inflammatory demyelinating polyneuropathy (CIDP) segment held the second-largest share of the IVIG market on the basis of application. It is usually found in patients with diabetes mellitus. The treatment of CIPD involves the use of immunosuppressive drugs, steroids, and plasmapheresis. IVIG is an effective and long-lasting alternative to these methods. The associated benefits such as safety, minimally invasive and user-friendly treatment option are the factors contributing towards the development of the industry.

Moreover, increasing number of intravenous product approvals and clinical trials for new clinical applications is anticipated to provide potential growth opportunities for the industry. Increasing healthcare expenditure and growing awareness pertaining to autoimmune diseases are also anticipated to further facilitate the growth of this segment. 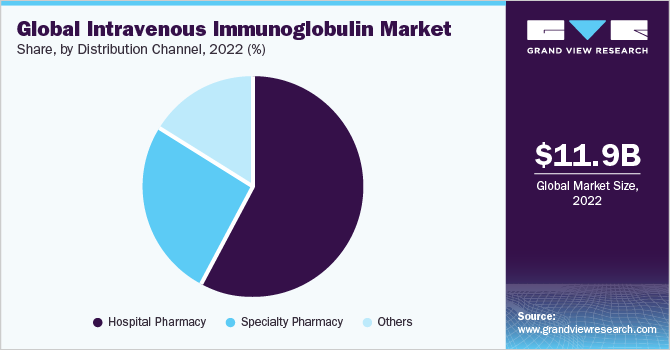 The segment growth is also driven by key contributing factors such as increasing usage and preference of subcutaneous immunoglobulin in home based self-infusion immunotherapy. The extensive product pipeline of subcutaneously administered IVIGs is anticipated to further contribute towards the growth of this segment.

North America dominated the overall market in terms of revenue in 2014 at 47.7%. Increasing level of awareness pertaining to products involved in the treatment of immunodeficiency diseases, rising inclination of clinicians towards these therapies, and growing healthcare expenditure are the key factors contributing towards the market growth.

Changing lifestyle and rising geriatric population prone to chronic diseases are some of the factors contributing to the growth of this industry. In addition, increasing incidences of PID is expected to present this market with future growth opportunities. According to the American Autoimmune Related Disease Association Inc. (AARDA), near about 50 million Americans were suffered from autoimmune diseases in the year 2012 and the number is expected to grow over the forecast period.

Asia Pacific is anticipated to exhibit lucrative growth over the forecast period as a consequence of increasing awareness and potential opportunities for adoption of immunoglobulin based therapies for the treatment of primary immune deficiencies coupled with growing geriatric population.

Other factors contributing to the development of this business are emerging economies, growing healthcare spending, and rapidly growing immunoglobulin market. In addition, rising incidences of immune disorders, awareness levels pertaining to intravenous & subcutaneous immunoglobulin therapies, and improving healthcare facilities is anticipating further growth in the near future.

Market leaders are involved in extensive R&D for the development of cost-effective and sensitive immunoglobulin therapies with lesser side effects. For instance, In January 2015, Grifols SA’s purification plant received FDA approval for the production of intravenous immunoglobulin (IVIG) 10%, plasma protein marketed under brands Gamunex and Flebogamma, thereby expanding its product portfolio and gaining more market share.

This industry is experiencing a significant boost owing to growing number of FDA approvals. Owing to this a number of local and international players are investing in the IVIG business.

Market players are adopting various strategies such as mergers and acquisitions, distribution, and other collaborative agreements to gain a greater share by increasing their market penetration. For instance, in September 2015, China Biologics entered into a collaboration agreement with Xinjiang Deyuan Bioengineering Co., Ltd to source raw material required for the production of IVIG products and human albumin thereby strengthening its operational capabilities.

This report forecasts revenue growth at global, regional, & country levels and provides an analysis of the industry trends in each of the sub-segments from 2012 to 2022. For the purpose of this study, Grand View Research has segmented the global intravenous immunoglobulin market report on the basis of application, route of administration, and region: