The global irritable bowel syndrome treatment market size was valued at USD 1.5 billion in 2018 and is anticipated to exhibit a CAGR of 10.1% over the forecast period. Rising prevalence of target disease, coupled with increasing uptake of drugs for the same, is driving the market.

Furthermore, rising commercialization of existing products in different regions is expected to accelerate growth over the forecast period. Increasing adoption of Linzess in the U.S., Europe, and Japan has been significantly contributing to revenue growth. Linzess was approved in China in January 2019, which is further expected to give the market a boost. 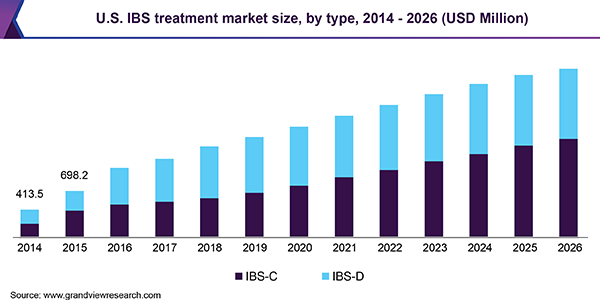 The market mostly remains underserved, with a considerable number of opportunities for pharmaceutical companies to address several unmet needs in this therapy area. There are a few promising products currently under clinical trials, which can further accelerate growth. Product sales are projected to grow significantly over the forecast period, mainly due to increasing prevalent population and commercialization of novel drugs to treat Constipation-predominant irritable bowel syndrome (IBS).

Irritable bowel syndrome is one of the most common functional gastrointestinal disorders, with an estimated global prevalence rate of 10-15%. According to the International Foundation for Gastrointestinal Disorders (IFFGD) in 2016, it was estimated that IBS affects around 25-45 million in the U.S. About 2 in 3 IBS patients are female and most people with this condition are under the age of 50.

The exact cause of symptoms is unknown and symptoms may result from a disturbance in the way the brain, nervous system, and gut interact. This can lead to changes in normal bowel sensation and movement. According to a survey by IFFGD, approximately 2,000 patients with IBS reported that diagnosis of their conditions was typically made 6.6 years after their symptoms began.

Approximately 20-40% of all patient visits to gastroenterologists are due to symptoms of irritable bowel syndrome. Yet numerous people remain unaware and undiagnosed that their symptoms indicate a medically recognized disorder. As a result of this, numerous awareness campaigns are being organized to raise awareness about the condition.

For instance, The IBS Network in the U.K. ran several activities throughout April in 2018, to overcome the stigma surrounding the illness. The campaign was targeted at people living with IBS and physicians who work to help those fighting the symptoms. These campaigns and initiatives are expected to raise awareness about the disorder and encourage patients to seek treatment for their conditions. This, in turn, is expected to accelerate IBS treatment market growth.

The market is segmented on the basis of type into Diarrhea-predominant (IBS-D) and Constipation-predominant (IBS-C). IBS-C was the largest revenue generating segment in 2018 owing to the factors such as increasing prevalence and rising uptake of drugs such as Linzess/Constella and Amitiza.

Furthermore, the segment is estimated to exhibit the fastest growth rate in the irritable bowel syndrome (IBS) treatment market over the forecast period due to the expected launch of promising products such as SYN-010 and Tenapanor, which are currently under clinical trials. Allergan, Ironwood, Astellas, and AstraZeneca are some of the major players operating in this segment.

Leading products developed for the treatment of symptoms of irritable bowel syndrome includeXifaxan, Linzess/Constella, Viberzi, and Amitiza. Linzess/Constella (Linaclotide) was estimated to be the largest revenue generating product segment in 2018 owing to factors such as rising adoption of the product in major regions such as the U.S., U.K., Germany, Spain, Italy, and Japan. Furthermore, Linzess witnessed a significant growth rate in Japan in 2018. 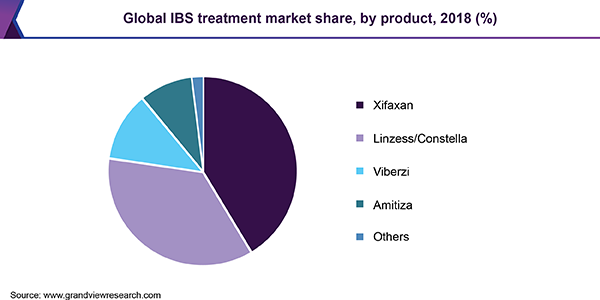 The Linzess/Constella segment is estimated to register the fastest growth over the course of the forecast period. Linaclotide is marketed by Ironwood and Allergan in U.S. as Linzess and is marketed by Allergan in Europe under the brand name Constella. In Japan and China, Astellas and AstraZeneca have the exclusive rights to develop and market linaclotide as Linzess respectively.

North America was the largest revenue generating region in 2018 and is expected to exhibit the same trend over the forecast period. The region held the dominant share due to the presence of key market players, a well-established healthcare infrastructure, greater patient awareness, and a strong presence of novel products.

Europe is estimated to be the fastest growing region over the forecast period due to the presence of a large target population and rising commercialization of IBS products in the region. Furthermore, increasing initiatives in the region to raise awareness about the condition is likely to accelerate market growth.

Players are also focusing on launching their products in different regions to expand their market presence. For instance, in January 2019, Ironwood Pharmaceuticals and AstraZeneca received marketing approval for Linzess in China with an aim to strengthen its position in the market.

This report forecasts revenue growth at global, regional, and country levels and provides an analysis on latest industry trends in each of the sub-segments from 2014 to 2026. For the purpose of this study, Grand View Research has segmented the global irritable bowel syndrome treatment market report based on type, product, and region: