The global kid's footwear market size was valued at USD 34.1 billion in 2018 and is estimated to expand at a CAGR of 8.2% in the forecast period. Factors such as faster physical growth of children, parent’s interest in matching footwear as per their children’s apparel, and kid’s interest in their favorite cartoon character based footwear are driving the market. Moreover, the demand for smart footwear is increasing among children due to their technical specifications of light and sound, thereby boosting the growth of the market.

An increase in the number of product innovations, along with the rise in attractive footwear easily affordable by parents according to the child’s desire, fuels the growth of the global market. Parents look for an attractive pair of shoes in the market more than the branded and durable ones as children need a pair of shoes in about every three to four months for faster physical growth. Moreover, marketing and promotional activities by the stores, along with attractive functionality such as light and sound in the baby footwear, attract a large number of consumers in the industry. 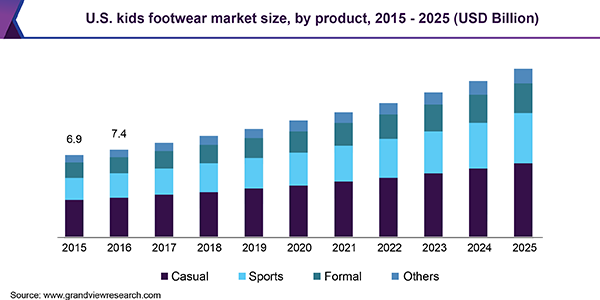 However, the need for different varieties of shoes in school for different occasions increases the sales of different styles of toddler footwear in the market. Moreover, growing lifestyle trends among the consumers, along with the adoption of different cultures such as western and regional, have contributed significantly towards the growth of the market.

The majority of the parents prefer to buy footwear made up of sturdy material, which protects their kid’s foot from injuries, thereby boosting the growth of the market. The rise in the influence of social media on the apparel industry has contributed to the sales of the industry. Moreover, the growing demand for apparel and footwear among the kids of celebrities and superstars has contributed significantly to the growth of the market.

Moreover, the use of child artists for the promotion of branded products has increased the need among children for buying such attractive products in the market. For instance, in 2017, Boots Mini Club collaborated with the British television celebrity, Fearne Cotton in the U.K. to introduce a new line of children footwear in the industry.

The above-mentioned factors have resulted in the rise in demand for branded apparel and footwear products, thereby contributing to the growth of the kid's footwear market. Shifting preferences towards baby footwear products, along with changing generation gap, have also contributed to the rise in the sales of different product types. Moreover, the adoption of the western lifestyle, along with a growing working population and disposable income, fuels market growth.

The casual product segment accounted for the largest share of 46.0% in the year 2018. Shifting consumer preferences towards fancy and trendy shoes for different occasional wearing, along with the rise in the number of product offerings by the manufacturers, are driving the segment. Companies are launching different types of designed footwear such as brogues and printed shoes to sustain in the competitive market. To meet consumer demand, some of the leading manufacturers offer customized casual footwear for children in the market. Bright Idea Design Studio, Inc., Explicit Shoes Inc, and Simply Feet are some of the major U.S. based customized footwear suppliers.

The sports product segment is expected to expand at the fastest CAGR of 9.1% from the year 2019 to 2025. Growing fitness concerns among parents towards their children due to a sedentary lifestyle and health problems have increased demand for the segment. The participation of kids in different indoor and outdoor physical activities is increasing gradually.

The boy's end-user segment accounted for the largest share of 47.2% in the year 2018. The major reason for the growth of this category is growing lifestyle trends among the consumers in the footwear industry. Moreover, increasing spending on fashion and apparel due to the rise in inclination towards athletics and sports is a key driving factor. Increasing demand for casual and formal shoes among boys is significantly contributing to the growth of the segment. However, the growing working population in developing countries has increased the spending on attractive and trendy footwear in the market. 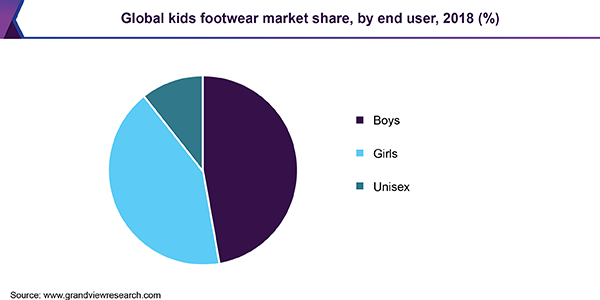 The girl's segment is the fastest-growing segment, expanding at a CAGR of 8.7% over the forecast period. It has been observed that the proportion of women athletes has motivated girls to participate in some sports. This has increased the sales of different apparel and footwear products for the girl's section in the global market. Besides, awareness about fitness among girls is considerably high in developed countries and has inevitably resulted in the sales of footwear. Moreover, the number of pair of footwear purchased by girls is increasing significantly in developing countries, which is likely to boost sales in the industry.

In terms of value, North America held the largest share of 34.4% in the year 2018. The market is driven by a rise in consumer awareness regarding athletic and sports footwear in U.S. This, in turn, is expected to increase the sales of boys' and girls' footwear in the region over the forecast period. Moreover, rising expenditure on fitness products in the U.S. is anticipated to fuel the growth of toddler footwear in the market. Moreover, the U.S. has the largest number of sports and fitness clubs, which will boost the demand for products in the next few years.

Asia Pacific is expected to expand at the highest CAGR of 9.5% over the forecast period, on account of rising consumer spending on fashion apparels in countries such as China and India. Changing consumer buying patterns for footwear products in children, along with growing disposable income especially in developing countries such as China and India, are expected to boost the growth of the market. Moreover, a shift in consumer preferences towards branded footwear for the kids, along with separate sections provided by leading players such as Nike, Puma, and Adidas in their product portfolio, has driven the sales in the market over the forecast period.

Rising demand for the baby apparel and footwear in China, India, and Japan due to the rise in spending on children has led to an increase in product innovations and market developments, thereby fueling its demand in the market. The market is identified by several strategic activities such as acquisitions, product innovations, and campaigns.

Key manufacturers in the industry include Nike, Inc.; The Children's Place; Crocs Retail, LLC; Stride Rite; New Balance; Converse; Puma SE; ASICS America Corporation; SKECHERS USA, Inc.; and Adidas AG. The growth of the market is also attributed to a rise in fashionable, trendy, and premium footwear products for children in the market.

This report forecasts revenue growth at the global, regional, and country levels and provides an analysis of the latest industry trends in each of the sub-segments from 2015 to 2025. For this study, Grand View Research has segmented the global kid's footwear market report based on the product, end-user, and region: