The global lager market size was valued at USD 366.94 billion in 2018. Rising demand for premium beer will boost the demand for a lager in the market. Moreover, consumer preferences, improving the standard of living, increasing disposable income, and changing lifestyles in developing economies, including China, India, and Mexico, are expected to fuel the product demand. Furthermore, various health benefits associated with the product such as lowering the risk of kidney stones, heart attacks, and strokes are expected to remain a favorable factor for the market growth over the next few years.

Beer is commonly produced with four basic ingredients: water, malted cereals, yeast, and hops. These ingredients then undergo a fermentation process over a certain period of time. Beers are largely categorized into two types: ale and lager. The basic difference between both types of beer is the yeast that is used for fermentation. The selection of the yeast is based on the fermentation temperature of the beer. Ales are generally fermented at moderate temperatures (20 to 22 °C), whereas fermentation of lagers takes place at cooler temperatures (7 to 13 °C). The lower temperature slowdowns yeast activity and provide the necessary maturation time. 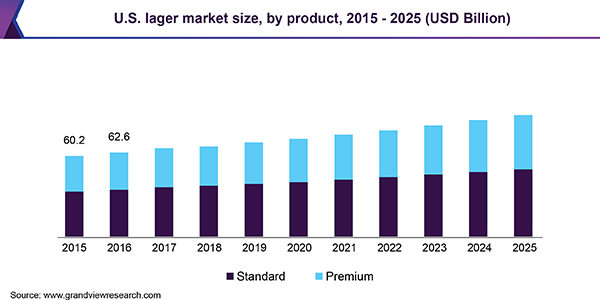 Lager is predominantly consumed in bars, restaurants, hotels, wine shops, nightclubs, supermarkets, and online retails. Furthermore, major manufacturers are introducing new flavors such as tequila, apple, cheese, blueberry, chocolate, and lemons. However, increasing penetration of available substitutes such as vodka, whiskey, rum, and gin, coupled with rising demand for other non-alcoholic substitutes, including energy drinks and carbonated drinks, is expected to have a negative impact on the market growth.

Increasing awareness regarding health benefits associated with the product will boost the market growth. Beer has a number of vitamins, proteins, and natural antioxidants with low calories, carbohydrates, and no fat or cholesterol. These nutritional properties help to prevent cardiovascular diseases and support muscle recovery. In addition, they help in improving the cholesterol level and increasing HDL in the body. According to the World Health Organization (WHO), 17.9 million die every year due to cardiovascular diseases (CVDs) globally. Increasing health issues are expected to promote the consumption of the lager over the forecast period.

Premium lager is expected to remain the fastest-growing product segment, expanding at a CAGR of 4.5% from 2019 to 2025. An increase in product consumption is due to its growing adoption in bars, restaurants, and hotels. Furthermore, demand has seen significant growth in the past owing to shifting consumer preferences for premium beer. Furthermore, improving brewing process technology, coupled with the usage of the finest quality of raw materials, has enhanced the overall characteristics of the product.

Major manufacturers are launching their products in developing countries, such as India, to gain a competitive edge in the market. For instance, in June 2018, Victory Brewing Company has introduced its standard lager beer in the Indian market. Standard lager was valued at USD 205.8 billion in 2018. The segment is expected to grow in the coming years due to shifting preferences among youth consumers from other beer forms to lager products.

The on-trade segment generated a revenue of USD 266.6 billion in 2018. This growth is attributed to increased consumption of the product through nightclubs, pubs bars, restaurants, and related places in the hospitality industry. Beer products are available in premium prices through on-trade channels as compared to off-trade counterparts. The growing hospitality industry in developed countries, such as the U.S., U.K., Germany, and France, as a result of high consumer buying power, is anticipated to have a strong impact on the growth. 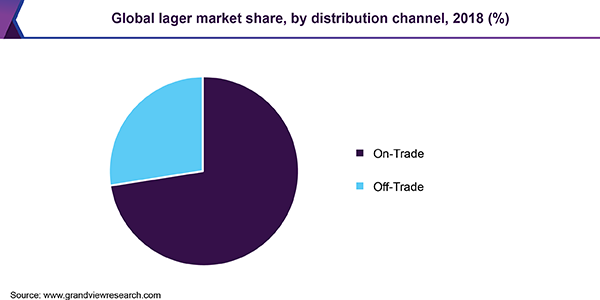 Off-trade distribution is expected to exhibit a CAGR of 4.8% from 2019 to 2025. This segment is expected to witness significant growth in developing nations on account of increasing consumer buying power. In addition, the presence of a large consumer base in countries such as India, Mexico, Brazil, and China is expected to have a strong impact on segment growth.

Europe is the largest regional market, anticipated to expand at a CAGR of 4.2% from 2019 to 2025. In Europe, flavored beer is one of the premium drinks in countries including U.K., Germany, and France. Furthermore, premium products including lager are attracting new consumers such as millennials and female drinkers in the above-mentioned countries.

Asia Pacific is expected to expand at a CAGR of 5.0% from 2019 to 2025. Many players are launching new products in developing countries, such as India and China, in order to cater to the increasing consumer demand. For instance, in November 2018, De Brabandere Brewery has launched a premium beer ‘hopper’ in collaboration with Brindco, one of the prominent importers of alcoholic beverages. The product is offered in two variants: Blonde and Witbier. The product is mainly sold in retail markets, bars, pubs, and restaurants.

North America is anticipated to witness significant growth in the premium beer market owing to the increasing demand for low-calorie beer. Moreover, rising health concerns have compelled consumers to go for a light beer. Beer producers are launching new products in order to gain a competitive edge in the market. For instance, in October 2018, the U.S. based brewing company, Anheuser-Busch Companies, LLC has launched a new light lager under the brand name ‘Wild Peak’. This premium product contains 5.3g of carbohydrates and 93 calories in every 12oz can.

Major producers are expanding their geographical reach, especially in developing countries, in order to gain the maximum share in the market. Establishment of strategic partnerships with major importers and buyers of the region in order to launch new products as per the customer demand in the region will remain a critical success factor over the next few years. Taking into account the above-mentioned factors, producers are likely to focus on product innovation catering, particularly the developing countries and untapped markets to gain maximum market share.

This report forecasts revenue growth at the global, regional, and country levels and provides an analysis of the latest industry trends in each of the sub-segments from 2015 to 2025. For the purpose of this study, Grand View Research has segmented the global lager market report on the basis of product, distribution channel, and region: