The global laptop market size was valued at USD 101.67 billion in 2017. It is estimated to expand at a CAGR of 0.4% during the forecast period. In terms of volume, the market is anticipated to register a CAGR of 1.0% during the same period. Growing internet penetration, rising disposable incomes, swelling global population, and increasing awareness among consumers about emergence of novel technologies are among the primary growth stimulants for the market.

A number of consumers these days prefer cross-functional devices that offer integrated features and capabilities in the same device. This has encouraged the development of multifunctional devices. Laptops offer extensive diversity in their application areas, ranging from business and education to entertainment. Furthermore, high investments, availability of economical devices due to mass production, and a range of diverse applications are projected to provide a fillip to the market. 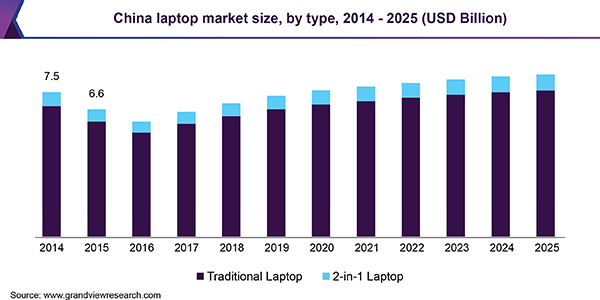 In addition, a high degree of digital convergence and continuous product innovation initiatives undertaken by key manufacturers are poised to aid in catapulting sales of the device over the forecast period. Booming e-commerce coupled with surging demand for gaming devices is likely to play a key role in bolstering the demand for the device over the coming years.

However, proliferation of smartphones is expected to make inroads in sales of laptops during the forecast period. Smartphones offer several benefits over laptops, including low price, portability, long-lasting battery life, increased storage, advanced features such as camera, GPS, mobile payments, music, location-based advertising, internet access, and smooth communication. This is prompting consumers to opt for smartphones.

By type, the market is bifurcated into traditional and 2-in-1 laptops. In 2017, the traditional laptops segment represented over 90.0% of the overall market revenue owing to its increased adoption by end users, particularly gamers. Traditional ones offer advantages such as more storage space, powerful processor, bigger screen size, and increased Random Access Memory (RAM), among others.

Meanwhile, the 2-in-1 laptop segment is estimated to post the highest CAGR exceeding 1.0% in terms of volume during the forecast period. This may be attributed to continuous innovations in design, which is leading to reduced size and easy portability. Moreover, this type integrates capabilities of a laptop and tablet into one device, offering benefits such as energy efficient processors, light weight, and increased number of ports.

15.0" to 16.9" laptops are also known as desktop replacements as they have wide-screen displays, powerful processors, enhanced storage, and are ideal for numerous end-use applications such as gaming. Besides gaming, these laptops are largely used in corporate offices as their widescreen monitors tend to be thin and can aid in clearing space-constrained office places, helping maximize productivity. Hence, the segment commanded more than half of the market revenue in 2017 and is anticipated maintain its position throughout the forecast horizon.

Furthermore, the 13" to 14.9" segment is projected to witness the highest CAGR during the same period as laptops with these screen sizes offer best balance between usability and portability. They are suitable for gaming and business applications as they have enhanced graphics card, high-resolution display, and sufficient storage. Moreover, they possess effective features such as long battery life, powerful processors, light weight, and cost-effective price. Rise in their sales is likely to support the growth of the overall laptop market.

In 2017, laptops ranging between USD 501 to USD 1000 held a substantial share in the global market. They are also poised to be the fastest growing segment during the forecast period. Array of features available at a considerably reasonable price makes them the preferred price range among consumers.

They are suitable for diverse applications such as personal, business, and gaming. They also come with a long battery life, wide display screen, robust processor, and attractive design.

Original Equipment Manufacturers (OEMs), such as Dell, HP Development Company, L.P., and Lenovo, manufacture laptops particularly for business purposes because both small and large companies nowadays require robust laptops for various tasks such as coding and programming, presentations, graphics design, and document editing. Moreover, numerous businesses either adopt a policy called Bring Your Own Device (BYOD) when it comes to hardware or still follow the standard practice of providing employees with primary devices such as laptops.

In addition, business laptops have a rugged design, wide-screen displays, superior graphics, faster processors, and enhanced connectivity options. They are reasonably priced and have a long lifespan. Owing to these factors, business types counted for the leading share in the market in 2017. 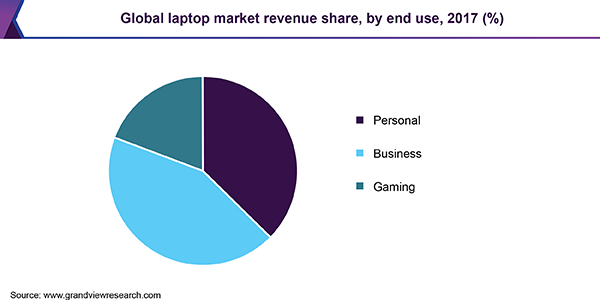 Furthermore, burgeoning popularity and high investments in gaming are leading OEMs to focus on making gaming laptops more accessible to end users by plummeting their prices, providing attractive offers, and strengthening their gaming product portfolio. Having said that, the gaming segment is expected to experience the highest CAGR during the forecast period. Rising demand for gaming laptops among youths and professional gamers is bolstering market growth. Moreover, growing popularity of augmented reality and virtual reality is estimated to play an important role in augmenting the demand for gaming types from 2018 to 2025.

In 2017, Europe and North America, together, accounted for more than 50.0% of the overall market value. However, these regions are anticipated to witness a decline in terms of revenue over the forecast period. The North America and Europe markets are mature, with most product categories at or near saturation. Lack of revolutionary technological advancements in existing products along with longer replacement cycles are some of the major factors hampering the sales of laptops in the regions.

The sales of the device in Asia Pacific is projected to rise at the highest CAGR in terms of revenue over the forecast period. Government policies aimed at reducing import duties levied on spare parts are poised to positively influence the market in this region. Moreover, increasing government initiatives such as Make in India, Made in China 2025, and Digital India, along with increased foreign direct investments in retail and e-commerce, are likely to boost laptop sales in the region.

Furthermore, Latin America and Middle East & Africa are expected to progress at a positive growth rate during the forecast period owing to rising disposable income of the populace in the region. Government policies enabling a digital economy along with improving internet infrastructure are estimated to spur the growth of the regional markets.

The market is characterized by intense competition with the presence of several giants including Dell; HP Development Company, L.P., ASUSTeK Computer Inc.; Apple Inc.; and Acer Inc. Some of the key market incumbents are making substantial investments in R&D initiatives with a view to manufacture more affordable laptops whilst keeping pace with technological advancements and developments.

Furthermore, OEMs are focusing on collaborations with various companies owing to rising need for constant product innovations and increasing competition in the market, especially during new product introduction (NPI) and promotion stages. They are also emphasizing on building efficient supply chains as a response to intensifying competition and dynamic consumer preferences.

This report forecasts revenue growth at the global, regional, and country levels and provides an analysis of the latest industry trends in each of the sub-segments from 2014 to 2025. For the purpose of this study, Grand View Research has segmented the global laptop market report on the basis of type, screen size, price, end use, and region: