The Latin America adhesives and sealants market size was valued at USD 1.6 billion in 2013 and is expected to expand at a CAGR of 7.8% over the forecast period. Demand for adhesives and sealants in Latin America has been primarily driven by Brazil, which is one of the fastest growing economies in the world. Brazil hosted the FIFA World Cup in 2014, followed by the Olympics in 2016. Organization of such large-scale international events is likely to stimulate continuous demand for the product from various end-use industries such as construction, packaging, and furniture.

Latin America is growing at a significant rate owing to ongoing developments in the construction and automotive industries. Positive economic recovery trends in the region have significantly increased the purchasing power of customers, which has favorably impacted the regional market growth. 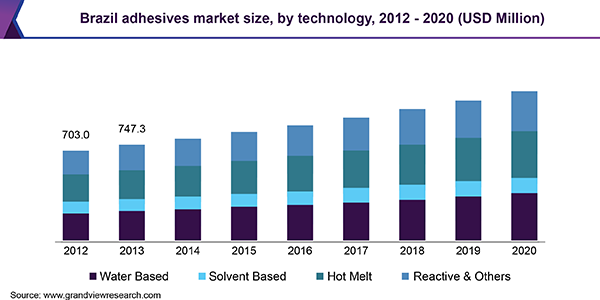 In addition, increasing demand for lightweight vehicles is an emerging trend in the regional market. Adhesives play a crucial role in assembly of automotive parts and are poised to replace mechanical fasteners over the coming years. Moreover, adhesives are easy to apply and they help make cars lighter in weight.

Major auto manufacturers are shifting their manufacturing base to Latin American countries to harness the benefits of cheap labor and flexible regulations in the region. Brazil is emerging as one of the fastest growing markets for automobiles and it was included in the top five auto markets of the world in 2015. Other Latin American countries such as Mexico and Argentina are also emerging as automobile manufacturing hubs of the West. These positive developments in the regional automotive industry is expected to provide lucrative opportunity for the market growth.

Despite growing demand for the product, volatility in raw material prices, coupled with growing environmental concerns regarding the use of petrochemical based adhesives and sealants, is expected to hinder market growth over the next few years. In order to minimize such effects, the industry has shifted its focus towards developing bio-based alternatives, which provide an environmental friendly substitute for synthetic adhesives and sealants.

Water-based technology emerged as the leading technology used in Latin America and accounted for 48.3% share of the total volume in 2013. Strong performance delivered by the product and environment friendly nature of water based adhesives and sealants are expected to drive the segment over the forecast period.

Pressure sensitive applications emerged as the leading application segment for adhesives and the segment accounted for 26.9% share of the total volume in 2013. Demand for the product is expected to increase in the furniture industry owing to increasing disposable income, mainly in Brazil and Argentina, thereby making it the most lucrative market in the region. 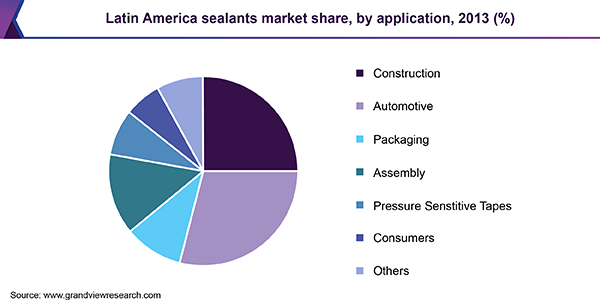 Construction dominated the sealants market and accounted for 28.1% share of the total volume in 2013. Automotive is expected to be the fastest growing application segment for sealants, expanding at an estimated CAGR of 5.9% over the forecast period. Sealants find application in industrial assembly as they offer flexibility in processing as well as improve the longevity of the assembly. Polyurethane and acrylics are the major sealant types that are used for industrial assemblies.

Brazil emerged as the leading market for both adhesives and sealants. The Brazil adhesives market is expected to reach USD 1.2 billion by 2020 and expand at an exponential CAGR over the forecast period. The market in Argentina is witnessing high demand from end-use industries such as automotive, packaging, and construction. Since last few years, Argentina has witnessed exponential growth in the adhesives sector owing to increasing demand for the light weight vehicles.

Rest of Latin America is anticipated to grow at a moderate pace over the forecast period owing to growing construction industry for modernization of transportation network and increasing availability of homes. This factor would drive the demand for adhesives in the construction industry.