The development of passenger car, commercial vehicle, and motorcycle industry, along with growing application of energy storage applications is expected to drive industry demand in the near future. Increasing requirement of UPS in industrial sectors including oil & gas, manufacturing, chemical, and healthcare has spurred industry demand. 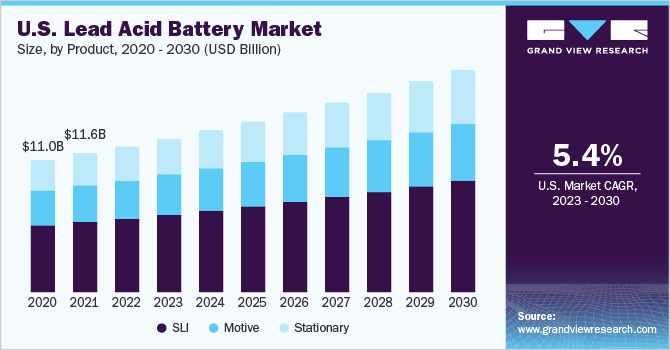 Low cost coupled with reliable performance is anticipated to drive the growth in the future. However, high lead content in the product can harm the environment and is expected to restrain growth. In addition, the low energy density of these products is anticipated to restrict growth. However, the increasing demand for alternatives such as lithium ion battery in automobiles is likely to pose challenges for growth in the future.

Development of the auto industry in India, Mexico, Indonesia, South Korea, Thailand, and Vietnam is anticipated to stimulate industry size. Growing inclination towards pollution-free electric vehicles coupled with technological developments is expected to fuel product demand over the upcoming years.

The global market is dominated by major players including Johnson Controls, GS YUASA, Exide Technologies, East Penn, and EnerSys. Johnson Controls was one of the prominent lead acid battery industry players in 2015 and accounted for over 25% of the market share.

SLI batteries contributed to 54% of the revenue in 2015 and are projected to witness below average growth owing to higher demand for other types of products including stationary and motive. Nonetheless, the segment is expected to grow on account of its demand in applications requiring high power including automotive. Increasing vehicle manufacturing, particularly in China, India, Japan, Brazil, Mexico, Germany, Italy, South Korea, and the U.S. is expected to promote expansion over the upcoming years.

Stationary batteries are anticipated to witness the highest gains over the forecast period at a CAGR of 6.4% owing to an increasing requirement for backup power in sectors such as oil & gas and railway and energy generation. Increasing consumption of energy on a global level is expected to drive the need for stationary batteries, primarily as a backup source during power failures.

Flooded batteries were the largest consumed product types generating revenues worth USD 31 billion in 2015. Increasing demand for flooded batteries in marine applications on account of its high effective power output is expected to augment its demand in the near future. The marine industry is growing in North America and Europe owing to rising activities for trading, coast guard securities, and other leisure activities.

VRLA batteries are anticipated to witness the highest gains and are alone expected to contribute to 34.7% of the market share by 2025. VRLA batteries are designed to operate at a high and changing temperature and can be installed at different orientations, unlike the flooded wet cell batteries.

VRLA batteries find their application in UPS systems, security systems, emergency lighting systems, engine starting, and back up for cell phone towers, and radio communication systems. The VRLA battery global market is expected to rise in accordance with the significant growth in the global market for UPS systems.

Automotive was the largest segment in 2015 and accounted for 59% of the global market revenue. The extensive usage of these products in the automotive sector is expected to grow as a result of increasing manufacturing of vehicles globally. The enriched distribution system of lead acid batteries along with the ready availability has also fueled the growth of the industry. 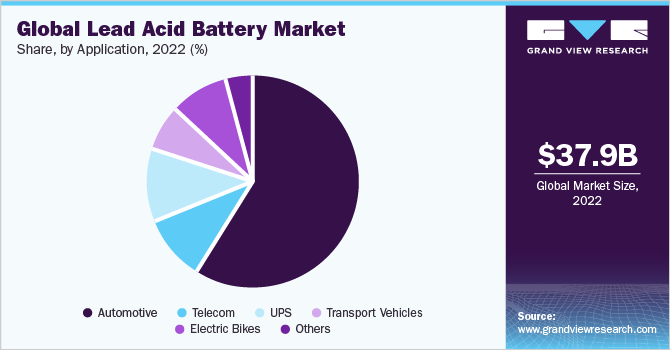 UPS is expected to gain substantially over the projected period at a CAGR of 7.2% owing to an increasing requirement for uninterrupted power supply in residential, commercial, and industrial sectors. Asia Pacific industry for UPS is expected to rise significantly over the forecast period on account of the rapid development of data centers and IT industries in the region.

Asia Pacific was the leading market with 43.6% of global share in 2015. The growing construction industry in emerging countries including China, India, Japan, South Korea, Malaysia, Indonesia, and Vietnam is expected to propel the utilization of lead acid battery.

Europe is expected to foresee growth on account of increasing number of offshore and onshore renewable energy installations in Germany, Italy, Sweden, and the UK. Furthermore, growing population and rising disposable income in the region are likely to stimulate the demand for passenger cars, which in turn is expected to aid in industry expansion.

Manufacturers are focusing on product innovation to gain an edge over competitors. For instance, in April 2014, Johnson Controls announced the release of VARTA Start - Stop Service Program (VSSP 2.1) to carry out battery replacements in a user-friendly manner, thus helping in the customization of flooded lead acid automotive batteries.

This report forecasts revenue growth at global, regional & country level and provides an analysis on the industry trends in each of the sub-segments from 2014 to 2025. For the purpose of this study, Grand View Research has segmented the lead acid battery market on the basis of product, construction method, application, and region: