The global leather chemicals market size was valued at USD 6.52 billion in 2017. The growth of the market can be attributed to surging demand for premium leather products from end-use industries such as footwear, automotive, apparel, and upholstery. These chemicals also play a vital role in the production of leather for personal protective equipment (PPE), including shoes and gloves.

Evolving consumer lifestyles coupled with rising disposable income are projected to fuel product demand in a broad range of applications such as jacket, wallet, upholstery, shoes, and belt among others. Leather chemicals, as biocides and surfactants, are also anticipated to foster market growth over the forecast period. 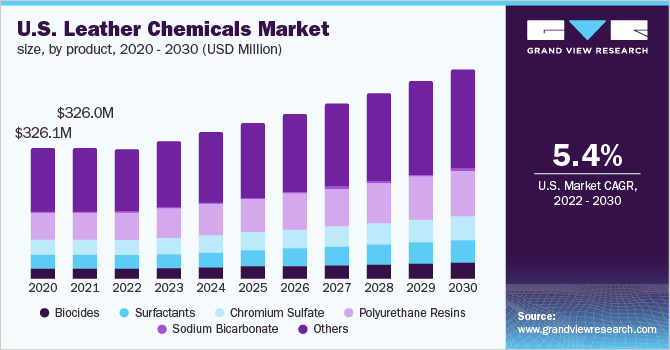 Leather undergoes various processes involving the use of leather chemicals in order to make it long lasting and give it a rich appeal. The demand for these chemicals is estimated to witness growth over the coming years on account of their increasing use to improve aesthetic value, texture, and color of leather along with the use of nanoparticles and microparticles for imparting greater water and abrasion resistance as well as better finish adhesion.

The market is dominated by a relatively small number of companies with large production capacities. Companies in China hold a prominent position in the global market owing to increased export across the globe. However, stringent regulations regarding chromium usage in the U.S. and Europe are expected to restrain the growth of the market over the forecast period.

Chromium sulfate is the most extensively used chemical in tanneries. It is a majorly used component in tanning process owing to its low cost and high functionality in leather processing. Biocides generally comprise of fungicides and bactericides and find applications in numerous tannery processes.

Biocides are added to liquid chemical formulations such as casein finishes, dyes, and fat liquors. They are usually toxic and are designed to kill certain life forms. Rising need for efficient preservation of leather along with ongoing global shift from salted to fresh hides is likely to stir up the demand for biocides over the coming years. Fungicides are also extensively utilized for preservation during storage or transportation over long distances.

Further, PU resins have excellent hydrophobicity, which enables market participants to reduce their production costs. Growing inclination of consumers towards artificial leather, owing to drawbacks of genuine leather, such as texture, stickiness, and high manufacturing cost, is poised to bolster the demand for PU resins over the forecast period.

Surfactants such as anionic, cationic, nonionic, and amphoteric are extensively utilized as surface-active agents in tanning process. These are not only used as emulsifiers or main reaction agents, but also as anti-electrostatic, water repellent, and abrasion reduction agents. Moreover, such agents can be used to ease the dispersion of oils in water.

Based on process type, the global leather chemicals market has been segmented into tanning & dyeing, beamhouse, and finishing. Increasing consumption of tanning & dyeing chemicals in leather making process is projected to boost their demand over the forecast period.

The demand for finishing chemicals is anticipated to increase over the forecast period on account of extensive coating applications in the leather manufacturing process. One of the major factors contributing to the rise in the demand for these chemicals is increased use of consumer products such as belts, jackets, and footwear.

In 2017, beamhouse was the second largest process segment. It includes operations such as wetting & soaking, liming & unhairing, and deliming & bating. Beamhouse being the beginning stage of leather processing consumes liberal amount of chemicals as for application ranging from preparation of hides and skins to preservation.

Fast changing fashion trends, increasing population, and surging demand for quality footwear are estimated to drive the market during the forecast period. Also, rising demand for luxury footwear is expected to augment the demand for finishing chemicals in the forthcoming years. Booming footwear market in Asian countries such as China, Vietnam, and India is likely to contribute to the growth of the footwear segment. 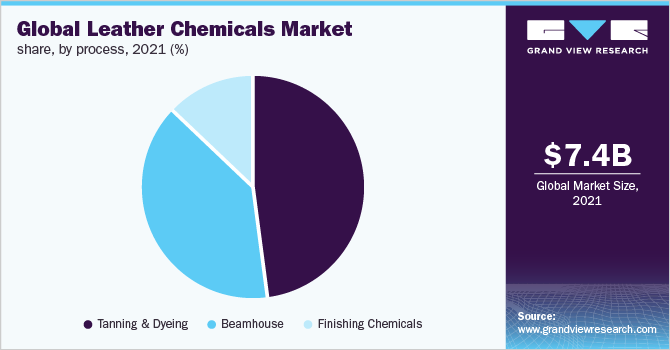 Garments include apparels such as jackets, shorts, trench coats, glove, and trousers.Rising urban population along with high disposable income are escalating the demand for luxury clothing items. Spiraling demand for leather apparel in Asia Pacific is projected to propel the overall market over the forecast period.

In 2017, Asia Pacific was the leading revenue contributor in the market. It is anticipated to post a CAGR of 8.0% during the forecast period. Low-cost labor and abundant availability of raw materials are estimated to stimulate the growth of the market in this region. Wide base of population coupled with growing disposable income in China and India has played a pivotal role in the growth of the market.

Europe is expected to register noteworthy growth during the same period owing to flourishing automobile, luxury clothing, and consumer appliances industries in the region. The regional growth also can be attributed to growing number of tanneries in Italy. However, stringent regulations regarding water pollution and use of hexavalent chromium are likely to impact small scale leather chemical manufacturers in the region.

The North America market is poised to tread along a healthy growth track over the forecast period, owing to rising demand for premium leather products. In this region, vegetable tannins and trivalent chromium are among the most commonly used tanning agents in leather-making process.

The genuine leather industry is witnessing a decline in Canada on account of rising awareness campaigns by various animal rights groups. Earlier, Canada imported leather from India and other Asian countries. However, owing to rising cruelty against animals, the government of the country imposed stringent laws and regulations on the use of leather products.

Growing penetration of leather chemicals in the production of footwear, automotive upholstery, home furnishing, and other accessory goods is impelling prominent market players to focus on expansion. Integration is projected to be a popular market expansion strategy adopted by various companies in the value chain.

Companies are also focused on development of a hybrid chemical system for tanning. Government regulations against the use of harmful chemicals and effluent discharge into water bodies are pushing manufacturers to invest in sustainable production. Some of the prominent companies involved in the production of leather chemicals are Stahl Holdings B.V., Lanxess AG, Elementis Plc, and Bayer AG among others.

This report forecasts revenue growth at the global, regional, and country levels and provides an analysis of the latest industry trends in each of the sub-segments from 2014 to 2025. For the purpose of this study, Grand View Research has segmented the global leather chemicals market report on the basis of product, process, end use, and region.