The global leavening agents market size was valued at USD 6.0 billion in 2021 and is expected to expand at a compound annual growth rate (CAGR) of 3.7% from 2022 to 2028. The market is majorly driven by increasing demand for baked products. Also, rising health consciousness among people and changing lifestyle makes the leavening agents more demanding. Increasing investment in R&D by various players to develop new leavening ingredients coupled with the increasing demand for bakery products are likely to drive the market growth during the forecast period. Also, increasing income level is playing an important role in determining the purchase of leavening agents. Moreover, rising technological advancement in developing the product will likely drive market growth during the assessment period. 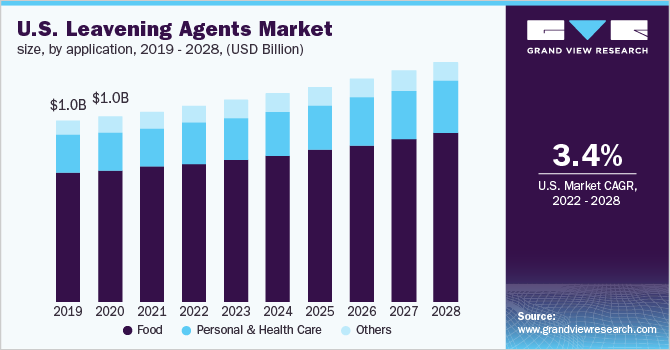 An increase in health expenditure and a surge in disposable income will boost market growth during the forecast period. With the increasing working population, there is rising demand for quality and nutritional food. Hence, the market is projected to showcase significant growth. Moreover, growing concerns for a healthier lifestyle are increasing the demand for leavening agents as it has a wide variety of functional benefits associated with their inclusion in food products.

Leavening agents are in great demand in the worldwide baking industry due to their major impact on dough characteristics and final baked items. The choice of leavening products in bakery products affects the flavor, texture, and color of the crumb, which is a crucial factor in baked-goods consumption. The need for leavening agents is high in the bakery sector since it is utilized in the baking process such as pies, rolls, cakes, biscuits, cookies, and other baked goods. Additionally, the rising trend of confectionary and home-baked products is expected to have a long-lasting impact on the global market.

In the worldwide bakery sector, manufacturers face fierce rivalry, forcing them to introduce new goods on a regular basis in a variety of flavors and textures. Manufacturers also use a variety of flours in their manufacturing lines, which drives up the demand for leavening agents in various concentrations in their goods. On the other side, the market for leavening acid is being constrained by the rising demand for natural products among health-conscious customers. Companies participating in this market have been doing substantial research and development to produce new leavening agent products in the food and beverage sector.

The COVID-19 pandemic has also affected the market in various regions. As lockdown was imposed, the supply chain was disturbed. Various businesses and industries were closed which adversely affected the market. This pandemic has also impacted logistics suppliers and farmworkers. Due to the nationwide lockdown, all the bakery shops were closed. This adversely affected the sales of leavening agents. The foodservice sector witnessed a fall in the demand for bakery products across the world, which were formerly regarded as one of the most in-demand items in the industry. The rise in the bakery and confectionery sector, as well as ongoing attempts by market participants to innovate new products, will fuel worldwide market expansion in the coming years.

Food contributed to the highest share of around 70% of the global market revenue in 2021 owing to its increasing demand for baked goods and beverages. The growth of the baked goods market is driving the segment market for food leavening agents. Increasing health awareness and changing lifestyles makes the market for food leavening agents more demanding in the future.

The biological segment contributed to the highest share of over 65% of the global market revenue in 2021 owing to its increasing sales. It helps in fermenting sugar to produce carbon dioxide. The most widely used biological agent is yeast. Changes in consumer food habits and increasing demand for bakery products are the major factors driving the growth of this segment. 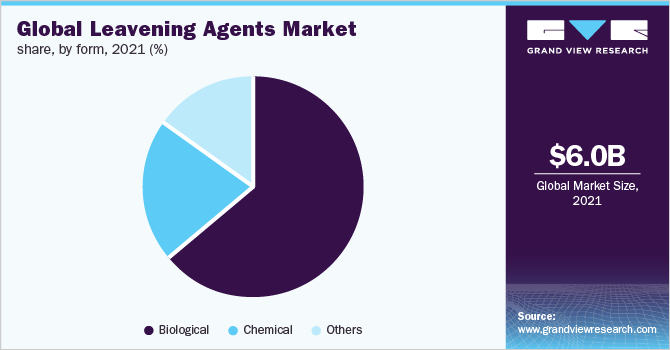 Chemical is estimated to register the fastest growth with a CAGR of 4.0% from 2022 to 2028. Rising consumer awareness regarding personal health is a major factor driving segment growth during the forecast period. Also, due to changing lifestyles toward health and the increasing working population globally, the segment is estimated to show growth during the assessment period. R&D is an important success driver for chemical leavening agents.

Europe made the largest contribution to the global market with over 30% share in 2021 due to high demand in the U.K. and Germany. Also, the increasing purchasing power of the consumers towards bakery products in this region will drive the segment growth. As per a survey carried out by International Baking Industry Exposition, consumption of bakery products is highest in Europe. In 2016, Europe’s bakery consumption reached USD 165 billion. Owing to this reason the demand for a leavening agent is witnessing an increasing trend in this region.

Asia Pacific is expected to witness a CAGR of 4.4% from 2022 to 2028. This can be credited to the increasing demand for leavening agents in this region. An increase in disposable income in countries like China, and India is further driving the segment growth. In addition, increasing demand for bakery products due to the high population is also responsible for market growth during the forecast period.

This report forecasts revenue growth at global, regional & country levels and provides an analysis of the latest industry trends and opportunities in each of the sub-segments from 2017 to 2028. For this study, Grand View Research has segmented the global leavening agents market report based on application, form, and region:

How big is the leavening agents market?

What is the leavening agents market growth?

Which segment accounted for the largest leavening agents market share?

b. Europe dominated the leavening agents market with a share of 32.1% in 2019. This is attributable to rising consumption of consumption of bakery products, and growth of regional bakery and confectionery industry.

Who are the key players in leavening agents market?

What are the factors driving the leavening agents market?

b. Key factors that are driving the leavening agents market growth include increasing demand for the baked products, increasing investment in R&D by various players to develop new leavening ingredients, and rising demand for quality and nutritional food.