The global LED driver market size was valued at USD 5.04 billion in 2021 and is anticipated to expand at a compound annual growth rate (CAGR) of 23.5% from 2022 to 2030. Technological progression in lighting components such as LED drivers has enabled energy efficiency and improved performance, thus amplifying market growth over the forecast period. Increasing penetration of the light-emitting diodes used in lighting in commercial and industrial segments has led to increased demand. These components are used in high brightness lighting applications. Moreover, companies such as Signify Holdings and Microchip technology, Inc are investing more in research and development to improve the efficiency of the existing lighting solutions. For instance, in January 2022, Signify Holdings announced a new line of Philips Hue intelligent lighting products and functions to help users create the perfect ambiance both indoors and out. The new products included Philips Hue Lucca wall light, Inara wall light, Calla bollard in stainless steel, and Resonate wall light. 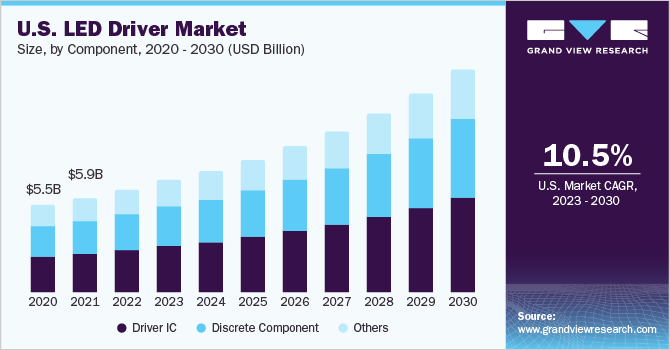 The light-emitting diode driver has become an essential part of industrial and commercial lighting and has helped to reduce electricity costs considerably. The growing reach of LED lights in several applications, such as outdoor, automotive, industrial, and horticultural lighting, is further supporting the growth of the market for LED drivers. Governments of various countries have launched smart city projects to develop technologically advanced and ecological living places. Sustainable lighting forms an essential part of such projects. Thus, the demand for IoT-based smart lighting solutions is growing high in such countries. Many cities have also installed smart street lights that turn on and off using daylight sensors.

The next-generation light-emitting diodes provide ease of use for designers to design luminaries efficiently. For example, a high voltage driver is capable of supplying up to 17 LEDs in series, with constant currents between 350mA and 1,200mA. Such advancements are expected to boost the market growth in the future. However, the absence of certain industry-defined standards to test the characteristics and behavior of such drivers has steered manufacturers to face several challenges in the industry. Solid-State Lighting (SSL) lighting and driver manufacturers worldwide follow their standards in manufacturing such a key component of lighting systems resulting in a lack of interoperability across its end-use applications hindering market proliferation.

The constant current type dominated the market for LED drivers and accounted for a revenue share of over 65.0% in 2021. It is anticipated to remain prevalent over the upcoming years owing to its heavy utilization across the industry. For several applications, it is desirable to utilize constant current drivers as they offer more control and provide the ability to design a uniform brightness and clear display. These devices only use a constant current driver, so they have high energy efficiency. Constant current LED drivers are favored because they give a constant forward current regardless of the input voltage fluctuations. With a constant current source, the driver keeps the current constant even when the voltage fluctuates with temperature, eliminating thermal runaway and over-driving the LED. While using light-emitting diodes in lighting applications, this method allows for higher brightness consistency and a longer lifetime.

The consumer electronics segment dominated the market and held the largest revenue share of 39.8% in 2021. This is owing to the increasing adoption of smartphones and TVs in developing countries worldwide. LED is replacing conventional LCD screens in both these segments since they offer better picture clarity, high color accuracy, and low power consumption. These components are also used in display panels of various consumer electronics such as refrigerators, air conditioners, and others. Growing demand for energy-efficient lighting across all industry verticals has compelled users to adopt LED lighting. Solid-state lighting (SSL) has a compelling value proposition and ROI due to its low maintenance costs and ability to efficiently offer consistent brightness. This results in the replacement of conventional light sources such as Compact Fluorescent Lamps (CFLs) and incandescent with LED lighting. As these lightings require an advanced driver, the market is expected to grow exponentially over the forecast period.

The automotive segment has emerged as a lucrative application segment for LED drivers as the industry is shifting towards high-brightness light-emitting diodes and LASER lights from conventional HID and halogen lights. Many governments have implemented regulations to stop the use of hazardous HID bulbs. For instance, the California government has banned aftermarket automotive HID light kits that emit blue light instead of the prescribed white to yellow range. The outdoor display segment includes signage, video walls, kiosks, and other similar application displays. The demand for video walls has risen predominantly in developed countries such as the U.S., China, Japan, and the U.K., owing to increased digital marketing and advertisement activities. Even though LCDs are typically utilized for outdoor displays, LED use is increasing as prices fall.

Asia Pacific dominated the market for LED drivers and accounted for the largest revenue share of 44.4% in 2021. The market is anticipated to witness a CAGR of over 23.9% from 2022 to 2030. The regional growth is attributable to increasing penetration of LED lighting, government subsidies, and improving manufacturing facilities in the region. The government of India launched the GRAM UJALA program for rural families in March 2021, to provide LED bulbs at a low cost of Rs.10 per bulb. If rural consumers submit working incandescent bulbs, they would be provided with 7-watt and 12-watt LED bulbs with a three-year warranty. The government of India has also distributed INR 36.78 crore LED lights across India. Such programs are boosting the market growth in the region.

China is a global base for consumer and industrial electronics manufacturing and a prominent supplier of LED drivers to the world. The increasing demand for LEDs across consumer electronics, such as smartphones, tablets, laptops, and T.V.s, is expected to drive the demand for these components over the forecast period. Moreover, a decline in the average selling price of the driver, along with technological advancements, has resulted in high demand across the lighting industry.

North America and Europe are also expected to witness a rise with the increasing adoption of LED lighting across high and low-end automotive segments. Countries such as the U.S. and Canada have beheld an increased adoption of the technology for outdoor applications. The European Union's ban on less efficient halogen and incandescent bulbs, along with lucrative incentive programs on LED, is boosting the demand for LEDs components in the European market.

The manufacturers have adopted mergers and acquisitions as a key strategy to increase their market share. For instance, in May 2022, Signify Holdings announced the acquisition of Fluence from ams-OSRAM. The acquisition helped the company to upgrade its global agriculture lighting platform and expand in the North American horticulture lighting market. Moreover, companies are investing in R&D activities and are focused on delivering innovative solutions. For instance, in April 2022, STMicroelectronics N.V. announced the launch of the latest power management I.C. for the company's AMOLED display portfolio.

The I.C. combines low quiescent current and higher flexibility to extend the battery life of portable devices. The practice of outsourcing component manufacturing to companies based in China, and Taiwan has witnessed a rise, as it enables the lighting manufacturers to reduce the cost of the end product. The adoption of smart lighting has triggered manufacturers to design innovative IoT-based lighting for smart home applications. For instance, in April 2018, Tridonic and Enlighted Inc. partnered to deliver IoT-based Solid State Lighting. Some of the prominent players in the LED driver market include:

This report forecasts revenue growth at global, regional, and country levels and provides an analysis of the latest industry trends in each of the sub-segments from 2017 to 2030. For this study, Grand View Research has segmented the global LED driver market report based on supply type, application, and region:

How big is the led driver market?

What is the led driver market growth?

Which segment accounted for the largest led driver market share?

b. Asia Pacific dominated the led driver market with a share of 44.4% in 2021. This is attributable to government subsidies, improving manufacturing facilities, and increasing penetration of LED lighting in the region.

Who are the key players in led driver market?

What are the factors driving the led driver market?

b. Key factors that are driving the led driver market growth include technological advancement in lighting components, improved performance, and growing penetration of LED lightings in several applications, such as outdoor, automotive, industrial, and horticulture.