The global less lethal ammunition market size was estimated at USD 867.4 million in 2019 and is expected to register a compounded annual growth rate (CAGR) of 4.3 % from 2020 to 2027. Growing incidences of political disputes and civil disorder in several nations across the globe expected to drive the demand. 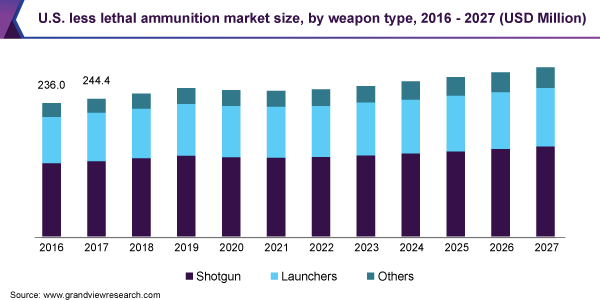 Less Lethal Ammunition (LLA) considered as the ammo designed to temporarily incapacitate, stun or cause temporary discomfort to a person without penetrating the body. It is generally used by law enforcement and military agencies to execute crowd and riot control operations.

Law enforcement and military agencies in the U.S. have their list of approved less-lethal ammunition. However, since this less-lethal technology is continuously evolving, the agencies are open to procure advanced ammo samples and conduct internal testing, thereby positively influencing the growth of its market.

There are several technologically advanced LLA, which are currently under development stage or marketed to the military or law enforcement agencies at a future date. Manufacturers employ efforts to attain recognition for their newly developed LLA from the reputed security agencies, which in turn support them to gain a strong foothold in the market.

Researchers have formulated several testing methodologies, which help in assessing less lethal kinetic energy munitions. In addition, the results from these tests conducted using the aforementioned methodologies presented to enable the military and law enforcement agencies to make an informed decision pertaining to procurement of the same.

Top players in the industry are developing less-lethal ammunition with different calibers and advanced designs leading to high reliability and effectiveness. In addition, these players are employing efforts to attain long-term supply contracts from top security agencies across the globe, thereby offering them a competitive edge in the global market.

The shotgun weapon type segment led the less lethal ammunition market and accounted for more than 54% share of the global revenue in 2019. The segment dominated the overall LLA market and expected to witness a notable CAGR over the forecast period on an account of the popularity of the 12-gauge caliber among the end-users as well as the manufacturers.

In 2016, SRM Arms, a U.S.-based less lethal munitions manufacturer, demonstrated an advanced patented Ringfire LLA technology for the most popular 12 gauge shotguns used by military personnel and law enforcement agencies. This in turn is expected to positively influence the overall demand for less lethal ammunition.

The launcher weapon segment is also one of the most popular categories in the less-lethal ammunition market that is likely to expand at a CAGR of 4.2% from 2020 to 2027. The development of advanced 40 mm caliber low-velocity cartridges with enhanced precision and reliability in all climatic conditions projected to drive the segment growth.

Key players such as Rheinmetall AG have developed a comprehensive portfolio of advanced 40 mm less-lethal cartridges and pyrotechnics solutions. These products expected to emerge as one of the most effective solutions for peace enforcement and peacekeeping operations over the forecast period, thereby driving their market growth.

Rubber bullets segment led the market and accounted for more than a 35% share of the global revenue in 2019. In addition, it is also expected to witness a CAGR of 4.7% over the forecast period, since these bullets are the most conventional less-lethal projectiles used by most of the security agencies in the peace enforcing operations across the globe.

Rubber bullets are the projectile designed to deliver a stinging blow that incapacitates the protestors, without causing the fatality through penetrating the flesh as the metal-jacketed projectiles do. Thus, rising protests, riots, and political disputes all around the world expected to drive the demand for rubber bullets in the future.

Pyrotechnic ammo is also emerging as one of the effective solutions that facilitate military and law enforcement agencies to deal with violent offenders and unruly demonstrators during riot and crowd control operations. The aforementioned ammunition enables security agencies to respond to threats in a quick and less-lethal manner.

The law enforcement end-use segment led the market and accounted for more than the 58% share of the global revenue in 2019. The law enforcement agencies are looking forward to reducing the risk of fatalities during the encounter with the protestors and irritants during riot or crowd control operations.

Several players have developed highly effective less-lethal ammo for every situation, with ranges and effects changing as per the planned requirements for different end users including military and law enforcement. Some of the advanced LL includes irritant cartridges, irritant grenades, and multi-flash bangs. 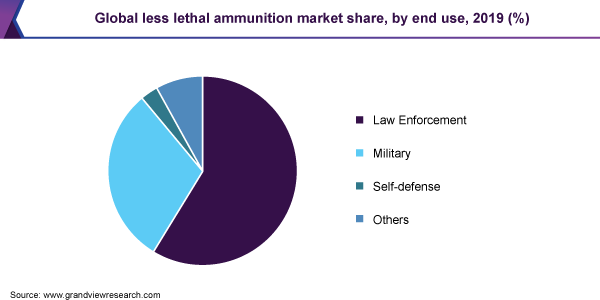 The companies have also developed a broader range of illumination and signaling ammo for expected law enforcement and military scenarios in both infrared and visual spectrum. This type of ammunition includes signal smoke grenades, flares, and other ammunition expected to drive the growth potential of LLA in both military and law enforcement end use.

The industry is also witnessing the development of rubber composite bullets for self-defense and sporting end-use. The bullets are increasingly used for sports and indoor safety shooting with a lesser chance of penetrating the human flesh. In addition, they are also highly used for home defense against intruders.

North America dominated the market and accounted for over 32% revenue share in 2019. U.S. is the major contributor to less lethal ammunition sales in North America, since it exhibits the high defense-spending budget every year, thereby leading to higher procurement of LLA for law enforcement and military agencies

U.S. is one of the most impacted nations across the globe due to the COVID-19 pandemic outbreak. The strategies employed by the country to curb the virus spread are expected to negatively impact its economic growth forecast in the coming years. This in turn is expected to impact its defense spending over the next few years thereby restricting the market growth.

Asia Pacific is also expected to witness notable growth in terms of demand over the forecast period considering the rise in defense spending budget of China in 2020. Moreover, the rising incidences of political disputes and civil disorder in some parts of India especially Kashmir are expected to drive the demand for less lethal ammunition.

Middle East Asia is expected to witness the fastest CAGR of 7.8% over the forecast period, owing to a notable rise in crime rate in countries such as South Africa, Kenya, Nigeria, and Papua New Guinea. Moreover, violent protests against foreign migrants in the recent past are pushing law enforcement agencies to equip themselves with riot control ammo.

The market has been witnessing an increasing trend of organic and inorganic growth through expansion and mergers and acquisitions. The companies are trying to increase their sales through acquisition, investment, and innovation. The companies are expanding their capacities to facilitate the respective markets.

The top players in the industry are employing efforts to attain recognition for their new products from the top military, law enforcement, and security agencies across the globe. As a result, it is expected to offer them a competitive edge over others and enable them to gain a strong foothold in the market. This in turn is expected to drive the overall industry in the future. Some prominent players in the less lethal ammunition market include:

This report forecasts revenue growth at global, regional, and country levels and provides an analysis of the latest industry trends in each of the sub-segments from 2016 to 2027. For the purpose of this study, Grand View Research has segmented the global less lethal ammunition market report on basis of weapon type, end use, product, and region: