The global ligation devices market size was valued at USD 860.3 million in 2018 and is expected to grow at a compound annual growth rate (CAGR) of6.32% from 2019 to 2026. A rise in surgical procedures and minimally invasive procedures is anticipated to drive the growth. The market is also driven by the increasing number of gastrointestinal, gynecological, urological, and cardiac surgery procedures that requires ligation devices for diagnosis and treatment. Furthermore, significant rise in the prevalence of aging associated diseases and rise in demand for endoscopic procedures requiring ligation devices are also the factors propelling the devices market. 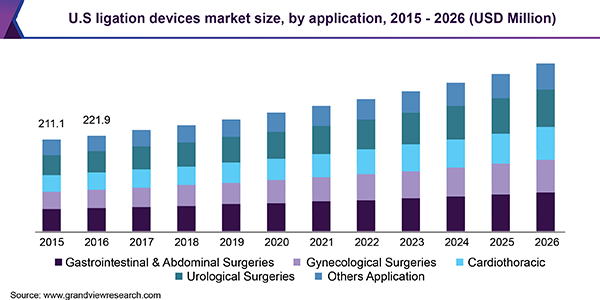 Ligation is a surgical procedure of tying a ligature around duct, tube or blood vessel in the body. Endoscopic ligation is an effective method for the treatment of protuberant lesions and is widely used as a management of bleeding esophageal, gastric varices, and angiodysplasia. It is a feasible method for removing upper gastrointestinal lesions. It also reduces the risk of related complications, such as perforation and hemorrhage.

Factors, such as several government initiatives and increasing healthcare spending for the treatment of digestive system related diseases are also anticipated to propel the market growth. In 2015, Hepatitis (USD 23.3 billion), esophageal disorder (USD 18.1 billion), biliary tract diseases (USD 10.3 million), and abdominal pain (USD 10.2 billion) were the most expensive categories of healthcare expenditure in U.S. There are more than 40.7 million ambulatory visits for GI disease in U.S. each year. In 2017, the National Institute of Health (NIH) funded USD 1.8 billion for research in digestive diseases in the country.

Geriatric population is considered to be more prone to digestive disorders and chronic conditions. The rise in global geriatric population is expected to create a high impact on ligation devices market. In addition, the high adoption rate of minimally invasive surgeries, especially for the geriatric patients is expected to boost the growth. According to the National Institutes of Health (NIH), in 2015, there were 617 million people over the age of 65 years, which is 8.5% of the total population. The number is projected to reach 1.6 billion by 2050. The aforementioned factors are expected to drive the market growth during the forecast period.

The gastrointestinal and abdominal surgery segment captured the majority of the market share in 2018 and is expected to dominate the market during the forecast period. The high market size is primarily attributed to the rising prevalence of age-related diseases coupled with the rising demand for ligation devices in therapeutic and diagnostic of gastrointestinal procedures.

The cardiothoracic segment is expected to expand at the fastest CAGR during the forecast period driven by the increasing incidence of heart-related diseases along with an increasing number of procedures. The ligation devices can also be used in open surgery, such as repair of a faulty heart valve or to bypass blocked arteries. Furthermore, an increasing number of non-invasive heart surgeries are also propelling the market. Patients with atrial fibrillation are often recommended a procedure known as left atrial appendage closure. The pericardial ligation procedure works with the lariat device and does not require an open-heart surgery, thereby minimizing post-operative complications. The aforementioned factors are anticipated to propel the growth.

The hospitals segment dominated with more than 75% market share in 2018. The key drivers of the segment are increasing number of procedures, rise in healthcare spending, and growing number of hospitals. According to the American Hospital Association (AHA), there were 6,200 active hospitals in U.S in 2017, an increase from 5,534 hospitals in 2016.

Ambulatory Surgical Centers (ASCs) segment also captured considerable market share in 2018. The segment is expected to register the highest CAGR during the forecast period. Factors contributing to the high growth include increasing number of outpatient procedures and rising adoption of minimally invasive surgeries, which do not require longer hospital stays. In addition, 20% to 50% cost savings in ASCs compared to the cost involved to perform the same procedure in hospitals is also anticipated to drive the segment growth over the forecast period.

The accessories segment accounted for the largest market share of more than 55% and is expected to expand at the fastest pace during the forecast period. The accessories segment is further divided into clips and clip removers. The clips segment dominated the market in 2018 and is also expected to register a high growth rate. Availability of these clips in a variety of sizes and multiple use in single procedures is anticipated to drive the segment growth.

Appliers segment also has considerable market share and is expected to expand at a CAGR of 5.99% during the forecast period. The segment is further divided into disposable and reusable appliers. Reusable appliers account for the largest market size and is expected to dominate the market during the forecast period, primarily attributed to the product usage in both minimally invasive and open surgery.

MIS procedures accounted for the largest market share in 2018 due to benefits, such as quick recovery time and reduced post-operative cost. MIS procedures are also associated with shorter hospital stays and lower chances of readmission, surgical site infection, pain, and mortality. Other benefits, such as requirement of small incision and reduced blood loss during the procedure are also driving the segment growth. 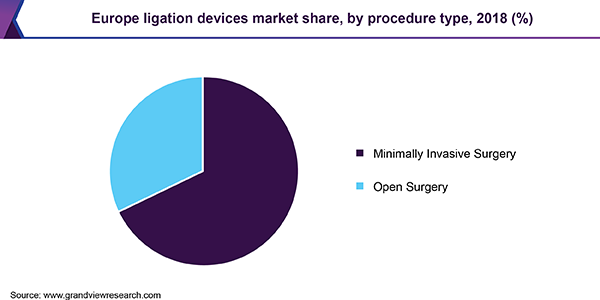 The open surgery segment accounted for a considerable share of the market for ligation services in 2018 and is expected to grow at a rapid pace over the forecast period. The high growth rate is primarily attributed to the increasing incidence of heart disease and the rising number of open-heart surgeries. Ligation devices are used in various types of open heart surgeries, such as Coronary Artery Bypass Graft (CABG), aortic valve replacement, and mitral valve replacement. According to the Society of Thoracic Surgeons Adult Cardiac Surgery database, in U.S., a total of 156,931 CABG procedures were performed in 2016, thus driving the uptake of ligation devices.

North America dominated in 2018 owing to the high cost of treatment and the increasing number of procedures. U.S. spearheaded with over 75.0% regional market share in the same year. Furthermore, increasing government spending and the presence of key players is also propelling the market growth. In 2015, healthcare expenditure to gastrointestinal conditions was totaled USD 135 billion, which was much higher than other common diseases.

Asia Pacific is expected to register the fastest growth during the forecast period. The high growth rate is primarily attributed to the increasing prevalence of gastrointestinal diseases which can be treated by minimally invasive techniques using ligation devices. These devices are used in many endoscopic procedures. Several Asian companies are focusing on development of GI specialized products and are targeting emerging countries. For instance, Japanese company Olympus, a manufacturer of endoscopic devices, established a new factory in Vietnam as well as multiple training centers in India and China.

This report forecasts revenue growth at global, regional, and country levels as well as provides an analysis of the latest industry trends in each of the sub-segments from 2015 to 2026. For the purpose of this study, Grand View Research has segmented the global ligation devices market report on the basis of product, application, procedure type, end use, and region:

What is ligation devices market size?

What is ligation devices market growth?

Which segment dominated the market?

b. North America dominated the ligation devices market with a share of 36.4% in 2019. This is attributable to increasing government spending and the presence of key players in the region.

What are the key players in the market?

What are the factors driving market growth?