The global liposomal doxorubicin market size was valued at USD 814.6 million in 2015 and is projected to grow at a CAGR of 6.2% during the forecast period. The market is experiencing growth due to rising breast & ovarian cancer cases and growing awareness regarding the benefit of liposomal doxorubicin formulation over the traditional doxorubicin. 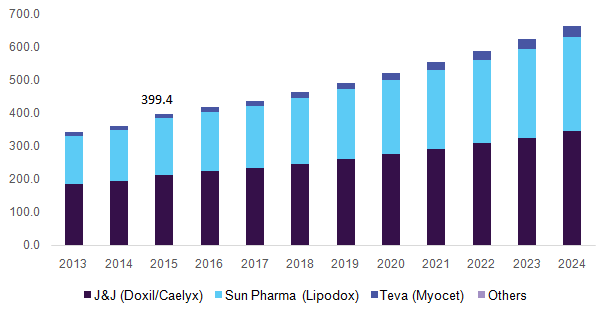 To tackle the shortage of branded liposomal doxorubicin, namely Doxil or Caelyx, the U.S. FDA approved a generic version of liposomal doxorubicin formulation for second-line treatment of ovarian cancer and chemotherapy regime for other cancers. Also, import of the drug was approved under “exercise enforcement discretion” in the U.S., which is the largest market of doxorubicin formulation. The growing demand for this drug has led to huge import of doxorubicin HCl liposome injections, which is expected to drive the market.

Moreover, the increasing involvement of significant private players to reduce redundancies and complexities in the global supply chain is one of the key factors that can be attributed to the growth.

J&J (Doxil/Caelyx) segment held 51.6% of the revenue share in 2015. The high incidence and mortality rate of ovarian cancer is one of the crucial determinants for this market. The growing demand for Doxil or Caelyx as second-line treatment of ovarian carcinoma is also expected to propel the demand in the coming few years. However, the growing generic competition and the suspension of manufacturing of Doxil by the third party manufacturers in 2012 negatively impacted the sales of Janssen Products, LP.

However, the others products segment is the fastest growing. It is expected to grow at a CAGR of 18.5% between 2016 and 2024. The growing number of approvals for generic formulations to address the shortage of life-saving drugs is one of the key factors expected to impel the demand over the forecast period. The other products segment included Novel Drug Delivery Systems by Zydus Cadila, DOXT SL by Sequus Pharmaceuticals, Inc., and few others.

The lack of approval for any other products, excluding Doxil and Lipodox, in the U.S. is negatively impacting the market. However, the growing availability of products such as Evacet, Nudoxa injections, and DOXT SL tablets in the European region, the second largest segment, is one of the crucial factors driving the demand over forecast period. Moreover, the presence of various pipeline products awaiting approval by the U.S. FDA and European Medicines Agency is one of the key attributes for this market.

Breast cancer held approximately 21.2% of the revenue share in 2015. The growing advancement in the formulations is one of the key factors enhancing the adoption and utilization of the drug to treat breast carcinoma. Moreover, Ovarian carcinoma was the second largest application in 2015 and is expected to grow at a CAGR of 5.7% during the forecasted period. The increasing usage of drugs for chemotherapy and growing demand for targeted therapy drugs as well as growing investment by private players to cater to this application are some of the factors anticipated to propel the market in the coming few years. 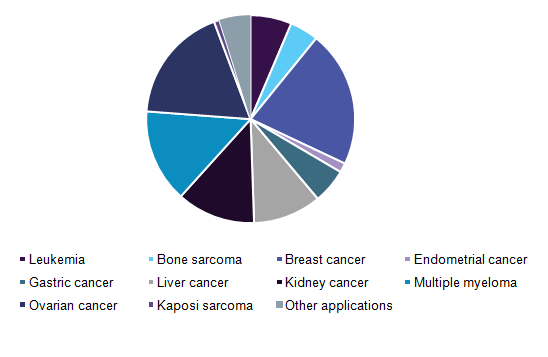 However, the liver cancer segment is yet to exhibit growth with an approximate CAGR of 7.8% in the coming few years. In the recent years, it has been identified that liposomal doxorubicin is the most effective chemotherapeutic drug for hepatocellular carcinoma. Some of the products applicable for this condition are Thermodox, Caelyx, and others. The growing government initiatives to drive better manufacturing in terms quality and quantity are also expected to impact the market positively in the coming years.

North America held majority of the revenue share of about 49.03% in 2015. The high prevalence of sarcomas and ovarian, breast, and liver cancers as well as several other cancers can be accounted for the largest share. In addition, the presence of advanced healthcare facilities and high patient awareness levels regarding the various available treatments are key factors driving the growth in this region. The strong reimbursement and regulatory framework are also amongst the key forces influencing the market growth.

Asia Pacific region is expected to witness a lucrative growth of 8.2% over the forecast period. Key factors attributable to the rapid growth during the forecast period from 2016 to 2024 include enlarging patient pool, rising awareness of efficacious drug alternatives, and growing investment by the private & public players.

This report forecasts revenue growth and provides an analysis on the industry trends in each of the sub-segments from 2013 to 2024. For the purpose of this study, Grand View Research has segmented the liposomal doxorubicin market on the basis of product type, application, and region: