The global doxorubicin market size was valued at USD 809.6 million in 2015 and is projected to grow at a CAGR of 6.4% over the forecast period. Increasing government intervention to support technological advancement in clinical oncology such as intravenous free therapy and digital microfluidics for on chip biochemical analysis, is expected to boost the usage rate of the drug during the forecast period. 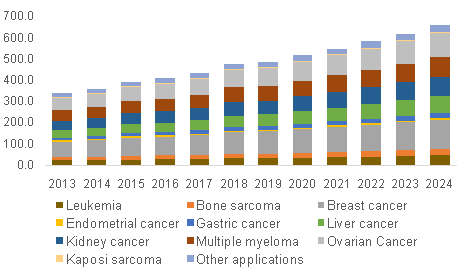 According to the American Cancer Society (ACS), it was reported that about 38 million people die every year due to non-communicable diseases, with more than 8 million of them dying from tumor malignancy. Furthermore, based on the estimates of the World Health Organization (WHO), the cancer incidence rate could further increase by 50% by 2020. The rising use of the drug to treat AIDS related Kaposi Sarcoma, breast malignancy, multiple myeloma, acute meroblastic leukemia is one of the pivotal factors that is expected to boost the doxorubicin industry value.

In 2015, breast cancer application of doxorubicin market held a majority share of over 21%. The rapidly growing number of cases of breast cancer and high preference of doxorubicin over other drugs for the treatment of malignant neoplasm of the breast are some of the factors impelling the industry growth in the coming few years. Based on the analysis of the Breast Cancer Organization, it is anticipated that over 12% of the total women population in the U.S. to develop invasive ductal carcinoma during the course of their lifetime. Increasing the survival rate is one of the indicators for the growing adoption of technologically advanced treatment therapies. 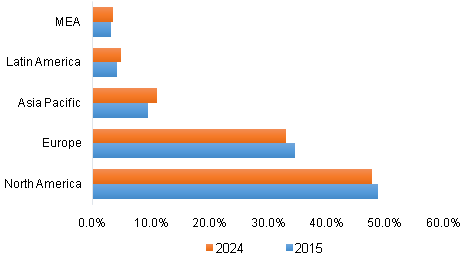 The application of doxorubicin in liver cancer treatment therapies is expected to grow at a lucrative CAGR of 8.0% due to increased prevalence of hepatocellular carcinoma and subsequent growth in the treatment rate. Moreover, doxorubicin is identified as the one of the most effective for the treatment of liver cancer over other drugs which is expected to positively reinforce industry growth.

The growing prevalence of hepatocellular carcinoma and the increasing survival rates are some of the prime factors that indicate the high adoption of advanced medication to treat liver cancer. Some of the most effective systemic chemo liver cancer drugs are 5-fluorouracil, doxorubicin (Adriamycin), and cisplatin. The drugs are used in combination therapy and in monotherapy. The growing usage of the drug in various therapies is one of the crucial factors anticipated to boost their use in treating liver cancer during the forecast period.

In 2015, North America accounted for the maximum revenue share of 48.8 %, which was followed by Europe. The U.S. is the most important sector and captured a majority share of the North American segment. Based on the estimates of the North American Association of Central Cancer Registries, Inc. in 2014, it was stated that over 4,046,058 people were living with various malignant tumor types such as prostate, lung, colon, bladder, breast, and other tumor malignancy.

The growing number of malignancy cases and subsequently increasing usage of the doxorubicin in mono and combination chemotherapies are among few industry impacting factors. Moreover, the increasing number of mergers and acquisitions and partnerships for clinical trials with technologically advanced doxorubicin formulations is one of the crucial factors driving the market in this region. For instance, Aeterna Zentaris announced that it had completed patient recruitment procedures for the ZoptEC phase 3 clinical study with Zoptarelin Doxorubicin for advanced endometrial cancer cases in 2015.

Asia Pacific is expected to emerge as the fastest-growing region with a CAGR of 8.3 % over the forecast period. Countries such as India, Japan, and China are expected to present growing pharmaceuticals markets. The prevalence of gastric cancer is the third most common type of tumor malignancy, after breast and lung cancer. The incidence rate of stomach malignancy is declining, which further indicates betterment in treatment quality and improvements in drug formulation. These improvements are expected to further drive the anti-cancer drugs market in the coming years.

* 15% free customization - This is equivalent to work done by one research analyst for 5 working days.

This report forecasts revenue growth and provides an analysis on the latest trends in each of the sub-segments from 2013 to 2024. For the purpose of this study, Grand View Research has segmented the doxorubicin market on the basis of application and region:

How big is the doxorubicin market?

What is the doxorubicin market growth?

Which segment accounted for the largest doxorubicin market share?

b. North America dominated the doxorubicin market with a share of 48.4% in 2019. This is attributable to the high incidence of cancer, presence of key players, and increasing number of mergers and acquisitions and partnerships for clinical trials with technologically advanced doxorubicin formulations.

Who are the key players in doxorubicin market?

What are the factors driving the doxorubicin market?

b. Key factors that are driving the market growth include increasing government intervention to support technological advancement in clinical oncology such as intravenous free therapy and digital microfluidics for on-chip biochemical analysis.