The global liposuction surgery devices market size was valued at USD 516.74 million in 2018 and is expected to grow at a compound annual growth rate (CAGR) of 11.7% % from 2019 to 2026. Growing beauty consciousness among a large population and increasing demand for liposuction procedures by both men and women are majorly driving the market. 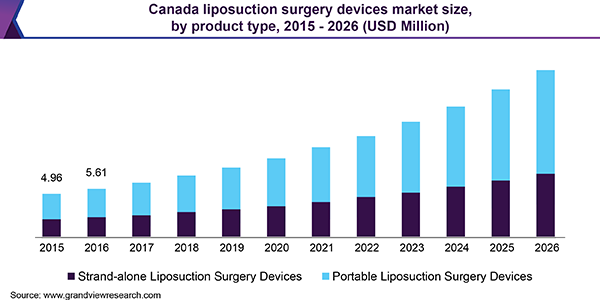 Besides, the growing number of cosmetic surgeries across the globe is another driving factor in market growth. Liposuction surgery is gaining popularity due to increasing promotions by social media, minimal health risks, and better results while reducing costs. Besides growing trends in non-invasive cosmetic procedures, many women prefer undergoing cosmetic surgery rather than changing their lifestyle.

The need for immediate results instead of adopting a healthy lifestyle by following a healthy diet, and exercise, most people are preferring liposuction surgery due to better and faster results. Hence, the growing desire to improve one’s appearance is expected to propel the demand for liposuction surgery. Rising awareness among a large population for aesthetic appearance is another major driving factor of this market. The Research behind ‘THIS IS ME’ campaign by Allergan studied that, out of 2000 women, 20% of women desired to look approximately 5 years younger, 41% desired to look fresher and radiant. Hence, the growing trend among women for a natural look is increasing the demand for liposuction surgery, thereby driving industry growth.

Increasing technological enhancements in the liposuction procedure are also propelling the Industry growth. A wide range of advancements has been incorporated into the traditional fat suctioning technique. They include power, laser, ultrasound, and radiofrequency (RF). Each technology has its own set of advantages and complications. Hence, increasing awareness of these advancements among surgeons is driving the liposuction surgery devices market.

The portable liposuction surgery devices segment is expected to grow at a faster rate as compared to standalone liposuction surgery devices owing to its easy usage. Besides, the rise in technological advancements in these devices and reasonable rates is impacting the segment growth. Hence, growing awareness of the benefits offered by these devices is expected to drive the demand, thereby boosting the market growth.

Portable liposuction surgery accessories are convenient to use. They are well organized and can be easily plugged-in and operated in surgeries. Owing to the integration of multiple modalities in a compact system, these devices are predicted to gain significant popularity among surgeons across the globe, thereby propelling its demand.

Amongst all, the laser-assisted liposuction (LAL) segment registered a considerable share of the market in 2018 and is expected to continue over the forecast period owing to increased adoption due to its benefits, such as a quick and effective way of removing body fat. Also, laser-assisted liposuction does not require a hospital stay for the patient and can return to normal life in a few days. 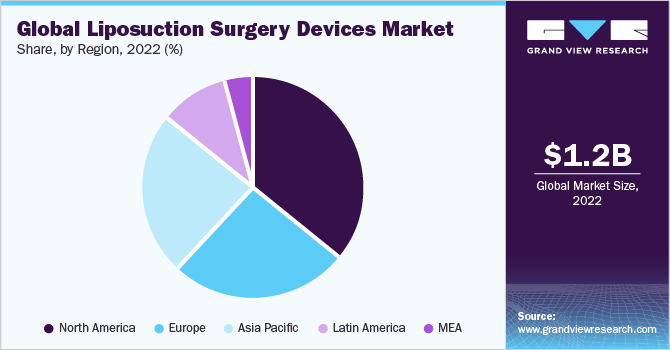 Improved efficacy and safety features of laser-assisted liposuction in comparison to traditional liposuction method is another driving factor of the segment. The integration of ultrasound technology in modern lasers is one of the major factors of segment growth. Moreover, better aesthetic results and skin retraction, reduced fatigue, less blood loss, and less recovery time are few other benefits offered by laser-assisted technology.

North America dominated the market in 2018 owing to the increased adoption of modern technologies and the presence of numerous industry players.

The Asia Pacific is predicted to grow at a faster rate owing to awareness among people for the benefits of liposuction, increased disposable income, and rising demand for the targeted surgery by the fashion and film industry. Also, medical tourism and the growing healthcare industry in the region are propelling the growth of the market.

The companies are focusing on adopting various strategies, such as innovations in the existing technologies, research and development, and increasing awareness for the surgery in untapped regions across the globe. For instance, Save Face is one of the national registers of accredited practitioners, recently launched a consumer awareness campaign on the London Underground in December 2014. The campaign focused on patient awareness regarding aesthetic treatment.

Similarly, Galderma held a global campaign in Monaco to increase safety awareness and educate potential patients to eliminate the myth of unnatural looking for aesthetic treatment. Some of the prominent players in the liposuction surgery devices market include:

This report forecasts revenue growth and provides an analysis of the latest trends in each of the sub-segments from 2015 to 2026. For this report, Grand View Research has segmented the liposuction surgery devices market based on product type, technology, and regions

How big is the liposuction surgery devices market?

b. The global liposuction surgery devices market size was estimated at USD 570.0 million in 2019 and is expected to reach USD 640 million in 2020.

What is the liposuction surgery devices market growth?

b. North America dominated the liposuction surgery devices market with a share of 36.2% in 2019. This is attributable to the increased adoption of modern technologies and the presence of numerous industry players.

Who are the key players in liposuction surgery devices market?

What are the factors driving the liposuction surgery devices market?

b. Key factors that are driving the market growth include growing beauty consciousness among a large population and increasing demand for liposuction procedures by both men and women.