The global liquid applied membranes market size was worth USD 3.84 billion in 2014. Its properties such as low odor, low viscosity, and environment-friendly nature are likely to facilitate an increase in the utilization of the product in the infrastructure sector. Moreover, these have easy application over complex surfaces and are cost-effective as compared to waterproofing sheets.

The product has a long shelf life and is easy to re-apply which is anticipated to fuel the growth over the next seven years. In addition, liquid applied membranes are being preferred for improving the overall structure of commercial, residential as well as industrial buildings. They can be used in conjunction with high-performance materials & polymers in order to enhance their waterproofing properties. 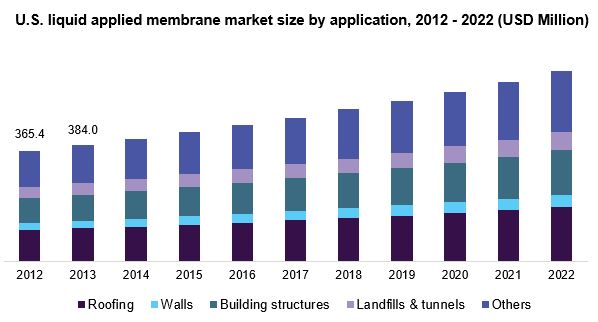 The growing need for expansion of the infrastructure sector in the developing economies coupled with the high focus on investment is projected to propel the growth over the coming years. The government has been taking numerous initiatives pertaining to the industry, which is expected to positively affect the market.

North America and Europe were the major markets for the product in 2016 as the result of supportive government policies and the recovery of the construction industry. The Asia Pacific is likely to be one of the most attractive markets due to the high economic growth in India & China.

Extensive research is being conducted by manufacturers in order to develop innovative products. The companies have been focusing on product differentiation, which is likely to fuel growth over the coming years. Increasing utilization of bio-based as well as environment-friendly products is expected to augment the demand over the forecast period.

Liquid applied membranes are available in fluid form and can be sprayed or brushed on the surface to be waterproofed. The liquid dries to provide a joint-free waterproof membrane and its thickness can be controlled based on the amount of liquid applied per unit area. These have superior qualities and can also be applied to older membranes.

The newly developed rapid-curing resin technology is primarily applied for balconies and exterior walkaways in occupied buildings. Applications of this technology include roofing and waterproofing. This technology is based on the cold-liquid applied reinforced membranes system. The membrane system can be installed either as a complete edge-to-edge membrane system or in discrete locations to address localized conditions.

Roofing dominated the global market and was valued at USD 1.00 billion in 2014. The rising urban population and increased demand for residential construction are expected to augment the growth over the forecast period.

Building structure held a revenue share of 20.0% in 2014. New commercial and residential construction activities in developing regions predominantly in Latin America and the Asia Pacific are estimated to augment the demand in the near future. In addition, strong economic development and the elimination of barriers to FDI in India are anticipated to spur the demand from the construction sector.

The cementitious segment accounted for the majority share in 2014. The market is forecasted to witness likewise tendency over the next seven years due to relatively low cost as compared to sheet membranes.

Polymer-modified cementitious membranes are highly flexible and low cost. These are being widely used for conservative waterproofing which is a prominent factor propelling its demand. W.R. Meadows introduced a product called “cem-kote flex st” which is a highly flexible cement membrane and can be easily applied to the substrate by brushing or with spray equipment for larger applications.

The polyurethane segment is estimated to witness a substantial growth of 7.2% from 2016 to 2022. These have uniform thickness hence making its application uniform and easy. These membranes are being widely accepted for use in roofs, wet rooms, water & sewage treatment plants, stadium stands, bridges, and building foundations & retaining walls. However, the high cost of these products is expected to restrict market growth over the next seven years.

The residential segment accounted for a revenue share of 30.0% in 2014. The segment is estimated to witness a substantial demand owing to the increasing migration activities in Europe. A major shift in the consumer lifestyle has stimulated a rise in the renovation and modernization activities in present households. This is expected to further boost the demand for the product over the forecast period.

Liquid applied membranes are vapor non-permeable thus protecting the building from the effect of extreme weather conditions. The growing requirement of energy-efficient and green residential buildings is expected to further propel the demand over the forecast period. 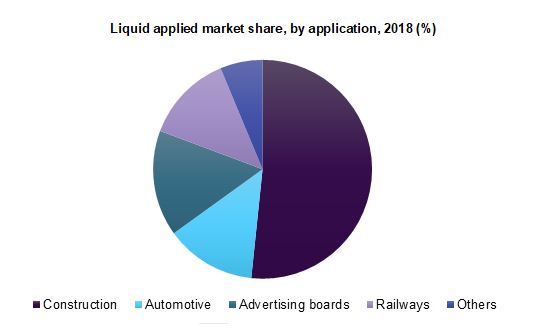 The commercial segment is anticipated to witness significant growth due to the rising number of small & medium business enterprises worldwide. In addition, rising efforts toward the improvement of education infrastructures such as colleges, schools, and institutions are expected to augment the demand in the near future.

Europe dominated the global liquid applied membranes market in 2014 and is estimated to grow at a CAGR of 7.4%, in terms of revenue, from 2016 to 2022. Increasing concerns pertaining to water and waste management are expected to boost the demand for waterproofing products in the region. In addition, the expanding demand from countries including Poland, Turkey, and Russia is anticipated to drive market growth over the forecast period.

Asia Pacific demand was worth USD 700.0 million in 2014 and is anticipated to witness substantial growth. Rapid industrialization, infrastructure development, and increasing consumers’ willingness to spend in the region are expected to drive market growth.

Numerous companies are integrated across the value chain which facilitates continuous raw material supply as well as low production cost. Furthermore, companies including DuPont and Sika procure raw materials from suppliers and use them to manufacture waterproofing membranes. British Petroleum, ExxonMobil, Marathon Oil Corporation, and Volero Energy Corporation are some of the key suppliers of bitumen on a global scale.