The global liquid biofuels market size was valued at USD 65.4 billion in 2019 and is expected to grow at a compound annual growth rate (CAGR) of 6.4% from 2020 to 2027. It is anticipated to witness moderately fast growth and 141,592.2 thousand tons of oil equivalent in terms of demand by 2027. Biofuels are expected to observe a growth in demand on account of their potential to reduce or eliminate dependency on fossil fuels. These are cleaner energy alternatives, which result in zero carbon dioxide emissions on combustion and make use of the plant-based raw materials for their production. 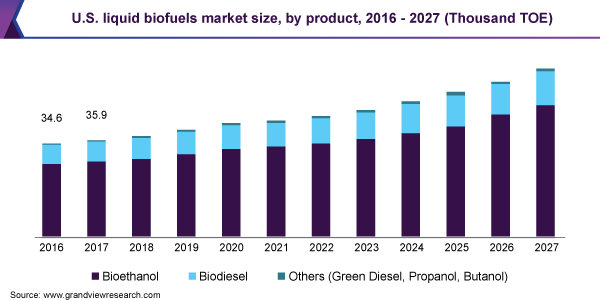 Diminishing fossil fuel-based resources and rising awareness regarding environment protection are factors likely to drive the market. Furthermore, the presence of various regulatory policies and tax incentives across the world is anticipated to compel biofuel manufacturers to invest more in R&D activities to achieve commercialization of the latest second- and third-generation technologies.

Liquid biofuel is an energy-efficient alternative and helps reduce energy security risks and pollution levels associated with the combustion of fossil fuels. Hence it can be blended in large quantities with traditional fossil fuels for use in applications such as transportation. Although biodiesel has the ability to replace conventional fuel, its production capacity is not enough to meet the current demand. Thus, the market is highly regulated with various tax incentives in different countries.

Governments across the world have introduced numerous policies and strategies to mitigate the concerns associated with climate change. Energy security, rural development, and climate change mitigation are some of the crucial parameters responsible for such policy goals.

The demand for fatty acids bio jet fuel, hydro processed esters, and renewable diesel, also known as hydrotreated vegetable oil (HVO), is expected to ascend over the forecast period. This growth in demand can be attributed to their potential properties of being used unblended without maintenance regimes, modification to engines in transportation, and fuel supply infrastructure.

Emerging economies such as Brazil, China, India, and some of the European countries aim to replace 5% to 20% of the total fossil-based fuels with biodiesel in applications such as transportation. However, there is substantial potential for facilities with low economies of scale by producing biodiesel at a smaller size, with more significant potential to benefit small-scale farmers in the raw material stage and contribute to rural development.

Biofuel demand has increased over the last few years owing to rising focus towards energy security and the application of flex-fuel vehicles. Bioethanol demand in North America was 32,562.7 thousand TOE in 2019 and is estimated to expand at a CAGR of 5.9% from 2020 to 2027.

Major factors fueling the regional market growth include high demand for green fuels, stringent environmental regulations, and high investment for the development of biofuel refineries. Factors, such as technological advancement and rising awareness regarding biofuel being a clean fuel are anticipated to further drive regional growth. In the U.S., 49 states have implemented ASTM D6751 as state law and now been mandated to enforce the ASTM D6751 biodiesel standard.

Polish bioethanol consumption witnessed a rise in 2018 as mandates gradually escalated slightly, and a limited share had been fulfilled through the use of biodiesels. During the same year in the Netherlands, biofuel consumption grew because of increased taxes and higher mandates on diesel cars. In Sweden, bioethanol consumption has been dropping, prominently owing to the dip in E85 sales as government energy taxes for flex-fuel cars paved hurdle for the biofuel application.

Transportation biofuel consumption is needed to triple by 2030 and has to be on the trail with the Sustainable Development Scenario (SDS). This compares the 10% of global transportation fuel demand, to be compared with the current level which is around 3.5%. 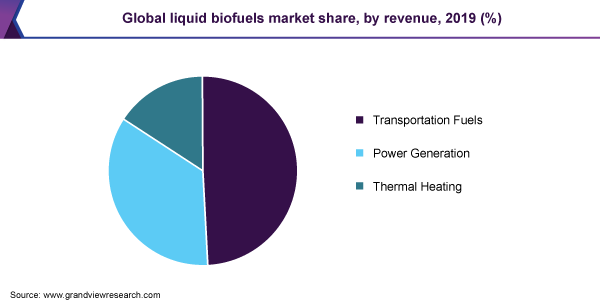 India and Brazil are estimated to witness a rise in liquid biofuel production as both countries have recorded the highest production levels across their region. This factor is anticipated to accelerate the market further which is yet to achieve sustainable development scenario volume for 2030. In terms of bioethanol production, Brazil recorded the highest production levels across Central and South America. Brazil has also announced its plans to scale up and mandate the usage of biodiesel from 10% to 15%.

North America has dominated the global market over the past few years, owing to the abundance of feedstock and arable area for biofuel production. U.S., Brazil, the European Union, and China are anticipated to be some of the major regions driving the demand for liquid biofuels. However, other economies such as Thailand, Indonesia, Canada, Australia, and Philippines are anticipated to create significant opportunities for the biofuel industry. Concerning the long-term global impact of biofuel potential, growth of the bioethanol and biodiesel markets is primarily based on the availability of agricultural land for non-food production.

The Canadian Clean Fuels Standard (CFS) has anticipated to apply various norms for gaseous, liquid, and solid fuels combusted for energy production coupled with the transportation sector. The Canadian government has been focusing on the achievement of annual reductions by 30 Mt in Greenhouse Gas (GHG) emissions by 2030, contributing to the country’s effort to achieve an overall GHG emission reduction of 30% by 2030.

Central and South America market have been propelled owing to rising government initiatives and increasing focus on energy security and independence. Furthermore, the high dependence on fossil fuels is compelling the distinct governments in the region to look for alternatives. Moreover, bio-fuels provide an excellent solution to the crisis of depleting fossil fuels in countries such as Brazil, Venezuela and others.

Top market players have adopted sustainable sourcing strategies in view of the long-term benefits and current regulatory scenario. Companies are focusing on delivering long-term value to shareholders to grow and sustain in the market. The key players are building a robust and low-risk strategy that has been anticipated to provide a strong foundation for the shareholders. For instance, in August 2018 Archer Daniels Midland Company (ADM) launched a new oilseeds facility in Egypt in collaboration Cargill Inc. to gain a prominent presence in the Middle East and Europe markets.

The companies have started expanding their business through various mergers and acquisitions in order to cater to this rise in demand. For instance, ADM; Green Plains; Valero Energy Corporation; Pacific Ethanol Inc.; Butamax; and Renewable Energy Group, Inc. (REG) have acquired various regional companies across the globe to gain and maintain market dominance. Some of the prominent players in the liquid biofuels market include:

This report forecasts volume and revenue growth at global, regional, and country levels and provides an analysis of the latest industry trends in each of the sub-segments from 2016 to 2027. For the purpose of this report, Grand View Research has segmented the global liquid biofuels market report on the basis product, application, and region:

How big is the liquid biofuels market?

What is the liquid biofuels market growth?

Which segment accounted for the largest liquid biofuels market share?

b. Bioethanol captured a market share of nearly 73.0% in 2019 due rising adoption for propulsion and easy availability.

Who are the key players in liquid biofuels market?

What are the factors driving the liquid biofuels market?

b. Key factors that are driving the market growth include government support through programmes, policies and low GHG emissions.