The global biodiesel market size was valued at USD 32.09 billion in 2021 and is expected to grow at a compound annual growth rate (CAGR) of 10.0% from 2022 to 2030. Biodiesel is a renewable, clean-burning diesel substitute that can be used in existing diesel engines without requiring any modifications. It is composed of a growing variety of recycled cooking oil, agricultural feedstock, and animal fats. Increasing demand for biodiesel to replace traditional fossil fuels in power generation and automotive applications is projected to boost the market growth. On account of the existence of numerous dealers and suppliers, the market is highly fragmented. 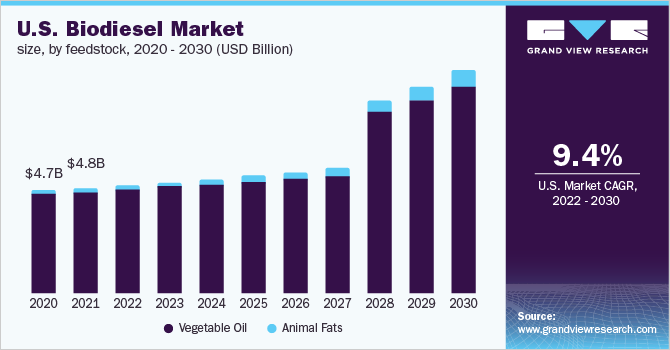 However, the demand-supply gap caused by insufficient production capacity and a large scope for R&D in feedstock selection for product manufacturing is expected to create opportunities for new market players. The growing demand for environmentally friendly fuels that ensure complete combustion and can reduce Greenhouse Gas (GHG) emissions is a major factor driving the market. The high compatibility of biodiesel with the existing diesel engines is also driving the demand. The increasing population and the subsequent growth in the number of vehicles and other industries using biodiesel are also expected to boost the demand for biodiesel.

Biodiesel has a high demand in the automotive industry as it emits less GHG. As a result, the demand in the U.S. is expected to witness arise over the forecast period. The U.S. is one of the largest producers of soy. Soy is used as a feedstock for biodiesel after crushing. In March 2017, soybean oil was the largest feedstock used to produce biodiesel and accounted for 360 million pounds of the overall 857 million pounds of feedstock followed by corn oil and canola oil. Developing countries, such as India, China, Brazil, and some EU countries, intend to replace 10 - 20% of total fossil-based fuels with biodiesel used in the transportation sector.

Furthermore, a growing preference for replacing fossil fuels, which are associated with higher GHG emissions, with biofuel, which is renewable and biodegradable, is influencing demand growth in these countries. COVID-19 had an impact on the demand for biodiesel for the first half of 2020. The demand fell during the coronavirus pandemic. Furthermore, the increasing demand for eco-friendly and GHG emission-reducing gas is anticipated to aid the market growth. Also, government aid like subsidies and imposing mandates indicates continued growth of the market.

Based on feedstock, the market has been further categorized into vegetable oils and animal fats. The vegetable oils feedstock segment is further sub-segmented into canola oil, soybean oil, palm oil, corn oil, and others. Simultaneously, the animal fats segment is sub-segmented into poultry, tallow, white grease, and others. In 2021, the vegetable oil segment accounted for the largest share of more than 97.00% of the global revenue. However, raw material selection varies by region, based on the availability and feedstock cost. Palm oil is expected to be a major feedstock for the market and has been widely used in the production of biodiesel in countries, such as Indonesia, Thailand, Germany, France, and Colombia.

Indonesia and Thailand dominated palm oil production, accounting for more than 80% of total output, with a large portion of the product used for biofuel production. Whereas the European countries were reliant on imports of feedstock from these Asian countries for biofuel production. Other vegetable oils, such as UCO and rapeseed, accounted for a significant portion of the industry, accounting for more than 17% of total feedstock demand. China and India are expected to be the most important markets for UCO-based biodiesel in Asia Pacific (UCOME). However, uncertainty about product availability has been a major concern for UCOME manufacturers in these regions, weighing on growth.

Based on application, the global market has been further divided into fuel, power generation, and others. In 2021, the fuel application segment dominated the global market and accounted for the largest share of more than 77.7% of the overall revenue. The automotive fuel segment dominated the demand for the product in 2021. The industry is expected to benefit from increased demand for fuel in commercial vehicles as a replacement for crude oil as it emits fewer Volatile Organic Compounds (VOCs) than traditional fuels, such as diesel. 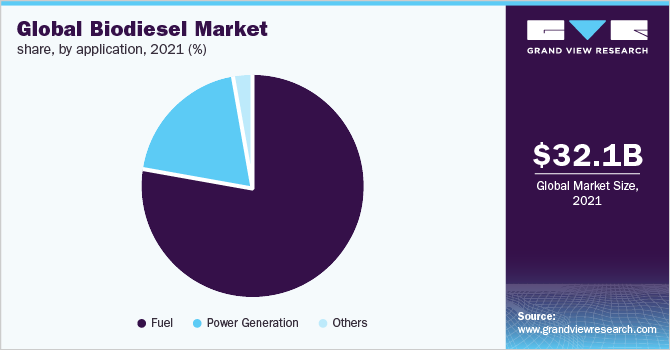 Because it is biodegradable, free of aromatics and sulfur, and non-toxic, the product finds application in the marine industry and is expected to grow at a significant CAGR over the forecast period. Furthermore, the agricultural sector’s growth, combined with increased mechanization, is expected to drive product demand in agricultural applications over the forecast period. Governments around the world are constantly attempting to adopt renewable energy sources to generate power to reduce GHG emissions. As a result, the demand for the product in power generation applications is expected to grow at a significant CAGR from 2022 to 2030.

Europe accounted for a share of more than 46.7% of the global market in 2021 and is expected to grow at a steady CAGR from 2022 to 2030. It has historically been the largest market for the product due to early acceptance of the product in the region as well as government emphasis on replacing carbon-emitting sources with bio-based sources. Rapeseed oil, UCO, palm oil, soybean oil, animal fats, and sunflower oil are the most common feedstocks used to produce biodiesel in Europe. The product demand in the region is primarily driven by Germany, which accounts for the highest share of feedstock production among the European countries.

The low-interest rate on raw materials is expected to lead to a rise in consumption, thereby propelling the overall regional market growth over the forecast period. Asia Pacific is also projected to register a significant CAGR from 2022 to 2030. Thailand is likely to be one of the fastest-growing markets, as demand for diesel-powered automobiles in the region is increasing rapidly. Malaysia and Indonesia produce more than 80% of palm oil creating a great opportunity for biodiesel manufacturing.

The industry is highly competitive on account of the strong presence of major manufacturers. The companies’ production facilities are located near port areas, allowing for efficient fuel delivery. As a result, the cost of transportation falls, which is expected to boost participants’ profit margins over the projected period. Existing producers are expected to finance the expansion of their production capacities and geographical reach to support their market presence. Some of the prominent players in the global biodiesel market include:

This report forecasts revenue growth at global, regional, and country levels and provides an analysis of the latest industry trends in each of the sub-segments from 2019 to 2030. For this study, Grand View Research has segmented the global biodiesel market report based on feedstock, application, and region:

How big is the biodiesel market?

What is the biodiesel market growth?

Which segment accounted for the largest biodiesel market share?

b. Vegetable oil dominated the industry accounting for 95.44% of the overall feedstock consumption in 2021 for biodiesel production owing to technology know how by majority of the manufacturers and high oil yields offered by these products.

Who are the key players in biodiesel market?

What are the factors driving the biodiesel market?

b. The increasing threat of fossil fuel depletion and need to include renewable sources of energy in energy mix for a sustainable growth is anticipated to drive the demand for biodiesel.