The global liquid nitrogen market size was estimated at USD 15.33 billion in 2019 and is expected to expand at a compound annual growth rate (CAGR) of 5.6% from 2020 to 2025. Globally, increasing demand for LN2 in industrial gas and electronic products market is projected to be a key factor driving the market growth.

Environmental health and safety authority has provided safety measures for safe handling of liquid nitrogen. Growing chemical and metal manufacturing industries in both mature and upcoming economies are providing an opportunity for the market to rise over the coming years. Increasing use of LN2 for cooling the electronic products during the manufacturing process is projected to propel the industry from 2017 to 2025. 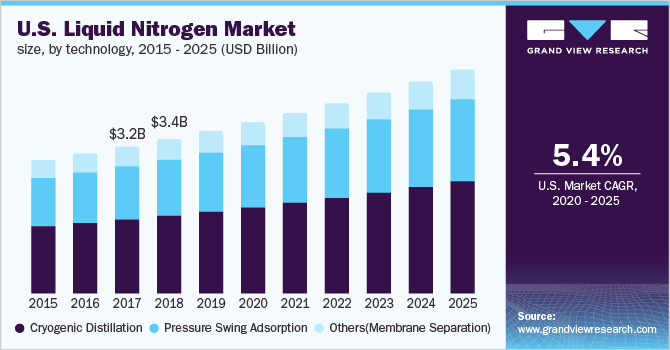 Increasing demand for liquid nitrogen as a coolant and refrigerant among various end-use industries such as healthcare, metal fabrication, food & beverages, rubber & plastic, automotive, electronics, pharmaceuticals, and construction is projected to propel the market over the coming years.

Presently available modern electronics have semiconductors incorporated in them to facilitate electron control. Semiconductors enable conductivity between metals and insulators. They are usually subjected to high temperatures. In supercomputers, semiconductors need to be kept at a constant temperature as supercomputers run highly complex calculations and perform millions of functions in just one second. The processors form the core of supercomputers and take majority of the workload from highly complex functions. Such operations heat up the system, which, thus, needs to be controlled.

Liquid nitrogen is employed in dermatology for freezing and preventing the growth of precancers, benign growths, and skin cancers. Such cancers and benign growths are treated by means of spraying or applying liquid nitrogen with the help of a cotton swab. The thawing process, which includes freezing of tumors and ailments and damages the cells, thus, hindering their growth.

Liquid nitrogen is also used for storing cells and biological samples at low temperature to preserve tissue samples obtained from various surgeries for the purpose of study. It is also used incryoconservation for preserving animal and human genes. Increasing demand for such applications of liquid nitrogen in the healthcare sector is expected to drive market growth over the forecast period.

According to a news report by British Broadcasting Corporation, published on 15th October 2012, Gaby Scanlon,an 18-year-old girl from Heysham, Lancashire, had to undergo an emergency surgery as she consumed a cocktail containing liquid nitrogen. She was diagnosed with pierced or perforated stomach. Such hazardous effects of liquid nitrogen combined with its complex handling procedures are anticipated to restrain market growth over the forecast period.

Cryogenic distillation dominated the technology segment in 2019 and is expected to be the largest segment across the forecast period. It is a cost-effective technology used to produce industrial gases such as nitrogen, argon, and oxygen. Rising utilization in the fabrication of semiconductor devices is anticipated to augment market growth.

This is the largely used technology to produce liquefied industrial gases due to its low investment cost and a few utility consumption. Polaris Company has developed a purification process for gases at low temperatures using cryogenic distillation technology. Applications involved in cryogenic distillation are the purification of argon, oxygen, carbon monoxide, and light hydrocarbons.

Pressure swing adsorption (PSA) technology is expected to grow at the highest CAGR over the forecast period. This technology provides an air separation process from gases without liquefaction. Rising demand for pressure swing technology owing to its low operating cost is expected to boost the market over the next eight years. Increasing investments by companies such as Air Products & Chemicals Inc. and Praxair for the development of liquid nitrogen technologies is projected to propel the market over the forecast period.

Due to extreme low-temperature properties, LN2 is used in innovative technologies of cooling and freezing. Coolant is expected to gain the largest market share of around 60% of the overall functional segment. It is highly used in application areas where spray cooling, injection cooling, or immersion cooling is required.

The refrigerant segment is projected to grow at a faster rate over the coming years. Increasing use of liquid nitrogen as a refrigerant in areas such as medicine, industry, research, and cooking is expected to fuel the market growth. In its industrial applications, it is used for rubber removal, temporary ground freeze, metal hardening, and pipe freezing.

In medicine, LIN is used as a refrigerant to maintain low temperatures in biological materials and cryobanks; for instance, cryocans, portable devices store semen at extremely low temperatures. It is also used to store reproductive cells such as sperm & egg, preserve blood, and tissue samples.

Whereas in research LN2 is used to freeze vacuum units and store cellular materials. In cooking, liquid nitrogen is used to make desserts and other related items along with the storage and transportation of food products. Rising application areas of LN2 as refrigerant is expected to spur this industry over the next eight years. 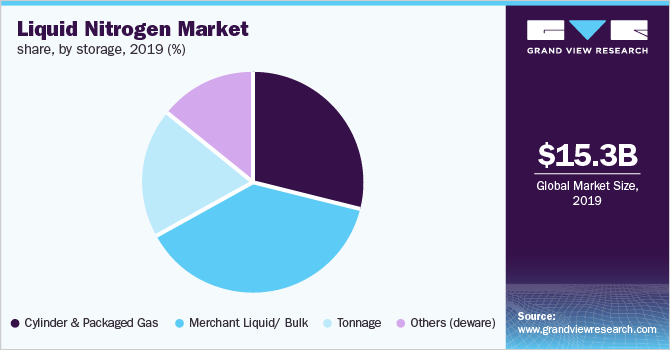 Liquid nitrogen is preferred to be stored in under-ventilated areas. Storing and handling of liquid nitrogen is a major challenge, and to avoid risks and hazard factors such as burns, container failure, spillage, personal injury, and damage to containers, proper care has to be taken. Cryogenic storage tanks are majorly used for the storage of liquid nitrogen.

According to the British Compressed Gases Association (BCGA), LN2 is not supposed to be commuted in cars. Dewars are expected to be transported in vehicles with a bulkhead. Dry insulated gloves are used while handling the equipment, which got into contact with liquid nitrogen to avoid direct skin contact.

The chemicals & pharmaceutical segment is expected to be the fastest-growing end-use segment. Increasing use of liquid nitrogen in the pharmaceutical industry to retain the cold reaction temperature for medicines is expected to boost the market over the next eight years. Rising demand for the healthcare sector is a driving factor for the industry.

The metal manufacturing & construction segment emerged as the largest end-use segment accounting for over 41% of the total market revenue in 2016. Increasing use of the product as an industrial gas in metal refining and fabrication process is projected to fuel the market growth over the forecast period.

Liquid nitrogen is used to chill, cool, preserve, and freeze the items in the food & beverage industry. Its properties help in increasing the shelf life of the products. Due to non-adverse effects on the environment and low initial investment cost on equipment over conventional mechanical freezers, it is widely expected to be used in the food & beverage industry over the forecast period.

Major areas where liquid nitrogen is used by the food industry are freezing of bakery products, meat, poultry, fish in addition to prepared meals, vegetables, and fruits. Other end-users include cryotherapy, automotive, and electronic sectors. In electronics, it is used as a cooling agent in manufacturing products.

North America was the leading liquid nitrogen market and accounted for around 35% of the total market revenue in 2019. Rising developmental activities is projected to propel the market over the forecast period. Increasing number of manufacturers and suppliers in this region is expected to boost the market. 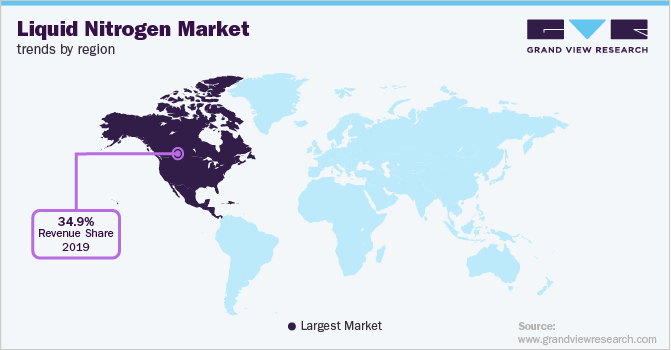 Asia Pacific is expected to be the fastest-growing regional segment. Emerging economies in a region including India and China have been experiencing strong economic growth. Increasing population and living standards have spurred the market demand in food & beverages, construction, electronics, and pharmaceutical sectors.

According to the Associated General Contractors of America (AGC), the construction industry contributes majorly to the economy of the U.S. and creates structures worth around USD 1.4 trillion annually. According to the U.S. Census Bureau, monthly new residential construction in the country as of March 2022 stood at 1,873,000 building permits, 1,793,000 housing starts, and 1,303,000 housing completions. The rapidly growing construction industry in the country is anticipated to bolster the demand for liquid nitrogen in construction application over the coming years.

China is the largest producer and supplier of LN2 in this region. China’s rapid urbanization is supported by strong economic growth. People in the country are migrating to urban cities with higher earnings. Asia Pacific was the second largest segment following North America, which accounted for around 23% of the total market revenue in 2016.

Rising developmental activities in Asia Pacific is projected to propel the market over the forecast period. Growing income level is expected to boost the demand for high-end electronic products. Increasing growth in chemicals and metal manufacturing industries to supply the raw materials for the manufacturing and construction sector is anticipated to augment the market.

China is one of the largest construction markets in the world and has one of the highest urbanization rates globally. The construction sector accounted for over 6.9% of GDP during the period 2016 to 2020 and employed around 53.66 million people in 2020. In January 2022, the Housing Security Department announced that around USD 6.5 million affordable rental units would be built to relieve the pressure on the housing market. This is expected to boost the construction sector thereby having a positive impact on the liquid nitrogen market.

The construction sector in India consists of the urban development segment and real estate. According to the India Brand Equity Foundation, the country is expected to become the third-largest construction market by 2022. Supportive government initiatives such as ‘Smart Cities Mission’ and ‘Housing for all’ is predicted to fuel the construction industry in the country thereby driving the demand for liquid nitrogen.

Increasing company product offerings for the end-use industries such as infrastructure, construction, metals & steels, food & beverages, power & energy, and pharmaceuticals are expected to be a key parameter for being competitive in this market. Growing acquisitions being undertaken as an attempt to strengthen the presence and gain industry share.

This report forecasts revenue growth at global, regional & country levels and provides an analysis of the industry trends in each of the sub-segments from 2014 to 2025. For the purpose of this study, Grand View Research has segmented the global liquid nitrogen market on the basis of technology, function, storage, end-use, and region. 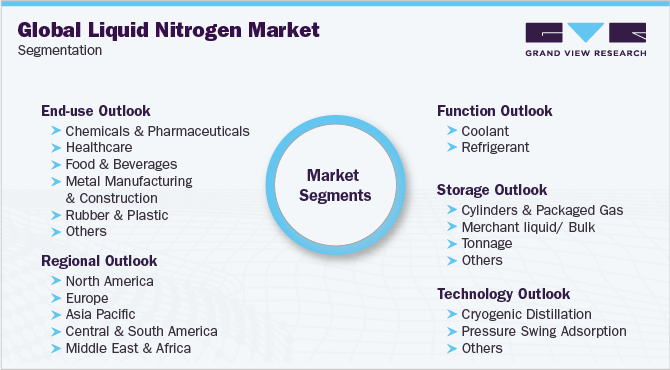